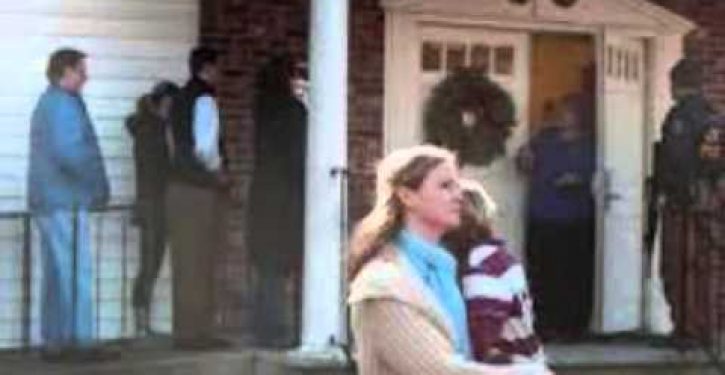 A sampling of the morning’s headlines suggests that members of the liberal media are largely in agreement over what action needs to in response to the Sandy Hook massacre. “On Guns, Take Action Now,” urges the Washington Post’s Eugene Robinson. “Let’s Get M.A.D.D. About Guns,” New York Times opinion writer Joe Nocera suggests.

Not all liberal commentators are in lock step with this prescription, however. Radio talking head Thom Hartmann presents a fresh theory on the reasons behind the shootings (h/t Weasel Zippers):

The primary message of hard-right talk radio and Fox News is [that] income inequality is a good thing, [that] there shouldn’t be taxes, high taxes, on the rich. […]

People say, ‘What’s the matter with Kansas? Why do, why do people in red states vote for Republicans?’ Because they’re inherently — because of the inequality. They are inherently — ‘paranoid’ is almost too strong a word, but distrustful, and that leads to a whole variety of social ills, including increased rates of homicide.

Let’s examine these propositions, beginning with income inequality. The Paris-based Organisation for Economic Co-operation and Development did a study in December of 2011 on wealth disparity in the most economically developed countries in the world. The research design is flawed insofar as it fails to take into account the income gap between the richest and poorest in underdeveloped countries, such as Swaziland, whose king hoards most of the nation’s wealth, but it will have to do.

For the study, countries were ranked using the “Gini coefficient,” a metric that reflects income equality, where zero represents perfectly equal distribution and one represents maximum inequality.

So, how many mass shootings have occurred in Chile? That depends on whether you include state-sponsored violence against citizens. If you don’t, the number is at zero. It is true that a van containing 14 bodies was discovered near the Mexican town of San Luis Potosi in August of 2012, but police never found — or never revealed — the identity of the assailants.

But what about Hartmann’s second proposition, that this problem didn’t exist so much in the ’50s, ’60s, and ’70s? If we are limiting the crime to school shootings, then the total for those three decades is 43. And that excludes the sensational murder of 13 people at the University of Texas at Austin in 1966 by crazed gunman Charles Whitman. Even more damning to Hartmann’s theory is that in the 2000s both the mass murder and homicide rates dropped to their lowest levels since the 1960s.