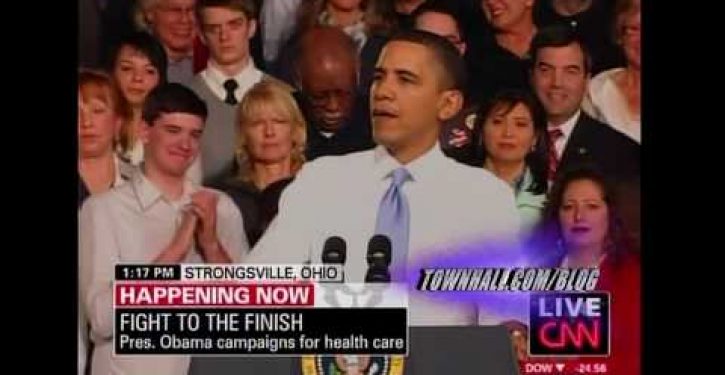 Obama: “Your employer is estimated to see his premiums fall by as much as 3,000%, which means they could give you a raise.”

Reality:
Your raise will have to wait:

Blue Shield of California seeks rate hikes up to 20%:

Health insurer Blue Shield of California wants to raise rates as much as 20% for some individual policyholders, prompting calls for the nonprofit to use some of its record-high reserve of $3.9 billion to hold down premiums.

In filings with state regulators, Blue Shield is seeking an average rate increase of 12% for more than 300,000 customers, effective in March, with a maximum increase of 20%.

Some consumer advocates and healthcare economists say Blue Shield shouldn’t be raising rates that high when it has stockpiled so much cash. The company’s surplus is nearly three times as much as the Blue Cross and Blue Shield Assn. requires its member insurers to hold to cover future claims.

The company also expects higher costs from an influx of new customers under the federal healthcare law in 2014.

“It’s a once-in-a-lifetime change in the healthcare market that will bring a lot of volatility, and we need higher reserves for that,” Wagner said.

Even with these proposed rate increases, Blue Shield said, it expects to lose money in the individual insurance market in 2013.

The insurer said its medical costs for this segment of the business grew 10.6% and what it actually pays is rising 12.5% after adjusting for its portion after customer deductibles.

And Blue Shield is not alone,

The state’s largest for-profit health insurer, Anthem Blue Cross, cited a similar jump in medical costs in seeking rate hikes as high as 25% for some individual policyholders, effective in February.

Also in California, Kaiser Permanente is seeking to raise rates an average of 9% for 220,000 individual policyholders next month.

Nowhere near that 3,000% “premium fall” Obama had us expect.