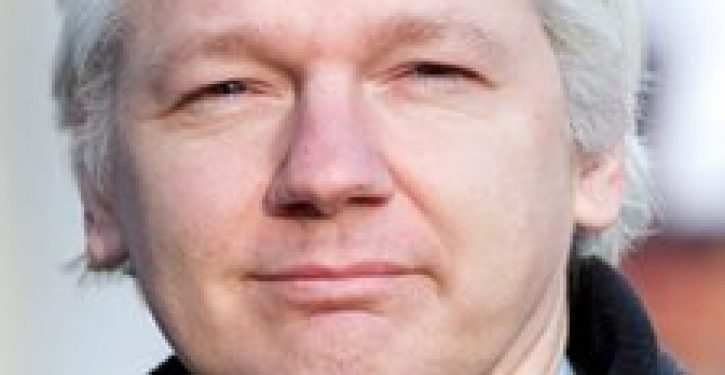 WikiLeaks founder Julian Assange, possibly [language warning] the most annoying and arrogant person in the whole world, is still hiding at the Ecuadorian embassy in London, while portraying himself as a champion of freedom of expression.

As long as it’s his freedom of expression, that is. When Erin Burnett asked him:

“When you talk about governments clamping down on people’s right to speak, Ecuador is an unlikely champion of your call for free speech,”

“All governments have their problems,” Assange said. “I’m not here to talk about these little things about Ecuador or whatever. Come on, let’s be realistic.”

The self-proclaimed champion compounded his insult by adding that “Ecuador is insignificant!”

Assange may not have wanted to upset Rafael Correa, who granted him asylum at the embassy, on Correa’s human rights record, but his ego couldn’t take not being the focus of attention.

Ecuador’s Criminal Code still has provisions criminalizing desacato (“lack of respect”), under which anyone who offends a government official may receive a prison sentence up to three months and up to two years for offending the president. In September 2011 the Constitutional Court agreed to consider a challenge to the constitutionality of these provisions submitted by Fundamedios, an Ecuadorian press freedom advocacy group. A new criminal code presented by the government to the National Assembly in October does not include the crime of desacato, but if approved would still mandate prison sentences of up to three years for those who defame public authorities.

Under the existing code, journalists face prison sentences and crippling damages for this offense. According to Fundamedios, by October 2011 five journalists had been sentenced to prison terms for defamation since 2008, and 18 journalists, media directors, and owners of media outlets faced similar charges.

But hey, when you’re living in Knightsbridge rent-free, that sort of thing is “insignificant.”

Previous Post
Is the TSA on its way out? We can only hope
Next Post
Today is our official launch!