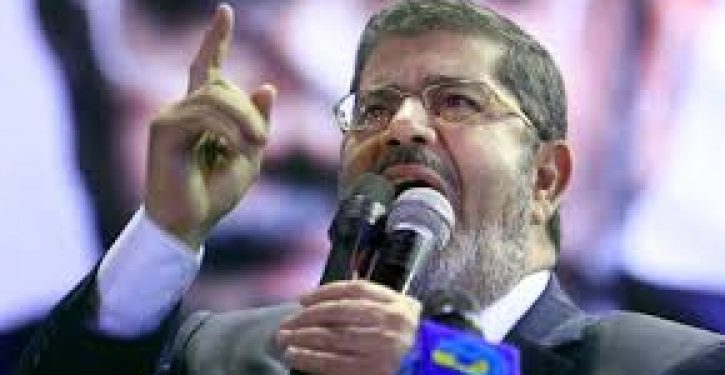 Eyes on the ball, folks.  In strategic terms, the most important thing that has happened in the last 10 days is that Mohammed Morsi has assumed dictatorial powers in Egypt.  Courageous Egyptians are protesting that move, but Morsi has less compunction than Mubarak did, and we can expect the protests to be dealt with effectively.

And his Napoleonic self-crowning event changes the calculus for Gaza and Hamas, among other things.  The universal interpretation of the ceasefire brokered by Egypt this week puts the responsibility for preventing attacks by Hamas against Israel squarely on the Morsi government.  (Not all analyses refer to “frantic” diplomacy on the part of the United States.)  Far from making Egypt anyone’s partner in repressing Hamas, this move effectively hands Hamas over to Morsi – and with Hamas, the Gaza Strip.

Hamas is a terrorist group whose independence of him is an inconvenience for Morsi.  Hamas is the finger of Iran in the Levantine “pie” situated on Morsi’s northeastern border.  Hamas lies between Morsi and Jerusalem.  Morsi is not going to “work with” Hamas; he is going to give Hamas the choice to work with him, or be rendered insignificant.

Hamas can be useful to Morsi, if that’s what its leaders choose to do.  There may or may not be a “break” with Iran; it would probably be better from Morsi’s perspective to keep Iran on a string with Hamas, and prevent a divergence of objectives – i.e., between Egypt and Iran – for as long as possible.

But do not be deceived.  Iran has just taken a big strategic hit from the terms of the Egyptian-brokered ceasefire.  Iran may still have Qods Force operatives in the area, but Morsi has established a veto over Iran’s activities there.  There may be a few more attempts by Hamas at independence from Morsi – although frankly, I doubt it – but the die is cast: what happens from now on will happen on Morsi’s timeline and his say-so.

That, at least, is what he intends.  He has been rather transparent in the last few days.  Immediately upon getting the ceasefire on terms advantageous for his intentions, he declared himself all-powerful in Egypt.  This was not a coincidence.  His pursuit of the ceasefire was part and parcel of his overall planning.  He was happy to accept the vaguest of commitments on Israel’s side, as long as the understanding was that Egypt would guarantee Hamas’s behavior.  That was the prize Morsi sought.

Now he has started clearing the way to make good use of that prize.  Morsi is on the move.  He is moving very quickly to consolidate power, and position Egypt as a force to be reckoned with in the “race to Jerusalem.”  No longer a sleepy, despotic backwater, Egypt is now ready to play on the same field as Iran and Turkey.  We can expect Morsi to play off Turkey and Iran, remaining on good terms with both as he will seek to do with the US and Europe.  It won’t be time for a “break” with anyone until Morsi has acquired an advantageous position for inducing the fall of Jerusalem – the denouement sought eagerly by the Muslim Brotherhood, and hollered about often by Morsi himself.

In the near future, Morsi may well be able to keep Hamas in check in Gaza, a condition that might make some Israelis and Americans complacent about the turn of events.  I think we’ll know in the next month whether Hamas and Iran will try to restore the status quo ante, by recovering strategic independence from Egypt.  If they wait longer than that, their opportunity will have passed them by.  My guess is that they won’t make the attempt, however, and that Morsi has established himself as a new fact of the geopolitical landscape.

This will not have the effect of making him more moderate or conventional.  It can be said, meanwhile, that his ascent could not have happened, and certainly not so quickly, without the assistance of the United States.  At each step along the way, the US could have shown the kinds of useful leadership that we simply have not shown since the beginning of the Arab Spring.

Part of having regional partnerships is caring what happens to your partners, and besides Israel, the US had longstanding ties with Egypt, Saudi Arabia, Jordan, Bahrain, Tunisia, and Morocco, and newer but very productive relationships with Iraq, Qatar, UAE, and Oman.  Until Morsi was elected this summer, there was no inevitability about a despotic Islamist tendency from the Arab Spring.  If we date it to June 2009, however, with the Green Revolution in Iran, the Obama administration’s record of untimely passivity regarding both human rights and geopolitical outcomes goes back three and a half years.  Morsi now has no reason to suppose that American objections to his power grab will matter.

Saudi Arabia has a lot to think about.  The Middle East already sees that the Palestinian statehood bid is an outdated gambit.  The players are out of position: Fatah, with its US and European money and long ties to Saudi Arabia, is not the right scion of Islamism to have in charge of the West Bank.  Its whole enterprise is a relic of a different time.  Fatah, like Hamas, will have to adapt to the new reality.  But can the Saudis adapt?  And Jordan?

I don’t think Mahmoud Abbas wants to be Morsi’s boy.  But although Abbas’s patrons haven’t dropped him, their patronage suddenly matters a lot less.  This was inevitable when Obama was reelected; that it has happened so soon is the point of interest.  Benjamin Netanyahu may have been under pressure from the US when he accepted the ceasefire, and may have seen the need for a time-out to regroup.  But what they’re regrouping for on the other side of the fence is a game-changer.  Next time, it won’t be “Cast Lead Part II.”  There’s a new Pharoah in town, and he’s on the move.