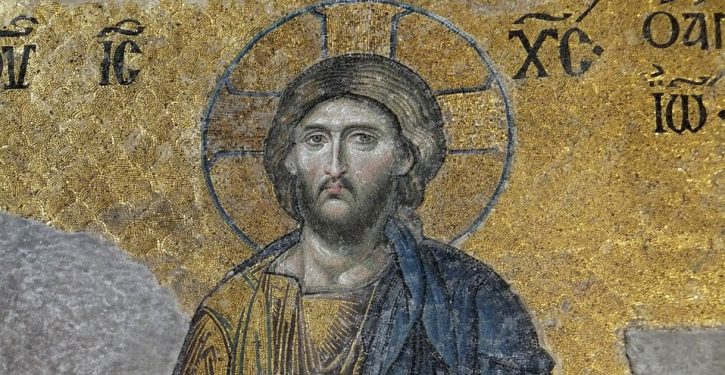 Thanks for joining our study. Special thanks to all the Townhall readers who submitted their Top 10 favorite Bible verses. I was overwhelmed and overjoyed to receive so many thoughtful submissions. The author and winning list (although they are all “winners”) will be featured and credited in Bible study Vol. 153 on Feb. 19.

In addition to the many Top 10 lists, I was blessed when several readers told me about one of their favorite Bible verses and what it means to them. That said, with her permission, I felt called to feature insightful commentary about John 14:6 sent by Lynn M. Abare from Burke, New York. You might recall that John 14:6 was included on my Top 10 list. More discussion follows after Lynn’s inspiring message.

“Jesus answered, ‘I am the Way, the Truth, and Life. No one comes to the Father except through me.’”  Lynn wrote:

“Jesus tells us He is ‘the Way.’ Jesus is the only Way to the Father and to a life with Him into eternity. He told us in John 14:2-3 that He goes to prepare a place for us, and since He cannot lie, we can have the faith to believe.

“Jesus tells us that He is ‘the Truth.’ As the embodiment of unadulterated truth, Jesus cannot lie. And because He cannot lie, we can fully trust in His infallible Word. When we believe this, we understand that Genesis 1:1, ‘IN THE BEGINNING,’ means we accept that God always was and always will be without beginning or end.

“Jesus tells us that He is ‘the Life and no one comes to the Father except through Him.’ Jesus is the only way to eternal life. Jesus cannot lie, so when He tells us He is the way, He means it. There are not several ways to eternal life in Heaven with God the Father, God the Son, and God the Holy Spirit. There is only ONE way, Jesus.

“As believers, we have what the world will never have. We have the faith to be the calm in the middle of the storm. We have the surety of God’s love, and we have the capacity to forgive what the world considers unforgivable. And that is because when we accept Christ as our Lord and Savior, God forgives us for the sin of rejecting His Son and welcomes us into His eternal family.”

On behalf of all Townhall readers, I thank Lynn for sharing your heart for Jesus and love of His Word. Now, I add more context to Lynn’s message.

In the few years following Christ’s Resurrection (around AD 31-33) — what today we call “Christianity” was a nascent movement known as “the Way.” That name is mentioned for the first time in Acts 9:2.

Thus, when Jesus said, “I am the way.” He was telling His apostles that He was the mediator between God and Man, the Savior of the world, and believing in Him was THE only way to eternal life. Thus, “the way” was such a true and powerful message that it became the early “brand name” (to use a modern phrase.) People often forget that the way Christianity began was “the Way” representing the absolute truth.

Important, too, are the verses John 14:1-7 when Jesus comforted His disciples about His forthcoming betrayal and death and said:

“‘Do not let your hearts be troubled. You believe in God; believe also in me. My Father’s house has many rooms; if that were not so, would I have told you that I am going there to prepare a place for you? And if I go and prepare a place for you, I will come back and take you to be with me that you also may be where I am. You know the way to the place where I am going’” (John 14:1-4).

Next, I love how the apostle Thomas DOES NOT know “the way” and is not shy to admit he does not know. Moreover, Thomas asks with a “we” to include the other apostles who are unclear about where Jesus is going:

And Thomas (if you are reading this from Heaven), thanks for asking that question. You prompted the greatest answer in the history of the world. So let’s repeat it together, shout it from the rooftops, and make it go viral:

“I am the way, the truth and the life, no one comes to the Father except through me.”

Praise God, we live in a nation where we can say that aloud and live that truth without being arrested, tortured, and martyred, as were Jesus’s apostles, along with believers through the centuries, and those persecuted In His Name throughout the world at this time. Pray for them!

Myra Kahn Adams is a conservative political and religious writer with numerous national credits. Her book, “Bible Study For Those Who Don’t Read The Bible,” reprints the first 56 volumes of this popular study. “Part 2,” with the same title, reprints Vols. 57-113. Order it here.

Myra is also the Executive Director of SignFromGod.org and the National Shroud of Turin Exhibit, two ministries dedicated to Shroud of Turin education. Contact: MyraAdams01@gmail.com and Twitter @MyraKAdams.

‘China’s Global Mega-Projects Are Falling Apart’
Next Post
‘A Violent Start To The Year’: Murders Are Already Soaring In These Six Major Cities