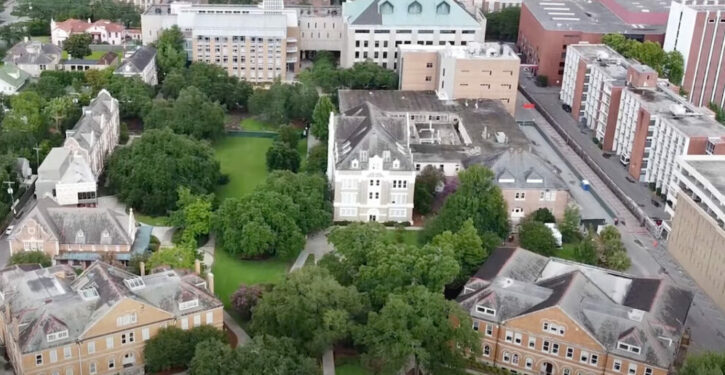 Tulane University is investigating a student after her op-ed defending Kanye West, who goes by “Ye,” allegedly caused “outrage and pain” on campus, the Foundation for Individual Rights and Expression (FIRE) reported Jan. 16.

Student Sarah Ma’s opinion piece, “Ye Did Nothing Wrong,” was published Jan. 11 in the College Dissident. Ma insisted West should not have been “canceled” for claiming he would go “death con 3 On JEWISH PEOPLE” or wearing a “White Lives Matter” jacket, according to the op-ed.

“Using an analogy, as he often does, Ye was referring to defending himself against the Jewish people who wronged him,” Ma argued.

“Simply put, most of the people who have wronged Ye are Jewish,” she continued, specifically referencing the rapper’s lawyers and a psychiatrist who “misdiagnosed Ye with a mental health disorder.”

“Often, if something happens to one black person, like a white cop killing George Floyd, it involves the entire black race,” Ma continued. “So if black people do not have the luxury of being recognized as individuals, why should Ye, a black man, give any other group the luxury of recognizing sinister individuals by name instead of by group?”

Associate Vice President and Dean of Students Erica Woodley sent an email to the student body Jan. 12, condemning Ma’s article and saying the university’s Office of Student Conduct will investigate the matter, according to a screenshot of the letter shared by FIRE.

“Tulane strongly condemns all forms of antisemitism, anti-Blackness, and all forms of bias and discrimination,” Woodley wrote, according to the screenshot of her letter. “While the importance of free expression on a university campus cannot be overstated, words that run counter to our core values impact our community.”

FIRE is a “nonpartisan nonprofit dedicated to defending freedom of speech.” The group has called on Tulane to drop its investigation into Ma’s article, arguing the op-ed is fully protected under the university’s Demonstration Guidelines.

“While Tulane is a private school not bound by the First Amendment to protect students’ expressive rights, it has independently ‘committed to an environment in which a variety of ideas can be freely expressed and critically examined,’” FIRE Program Officer Sabrina Conza wrote in a letter to the university Jan. 16, quoting Tulane’s Demonstration Guidelines.

“The article expresses certain viewpoints—that Ye had reason to want to go ‘death con 3’ on Jewish people and that Ye should not have been ‘canceled’—but it does not reference any student at Tulane, nor does it target any student,” Conza continued in the letter.

“Tulane must immediately end its investigation without punishing Ma,” Conza added, according to the letter.