55% of trans women who have “bottom” surgery are in so much pain years later they need medical attention, according to data in a Canadian study. Moreover, reports the Daily Mail:

Up to a third of patients also struggled to use the toilet or suffered sexual issues 12 months after the operation, which sees patients transitioning from male to female given a surgically constructed vagina.

Researchers from the Women’s College Hospital (WCH) in Ontario, Canada, analyzed the medical records of 80 patients who sought care from the clinic between three months and five years after having the operation.

Campaigners say the findings demonstrate that complex surgeries like vaginoplasty often carry risks that patients are unaware of – at a time when there has been a dramatic uptick in the number of gender reconstruction surgeries in the US and Canada.

The number of patients going under the knife increased more than 150-fold between 2010 and 2018, according to research published in LGBT Health.

Aother recent study found that the alleged benefits of “gender-affirming care” are “no greater than a placebo effect.” Moreover, “There is strong evidence that this medical pathway causes physical harm. It can lead to infertility and loss of future sexual function; among multiple side effects, bone health suffers.”

A Freedom of Information lawsuit earlier revealed that Biden’s Department of Health and Human Services promoted gender transitions for minors without consulting with key experts at the FDA. The FDA has warned that the puberty blockers used by minors in gender transitions can have dire side effects, such as brain swelling and permanent vision loss.

In March 2022, the Department of Health and Human Services issued a document promoting gender transitions for young people, including “puberty blockers” “during puberty”, “hormone therapy” from “early adolescence onward”, and “gender-affirming surgery” (such as removal of breasts and testicles) either in “adulthood or case-by-case in adolescence.”

Strangely, this HHS guidance document, titled “Gender Affirming Care in Young People,” was issued not by HHS agencies that have expertise in transgender issues (such as the Food and Drug Administration, which regulates drugs such as puberty blockers), but rather by the Office of Population Affairs, which deals with family planning, teenage pregnancy, and adoption.

In Newsweek, former FDA official David Gortler expressed concern about this, and asked why the Office of Population Affairs was “even commenting on gender transition treatments….As a former senior executive FDA drug safety official, I have to wonder why my 20,000-plus former colleagues at the FDA are not speaking out after being circumvented on transgender clinical pharmacology recommendations by an obscure, obviously unqualified HHS office.”

The FDA recently added a warning to the puberty blockers used by transgender children undergoing gender transitions. The warning was added after the FDA identified “a serious potential side effect” that can “cause a dangerous surge of spinal fluid pressure in the brain,” as well as “headaches, nausea, double vision, and even permanent vision loss.”

As Gortler noted in Newsweek, the HHS “gender affirming care”

document claims to outline an established standard of care on how to proceed with social, pharmacological and surgical “affirmation” of children and adolescents who identify as transgender. When announcing the new document, Assistant Secretary for Health Rachel Levine went so far as to state “there is no argument among medical professionals—pediatricians, pediatric endocrinologists, adolescent medicine physicians, adolescent psychiatrists, psychologists, etc.—about the value and the importance of gender-affirming care.”

Levine’s extreme statement was rightly rebuked by physicians and members of Congress for not being appropriately based in evidence.

At first glance, the HHS/OPA document gives the impression that anyone and everyone should just start writing prescriptions and scheduling surgical procedures upon request. Observant scientists and clinicians will notice the document is most remarkable for what it doesn’t say.

As a pharmacologist, pharmacist and research scientist who has dedicated his life to drug safety, drug development and evidence-based clinical and non-clinical science and medicine, I have some important questions—starting with who the authors of this document are, and what academic credentials they have.

Puberty blockers and cross-sex hormones for gender transition are all off-label, non-FDA-approved use. I’d be curious what published studies were the basis for the HHS/OPA recommendations regarding the use of those drugs. Were existing FDA- and non-FDA drug safety databases reviewed to assess risk to gender-appropriate and gender-incongruent application and administration? More importantly, was anyone from the FDA even consulted, and if not, why not?

Hunter Biden Said He Paid Nearly $50,000 A Month To Live At House Where Classified Docs Were Discovered, Document Shows
Next Post
Cartoon of the Day: Crook by Hook 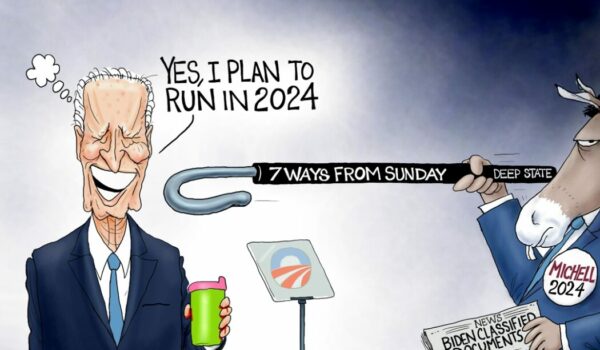