A judge can’t condition a parent’s custody rights on not making “unfounded allegations of abuse,” because that is a prior restraint forbidden by the First Amendment, according to Division 2 of the Washington State Court of Appeals.

In today’s ruling in Chandler v. Chandler, the courts of appeals noted that Child Protective Services had found that a father had sexually abused two of his daughters, a finding that a trial court judge reversed, with the trial judge stating, “the Court is not convinced on a more probable than not basis that actual sexual abuse occurred.” This finding relied on the testimony of “a licensed mental health counselor and mediator” who had acted “as a reunification counselor” with “all members of the Chandler family”.

Based on this finding, the trial judge gave visitation rights to the father, but left the mother with primary physical custody. However, it added:

Any further unfounded allegations filed with Child Protective Services by or at the instigation of [mother] will be grounds for suspension of her rights under this Order when those allegations are brought to the Court’s attention by a motion.

But the appeals court overturned that order as a prior restraint forbidden by the First Amendment, stating:

The United States Supreme Court defines prior restraints to include “administrative and judicial orders forbidding certain communications when issued in advance of the time that such communications are to occur. Temporary restraining orders and permanent injunctions—i.e., court orders that actually forbid “speech activities—are classic examples of prior restraints.” There is a heavy presumption that prior restraints are unconstitutional. Therefore, prior restraints are allowed “in only ‘exceptional cases such as war, obscenity, and incitements to acts of violence and the overthrow by force of orderly government.'”

In Meredith, a husband, Anthony P. Meredith, argued that the trial court violated his First Amendment rights when it prohibited him from “contacting any agency” regarding his wife’s, Jazmin Muriel’s, immigration status. The court ordered that “‘[a]ny contact that Mr. Meredith believes to be necessary must first be approved by this court through the undersigned judge/department.'” On appeal, the court concluded that “Meredith had the right, as does everyone in this country, to make a valid report to government authorities regarding Muriel’s presence in the country” and “the order is clearly a prior restraint that forbids Meredith from speaking in the future.” Because the order prohibited not only unprotected speech but also speech protected under the First Amendment, the court concluded that it was an unconstitutional prior restraint.

The Meredith court relied on In re Marriage of Suggs (Wash. 2004). In Suggs, the trial court found that Shawn Suggs harassed her former husband and the court permanently restrained her from “‘knowingly and willfully making invalid and unsubstantiated allegations or complaints to third parties which are designed for the purpose of annoying, harassing, vexing, or otherwise harming Andrew O. Hamilton and for no lawful purpose.'” The Supreme Court determined that the order was a prior restraint “because it forbids Suggs’ speech before it occurs.” The Supreme Court also stated that the order chilled Suggs’ speech because it did not specifically state what she could say and language that she thought was valid could “ultimately be found invalid and unsubstantiated.” …

As in Meredith and Suggs, the trial court’s order does not prohibit only unprotected speech; rather, the order prohibits all reports to CPS that are ultimately determined to be unfounded. Although the order does not specifically prohibit particular language, it could encompass speech by Kimberley and other potential reporters that they believe valid and substantiated even if CPS ultimately determines that they are not. The result of the order also may chill Kimberley’s, as well as other potential reporters’, ability to make any report at all based on fear that the allegations would ultimately be determined to be unfounded. Thus, the trial court’s order is a prior restraint on speech.

The First Amendment right to petition the government for a redress of grievances “‘extends to all departments of the [g]overnment.'” This right extends to “petition ‘any department of the government, including state administrative agencies.'”

In Meredith, the court stated that “a citizen does not lose the right to petition the government merely because his communication to the government contains some harassing or libelous statements.” The court noted that although Meredith could contact a government agency in order to harass or commit libel, a court “may not institute a sweeping prior restraint of government petitions based on … past bad deeds.” The court ordered that the challenged order must be vacated as, again, it prohibited both protected and unprotected speech and petitions.

Because a report that is ultimately determined to be “unfounded” may encompass both valid complaints as well as unprotected speech and petitions, we vacate the trial court’s order that further unfounded allegations to CPS filed by Kimberley or instigated by her would be grounds for the suspension of her rights under its final order.

Dem-Boosted Republican Nominees Get Wiped Out
Next Post
Cartoon of the Day: Vegetative State 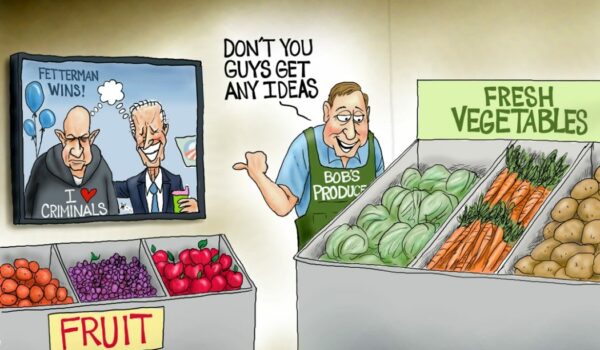