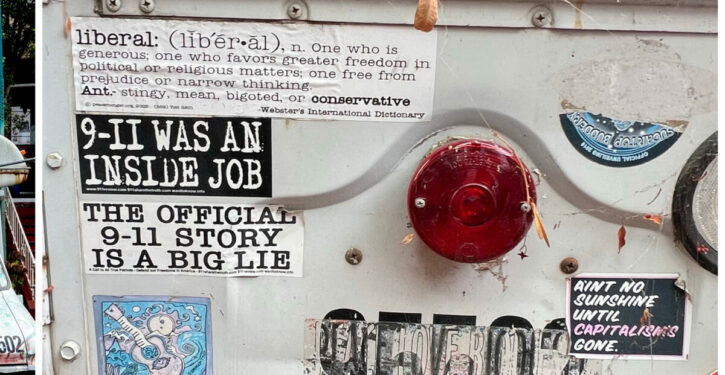 The camper van parked in the driveway of the home belonging to David DePape’s ex-partner. The “Natural addiction treatment” that it’s advertising is of the psychedelic ibogaine. The bumper stickers on the camper are left-wing and conspiratorial. One says "Ain't No Sunshine Until Capitalism Is Gone."

As Michael Shellenberger notes, progressive “politicians yesterday blamed the political Right for the brutal attack on House Speaker Nancy Pelosi’s husband Paul.” “This attack,” said San Francisco’s state Senator, Scott Weiner, “is terrifying and the direct result of toxic right-wing rhetoric.” It is true that the attacker did share QAnon and right-wing conspiracy theories. But as Instapundit noted, “The man who attacked Paul Pelosi is reportedly a “former Castro nudist protester.”  The alleged attacker, David DePape, is a nudist hippie who was part of a pro BLM commune.

DePape’s politics have little rhyme or reason. In past years DePape shared a post about Stephen Colbert’s 2006 roast of President George W. Bush at the White House Correspondents dinner; linked to videos of Disney films altered to make it look like the characters were swearing; and claimed, “Jesus is the anti-Christ” — not exactly a litany of right-wing tropes.

And, as I discovered yesterday, DePape lived with a notorious local nudist in a Berkeley home, complete with a Black Lives Matter sign in the window and an LGBT rainbow flag, emblazoned with a marijuana symbol, hanging from a tree. A closer look reveals the characteristics of a homeless encampment, or what Europeans call “an open drug scene.” In the driveway, there is a broken-down camper van. On the street is a yellow school bus, which neighbors said DePape occasionally stayed in. Both are filled with garbage typical of such structures in homeless encampments. People come and go from the house and the vehicles, neighbors say, in part to partake in the use of a potent psychedelic drug, ibogaine.

Neighbors described DePape as a homeless addict with a politics that was, until recently, left-wing, but of secondary importance to his psychotic and paranoid behavior. “What I know about the family is that they’re very radical activists,” said one of DePape’s neighbors, a woman who only gave her first name, Trish. “They seem very left. They are all about the Black Lives Matter movement. Gay pride. But they’re very detached from reality. They have called the cops on several of the neighbors, including us, claiming that we are plotting against them. It’s really weird to see that they are willing to be so aggressive toward somebody else who is also a lefty.”

One of the bumper stickers on the back of his family’s camper said “Ain’t No Sunshine Until Capitalism’s Gone.” That’s not exactly “right-wing rhetoric.” 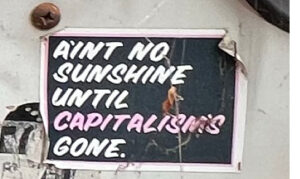 Ironically, if Pelosi had her way, more violent criminals would be released and in a position to attack innocent people like her husband. Pelosi backed legislation that would have released most federal inmates in certain age categories, or with certain health conditions (including temporary or treatable ones). Those prisoners would have been released, even if they had previously committed serious crimes such as murder, rape, and robbery.

That legislation, which passed the House but not the Senate, included provisions that would have released prison inmates because they are over age 50 or under 18. They could be released even if they had recently committed murder, and had served almost none of their sentence. These provisions were found in the so-called “Emergency Community Supervision Act.” It would have required the “Bureau of Prisons” to “place in community supervision” — supervised release — all prisoners who are “50 years of age or older,” or below age 18. (It also would have required the release of prisoners with less than a year left on their sentence, and inmates with a “health condition,” such as pregnancy, diabetes, “minor skin cancers,” or a weakened immune system.)

So if a 50-year-old murderer had just been put in prison, after being sentenced to 20 years, he could be released. It wouldn’t matter that he hadn’t served any of his sentence. Releasing such inmates is risky, since murderers can go on to kill again even when they are over 50. Famous serial killers were still active at age 50: Albert Fish started killing at age 54, and Dorothea Puente started at age 53. Peter Tobin kept killing until he was 60, and John Reginald Christie killed people until he was 53.

In theory, the bill allowed some dangerous prisoners to remain jailed, if prison authorities ask the courts to keep them in prison, and a court found strong proof that a prisoner poses a “specific” rather than generalized risk of violence. But it is hard to predict a specific violent crime even when the risk of violence is real. Criminals aren’t that predictable. They often commit different crimes after being released than they did in the past. Most murderers never kill again, but some do.

The bill didn’t allow inmates to be kept in jail just because it is slightly more likely than not that they will commit more acts of violence. To keep a dangerous inmate from being released, a judge would have had to find “by clear and convincing evidence” that the inmate poses “a specific and substantial risk of causing bodily injury to or using violent force against the person of another.” Even if a judge found such a risk, he could still have released an inmate after taking into account the inmate’s “age” and whether detention will affect “access to adequate medical treatment.”

Thus, the bill would have made it very hard to keep murderers in jail, especially murderers over the age of 50. That’s bad, because even elderly inmates can kill again. A transgender murderer was arrested for killing again at age 83, after two prior murder convictions. And Albert Flick killed a woman when he was 76, stabbing her at least 11 times while her children watched. He had previously been imprisoned for killing his wife by stabbing her 14 times in front of her daughter. After his first murder, he assaulted a woman in 2010, but he avoided a long prison sentence for that, because a judge deemed him too old to be a continuing threat.

Pelosi may have felt that juvenile offenders deserved a second chance. But reducing or eliminating penalties for juvenile offenders, such as killers, increases the violent crime rate.  As Peter Moskos notes, “Recidivism among 16-year-olds went up” a lot when the age for being prosecuted in adult court was raised in New York, including for violent crimes. Carjackings by teens are already skyrocketing, as fewer teens get prosecuted in adult court or sent to prison. Many violent crimes are committed by minors: Over 5% of murderers whose ages are known to the FBI killed before age 18.

What Some Schools Are Teaching Kids Is So Obscene, Parental Rights Activists Can’t Even Read It On TV
Next Post
State Department’s rescue program had 325,000 unread emails, even as it funded foreign drag shows