There isn’t any emergency that would justify selling the government’s already-depleted oil reserves to the public. No hurricane or natural disaster has disrupted oil supplies, and there is no war in the Middle East. No shortage of oil exists. Yet Biden is planning to sell part of America’s depleted Strategic Petroleum Reserve, in hopes of keeping oil prices from rising until after the election. Doing so is illegal.

The Biden administration will announce the sale of 14 million crude oil barrels from the Strategic Petroleum Reserve (SPR) this week, set to lower gas prices before the November midterm elections, according to Reuters. The administration will direct the Energy Department (DOE) to auction the remaining 14 million barrels after President Joe Biden authorized the sale of 180 million barrels of oil in March to bring down gas prices, Reuters reported Tuesday, citing sources familiar with the situation. The White House is desperate to lower the price of gasoline due to concern that high prices could weaken the Democrats’ chances of winning key congressional and gubernatorial races on Nov. 8.

Biden has continuously blamed Russia for making gas prices “too high” and previously stated that he wasn’t finished with bringing down prices at the pump. The White House also threatened Saudi Arabia to not cut oil production before the midterm elections; however, Saudi Arabia and the Organization of Petroleum Exporting Countries (OPEC) slashed production by two million barrels per day on Oct. 5. The national average gas price is $3.87 per gallon, 55 cents higher than it was in October 2021, according to AAA data.

The DOE will sell 26 million more barrels of crude to oil companies throughout fiscal year 2023, which began on Oct. 1, according to Reuters. The department will release its plans to buy back oil to refill the emergency stockpile, currently at its lowest level since 1984, and may continue repurchasing oil throughout 2025.

Biden won’t be able to keep gas prices from rising for long. After the election, they will rise again. In the past, there was a lot of oil in the Strategic Petroleum Reserve. But thanks to progressives, there isn’t enough oil in the reserve now to make a difference. Democrats kept President Trump from expanding the reserve back when oil was dirt cheap. The reserve now is now partly empty, and nowhere near its storage capacity.

In March 2020, President Trump proposed adding oil to the strategic petroleum reserve when oil cost only $14 per barrel (compared to well over $100 per barrel today), but Democrats blocked him from doing that. And rather than adding to the reserve, Joe Biden released oil from it on multiple occasions, such as 50 million barrels in November, 30 million barrels on March 1, and 180 million barrels beginning on March 31.

Critics note that Biden’s releases of oil are illegal, because they aren’t in response to an emergency, and have left the reserve with insufficient oil to respond to a true emergency. Biden’s actions violated the 1975 Energy Policy and Conservation Act, notes Mark Robeck, the former deputy general counsel of the Department of Energy. The law prohibits releases from the reserve unless there is a severe domestic supply shortage, an act of sabotage or natural disaster. There isn’t a shortage: gas prices in 2008 were as high, adjusting for inflation, as they are today, but no one in 2008 imagined that those high gas prices were proof of a shortage. Biden’s “unlawful release of oil from the SPR threatens national security by depleting” the Strategic Petroleum Reserve, Robeck said. 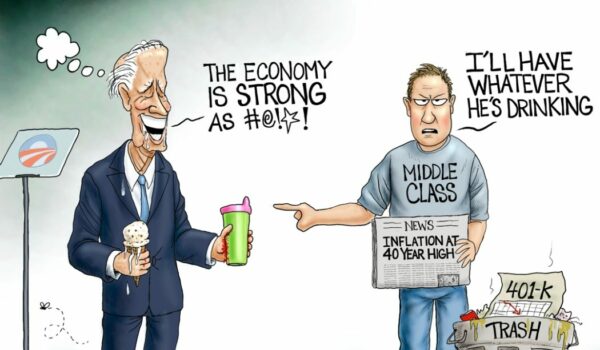