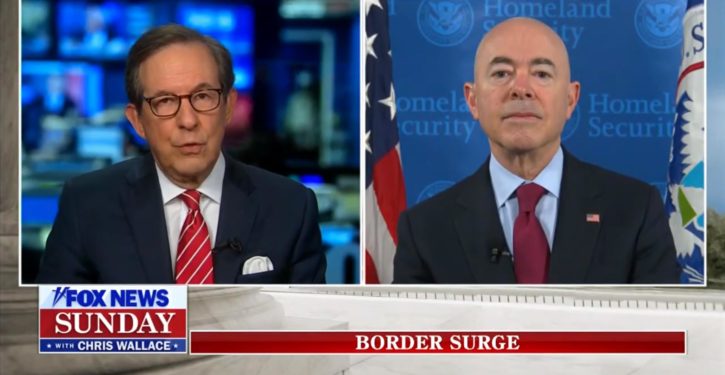 The Biden administration’s Department of Homeland Security (DHS) Secretary Alejandro Mayorkas was informed that the photographer who took pictures of horseback Border Patrol agents said that he and his colleagues didn’t see any migrants being whipped, according to emails obtained by Heritage Foundation.

The incident, which occurred on Sept. 19 when thousands of Haitian migrants crossed the border illegally into Del Rio, Texas, overwhelmed Border Patrol agents on the ground. The images that circulated of the incident showed the horseback Border Patrol agents, who have since been cleared of the whipping accusations, trying to address the situation, using the reins of the horses to push the migrants back; many commentators claimed the agents were “whipping” the migrants.

A DHS colleague sent an email to Mayorkas including a news interview with the photographer who captured the incident and claimed he didn’t see Border Patrol agents whip anyone, according to the Sept. 24, 2021 emails obtained via a Freedom of Information Act (FOIA) request and shared with the Daily Caller News Foundation. (RELATED: Border Patrol Calls In ‘Suicidologist’ To Address Rising Suicides Among Rank-And-File)

“The photographer behind the images depicting Border Patrol agents on horseback told KTSM things are not exactly what they seem when it comes to the photos,” read the news story, sent to Mayorkas by assistant secretary of DHS public affairs Marsha Espinosa, according to the emails.

“The photos caused outrage because from certain angles, it appears to show Border Patrol whipping migrants, but photographer Paul Ratje said he and his colleagues never saw agents whipping anyone,” the news story continued.

For Mayorkas, the images reminded him of “systemic racism,” he said at a White House press conference just hours after receiving the email, according to Fox News. Mayorkas also responded to the photographer’s statements, saying the situation “horrified the nation.”

“The horses have long reins, and the image in the photograph that we all saw, and that horrified the nation, raised serious questions about what…occurred and as I stated quite clearly, it conjured up images of what has occurred in the past,” Mayorkas said at the time, according to Fox News.

“There’s also a question of how one uses the horse and how one interacts with individuals with the horse,” he said, according to Fox News. “And so I’m going to let the investigation run its course.”

Several Democratic politicians accused the agents of “whipping” some of the migrants. The White House also condemned the agents on multiple occasions.

National Border Patrol Council President Brandon Judd said that the Biden administration’s knowledge of the photographer’s account and their statements that followed “proves” they “don’t care about the truth,” he told the DCNF.

“They certainly don’t want the American public to know the truth,” Judd said. “They specifically withheld facts from the American people so that the narrative would go forward.”

“They knew that it wouldn’t matter that the truth was going to come out later,” he added. “Because they know that the media is not going to cover it. So they went forward with a completely bogus story, misrepresenting facts and misleading the American public. That should not be tolerated from the President of the United States.”

U.S. Customs and Border Protection (CBP) found in July that the Border Patrol agents never whipped anyone. The agency did find that the agents “twirled” their reigns, which is not part of their training.

“I take responsibility. I’m president … It was horrible to see. To see people treated like they did, horses nearly running them over, people being strapped. It’s outrageous,” the president said at the time. “I promise you those people will pay… There will be consequences.”

“Whips are not part of Border Patrol training or equipment,” CBP Commissioner Chris Magnus said at the time.