Many bills to ban “solitary confinement” go way beyond banning solitary confinement, by giving inmates the right to spend most of their waking hours outside their cell — where incorrigible inmates go on to stab and slash other inmates and staff. Charles Lehman of the Manhattan Institute describes one disturbing example:

Even as violence remains at frighteningly high levels on Rikers Island, the New York City Council is moving to handicap the City’s Department of Correction (DOC), making it all but impossible to control unruly prisoners within the city’s jails.

A bill floated by liberal City Council members and expected to pass with a veto-proof majority has been presented by supporters as a ban on the use of solitary confinement and a move toward an “evidence-based” approach to detention. But at a hearing on the bill Wednesday, the DOC maintained that it would make the city’s jail even more dangerous, with Commissioner Louis Molina suggesting that it would increase violence “exponentially.”

Molina is right. While the bill is framed as a solitary confinement ban (a practice which is already essentially illegal), it would substantially limit the ability of DOC to control the hundreds of people who assault guards and other inmates each year.

The bill’s “ban” on solitary confinement is really a broad guarantee of out-of-cell time—14 hours a day. Individuals can be locked in their cell for more than two hours only “to de-escalate immediate conflict that has caused injury or poses a specific, serious and imminent danger to a person’s safety,” and even that confinement can last no more than four hours. It’s all a far cry from solitary confinement, which Amnesty International defines as 22 to 24 hours of in-cell time a day.

The “ban” is less important, however, than the bill’s constraints on the use of “restrictive housing”—stricter detention that serves as a consequence for offenses committed within jail house walls. Specifically, it would prohibit placing someone in restrictive housing until the Board of Correction finds they have committed a “Violent Grade I” offense. If an inmate slashes another, in other words, he couldn’t be moved out of the general population until he received a full hearing, with legal representation.

The bill also significantly limits DOC’s ability to discourage misconduct. It stipulates that DOC “shall use positive incentives to encourage good behavior in restrictive housing units and may use disciplinary sanctions only as a last resort in response to behavior presenting a serious and evident danger after other measures have not alleviated such behavior.” In other words, DOC would be bound to an all-carrot, no-stick approach to managing dangerous detainees.

Long-term solitary confinement is already illegal under New York State law. The HALT Act, passed last year by the state legislature, prohibits holding someone in restrictive housing for longer than 15 days, and prohibits its use entirely for those aged 21 and under, 55 and older, and with certain disabilities. The bill also guarantees even those in restrictive housing four hours of out-of-cell programming—a standard adopted by the DOC in 2019.

New York City jails are already remarkably chaotic. The federal monitor overseeing Rikers Island recently reported that there were nearly 190 stabbings and slashings in the first four months of 2022 alone—an 89 percent increase over the same period in 2021. There were also 265 assaults on staff, down 25 percent from the same period in 2021, but virtually unchanged from 2016, when the monitor was first installed to respond to the system’s level of violence.

Banning solitary confinement entirely for inmates 21 and under, as New York State already does, is extremely unreasonable. Such inmates can be quite dangerous, both to correctional officers, and each other. About 30% of all murderers whose age is known commit their crime at age 21 and under. The fact that an inmate is age 21 or below does not make the inmate any less dangerous, or have any relevance to whether they need to be put in solitary confinement to protect other inmates or staff. 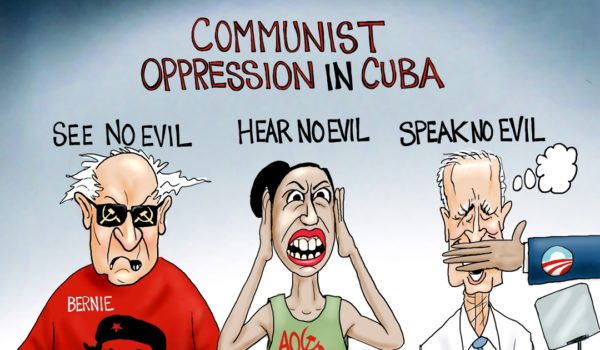 Protests Erupt In Cuba As Communist Government Fails To Restore Electricity Post-Ian
Next Post
Hurricane Ian causes up to $210 billion in damage, kills at least 80