“Our juvenile halls are on the verge of collapse. I really believe someone is going to get killed at some point,” one official told the Washington Examiner:

A series of state and local laws designed to clear California lockups have reached down to juvenile facilities where inmates learn now that they can get away with anything short of murder, officials said.  While politicians have been placing more juvenile offenders in the communities instead of behind bars, those left behind are the worst of the worst.

“The only kids we have detained are the most violent, aggressive, assaultive kids who have committed the most heinous crimes against society,” one Los Angeles County Probation Department manager told the Washington Examiner….two veteran probation officials who described a hopeless situation where officers routinely receive catastrophic injuries yet no support from county lawmakers who want a softer approach for juvenile offenders… the number of officers has shrunk by about 700 in recent years. Those who don’t retire from debilitating injuries are being driven out by PTSD…The Los Angeles County Board of Supervisors has downgraded use-of-force guidelines and forbidden the use of standard nonlethal weapons such as pepper spray and Tasers while instituting a hiring freeze….“We’ve had back injuries, fractures, and broken bones,” the officer said. “One officer recently broke his hip and had to have pins put in. He fell on a concrete floor during a restraint. These are 18-, 19-year-old kids who are used to fighting and a lot more durable than 40- or 50-year-old people.”

The situation has become so dangerous that staff members and officers have started to smuggle in contraband for inmates as a way of buying favor to avoid injury. Items include cellphones, laptops, and drugs….In 2020, Democratic Gov. Gavin Newsom signed a bill that ordered the closure of California’s four state juvenile prisons, which numbered 750 inmates, mostly convicted of violent felonies….These prisoners were transferred to less secure county juvenile jail facilities that are not designed to hold inmates charged with major crimes…In 2020, state juvenile prisons had populations with 14% convicted of murder, 37% for assault, and 34% for robbery….Newsom also signed a bill forbidding prosecutors from charging juveniles with a second violent felony while incarcerated. So while adult counterparts still faced additional time in prison, juveniles are now punished for whichever crime is the most severe — whether committed in jail or the initial crime for which they were sentenced. This gives inmates the incentive to assault staff, knowing nothing will happen to them, the officers said.

“I guarantee you, everyone who is working in those institutions are suffering from PTSD,” the manager said. “You cannot confront these kids for any negative behavior. We deal with physical and mental abuse every single day.”

Juvenile jails now contain the worst of the worst, as juvenile killers end up there rather than in adult prisons. Progressive district attorneys such as Los Angeles’s George Gascón and San Francisco’s Chesa Boudin stopped charging violent juveniles — including killers — as adults, meaning that 17-year-old serial killers won’t be held beyond age 25. That will increase the juvenile crime rate: As Peter Moskos notes, “Recidivism among 16-year-olds went up” a lot when the age for being prosecuted in adult court was raised in New York. Carjackings by teens are already skyrocketing, as fewer teens get prosecuted in adult court or sent to prison. Yet Gascón dismissed criminal charges against many violent juveniles, giving teens who commit robbery, arson, and sexual battery “restorative justice” (a slap on the wrist) instead of prison time. He did this even though longer prison sentences reduce crime. A study found that when California imposed longer sentences for repeat offenders, that deterred many crimes from being committed.

More details about Los Angeles’s juvenile jails are available at this link: https://www.washingtonexaminer.com/restoring-america/fairness-justice/inside-las-out-of-control-juvenile-jails-where-violence-rules-in-the-newsom-era 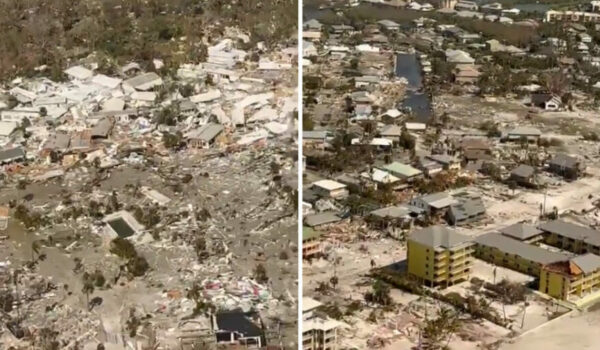 ‘It Will Need To Be Completely Rebuilt’: Aerial Footage Shows Devastating Aftermath Of Hurricane Ian
Next Post
Stocks Tumble On The Heels Of Another Disastrous Inflation Report