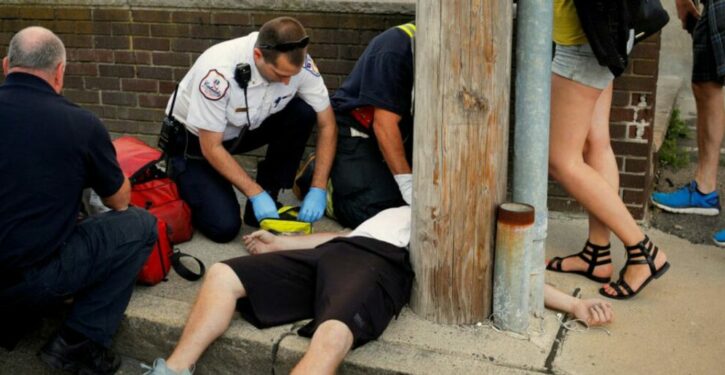 The opioid crisis cost the country $1.5 trillion during the COVID-19 pandemic and the lockdowns used to mitigate its spread in 2020, according to a Wednesday congressional report.

The cost is up 37% from 2017, when the Centers for Disease Control and Prevention (CDC) last tracked the information, according to a report from the Joint Economic Committee Democrats, which utilized CDC researchers’ calculation method to make its own estimate. A total of 93,331 people died from overdoses in the U.S. in 2020, a 50-year high, and opioids contributed to three-quarters of the total, according to the CDC. (RELATED: ‘Do Your Job’: Grieving Families Demand Action From The Biden Admin On The Fentanyl Crisis)

“As a result of the pandemic, the U.S. health care system was disrupted, reducing access to substance abuse treatment and exacerbating social and economic stress that can worsen addiction. This contributed to a significant increase in the number of Americans diagnosed with opioid use disorder and in the number of fatal opioid overdoses,” the report stated.

Cartels in Mexico create illicit fentanyl using chemicals made in China, according to the Drug Enforcement Administration (DEA). The potent narcotic is largely to blame for the continued increases in overdose deaths across the country.

Illicit fentanyl is smuggled into the U.S. mainly through the U.S.-Mexico border, where Customs and Border Protection (CBP) has seized around 12,900 pounds of the drug between October 2021 and August 2022.

Isolation and the economic shock of the pandemic also caused users to relapse from stress, according to the report.

Both the Trump and Biden administrations have moved to address the opioid epidemic.

During the Trump administration, the focus was on stemming the flow of illicit fentanyl across the border and placing the blame on the Mexican drug cartels as the main source of the issue. There were also efforts to provide treatments to addicts.

The Biden administration has also been focused on tackling addiction and drug trafficking by providing more resources to border authorities.

Opioid deaths cost $1.13 billion in 2019, according to the report. The total cost of opioid deaths is likely to increase due to a continued surge in overdose deaths, the report predicts.