Why does it take 25 FBI agents to arrest a single pro-lifer over an alleged assault? Especially when charges against him had already been dismissed in state court? But that’s what recently happened, in what appears to be a waste of taxpayer money, and perhaps a serious injustice as well. The Daily Signal reports:

Mark Houck, a pro-life, Catholic activist arrested last week by the FBI, plead not guilty to federal charges on Tuesday related to an October 2021 incident wherein he allegedly pushed an abortion clinic volunteer.

Authorities have charged Houck with violating the Freedom of Access to Clinic Entrances (FACE) Act, which criminalizes the use of force to intimidate or obstruct someone from getting or providing an abortion. On Tuesday, the father of seven plead not guilty to two counts, Fox News reported.

Houck’s attorney said that President Joe Biden’s Justice Department is pushing the charges as a form of “political prosecution,” the publication reported, noting that the case was already thrown out by the state court. Attorney Peter Breen added that the Justice Department is treating Houck, a long-time pro-life activist, as if he were a “drug lord or a mafia boss.”

“It put officers’ lives in danger,” the lawyer said. “It put the Houck family in danger. And it was an utter waste of judicial resources and taxpayer resources.”

According to federal court documents, Houck was arrested on the charge that he assaulted a 72-year-old volunteer, whose name is not provided, at the Planned Parenthood Elizabeth Blackwell Health Center abortion clinic in Philadelphia twice on Oct. 13, 2021.

The District Court in Philadelphia investigated and dismissed the charge earlier this summer, Houck’s wife, Ryan-Marie, told Life Site News. She said that her husband sometimes brought their eldest son with him. She added that on multiple occasions a “pro-abortion protester” would say “crude … inappropriate and disgusting things” to their 12-year-old son, such as “your dad’s a fag” and other vulgar slurs.

If the state court dismissed the charge this summer, then this federal prosecution  is an attempt to circumvent constitutional protections against double jeopardy. The Constitution’s double-jeopardy clause states that “No person shall . . . be subject for the same offense to be twice put in jeopardy of life or limb . . . . ”

But in the last couple generations, the Supreme Court created a loophole in constitutional protections against double jeopardy, ruling that it does not bar a later prosecution by a different sovereign — like a later prosecution by the federal government, of someone who has already been acquitted in state court. This is the so-called “Dual Sovereign Doctrine.”

So the courts won’t prevent this federal prosecution, just because essentially the same charge was found to be baseless in state court. 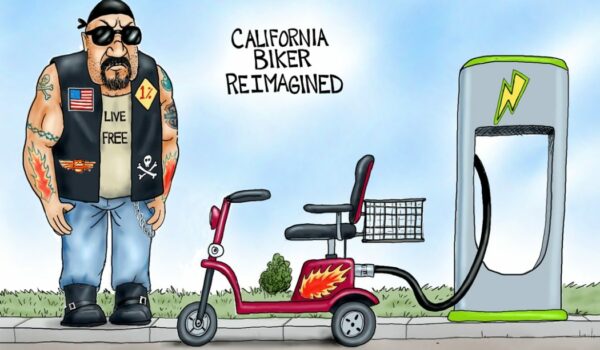