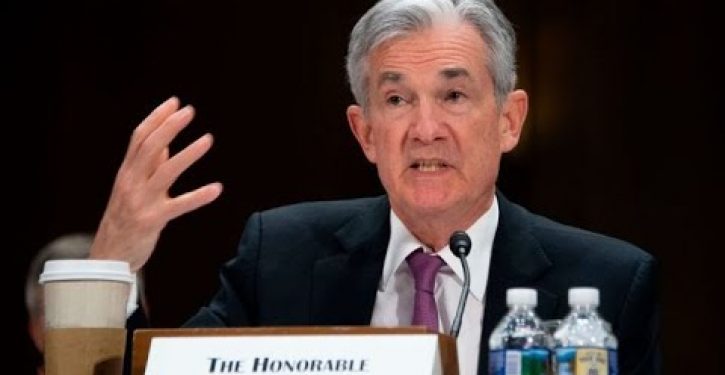 During Powell’s remarks Friday at an economic policy symposium sponsored by the Federal Reserve Bank of Kansas City in Jackson Hole, Wyoming, the chairman offered no useful wisdom to warn the White House and Capitol Hill. He offered no alarm over their reckless spending, from Congress’ falsely-named “Inflation Reduction Act” to Biden’s likely illegal student loan debacle that are directly stirring up headwinds against Powell’s own battle against inflation.

Instead, Powell simply offered a resigned, lackadaisical, passive acceptance of continued pain for American families who are now battered by twin rams of sky-high inflation and interest rate hikes. Powell said we can add to this rising unemployment, what he euphemistically sanitized as “softening of labor market conditions.” (RELATED: ANTONI: Dating Game: The Politics Behind The Timing Of Recessions)

“While higher interest rates, slower growth, and softer labor market conditions will bring down inflation, they will also bring some pain to households and businesses,” Powell said Friday. “These are the unfortunate costs of reducing inflation. But a failure to restore price stability would mean far greater pain.”

That pain is severe, with rising interest rates making housing prices unaffordable for many families. As Peter Nayland Kust reports, “The Federal Reserve’s interest rate hikes aimed at cooling off red-hot inflation are making collateral damage out of US mortgage lenders, many of whom are being forced into bankruptcy as sales volume in residential real estate markets plummets even as prices (for now) remain high.”

Powell — unlike his predecessors who waded into fiscal matters because they directly impact the Fed’s mission to preserve stable prices and strong employment — will not stand up to this Democratic fiscal madness. During a June congressional hearing, Powell refused to offer support for fiscal policies that will cut inflation, boost productivity and supply.

“We’re very focused on sticking to our knitting and carrying out the task that we’ve been assigned,” Powell said at one point, and later at different points. “I swore off getting involved in these fiscal debates … it’s really not our job … I don’t think it’s appropriate for the Fed or for me to be reaching out into areas of policy that are not assigned to us.”

Sticking to his knitting is part of why America suffered our 2022 recession. Powell and his Beltway colleagues were asleep at the wheel, myopic in refusing to acknowledge how profligate fiscal spending fueled today’s record inflation.

The first step in solving a problem is to acknowledge you have one. Today, Powell completely ignored the massive elephant in the room. He wasted an opportunity to bring some fiscal sanity to a Beltway crowd gone mad.

Make No Mistake About It, Biden’s Student Loan Plan Is A Handout For The Elite
Next Post
Appeals court blocks Biden from forcing doctors to do gender transitions