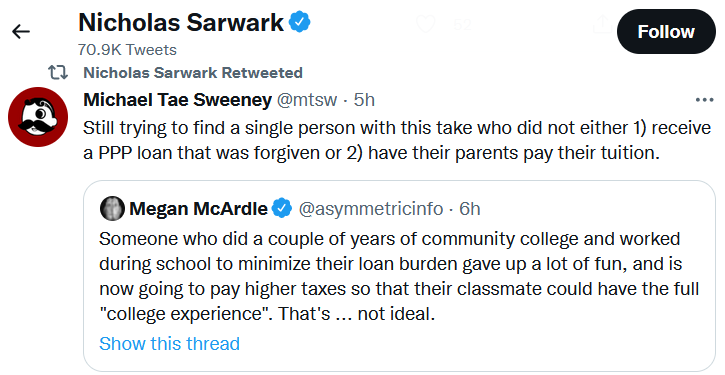 Nicholas Sarwark, the chairman of the Libertarian Party from 2014-2020, has been defending Joe Biden’s student loan bailout, which will cost taxpayers at least $427 billion, and perhaps well over $1 trillion. All conservative and libertarian economists think the bailout is a bad idea. So do even many Democratic economists, such as Jason Furman, chairman of President Obama’s Council of Economic Advisers, who called Biden’s plan “reckless.” Furman says “Pouring roughly half trillion dollars of gasoline on the inflationary fire that is already burning is reckless.” Biden’s plan will increase inflation, inequality, tuition, and the national debt. Even the liberal Washington Post calls Biden’s student-loan bailout “a regressive, expensive mistake.”

Neal McCluskey of the libertarian Cato Institute says Biden’s “massive debt cancellation will encourage even greater college price increases as schools and future borrowers will both expect more cancellation in the future,” and Biden’s action is “grossly unconstitutional.” As the College Fix notes, “An analysis from the Texas Public Policy Foundation concluded that [Biden’s] executive order bailout is likely illegal. Alan Dershowitz, professor emeritus at Harvard Law school, has also said that a student bailout through executive action would be illegal.” Writing off student loans will encourage colleges to jack up tuition, by making it more attractive to take out big loans to cover college tuition. When students are willing to borrow more to go to college, colleges respond by raising tuition. The Daily Caller notes that “each additional dollar in government financial aid translated to a tuition hike of about 65 cents,” according to the Federal Reserve Bank of New York

But Sarwark is a big fan of canceling student loans at taxpayers’ expense. He amplifies and repeats attacks on opponents of the bailout, such as Megan McArdle, a libertarian-leaning Washington Post columnist, and Chris Sununu, the governor of New Hampshire, using his Twitter account, as you can see from the tweets displayed below.

Sarwark mocks opponents of welfare and government handouts as tools of the wealthy and powerful. He approvingly retweeted a progressive attacking a conservative for opposing spending trillions of taxpayer dollars to write off student loans, including for wealthy professionals. The conservative correctly said, “Forgiving student debt is a massive windfall to the rich, to the college educated, and most of all to the corrupt university administrators of America. No bailouts for a corrupt system. Republicans must fight this with every ounce of our energy and power.” The Sarwark-approved response claimed without any evidence that opponents of canceling student loans “represent the interests of wealth” trying “to blunt support for a popular thing.”

In reality, canceling student loan debt is “regressive and unfair,” notes Katherine Abraham, the former head of the Bureau of Labor Statistics, who was an economic adviser to President Obama. As Greg Price points out, “Only 37% of Americans have a 4-yr college degree, only 13% have graduate degrees, and a full 56% of student loan debt is held by people who went to grad school. Biden’s plan to cancel it would be like taking money from a plumber to pay the debt of a lawyer.” 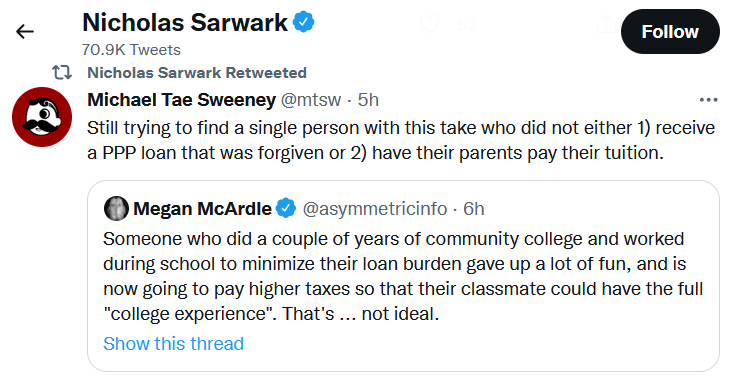 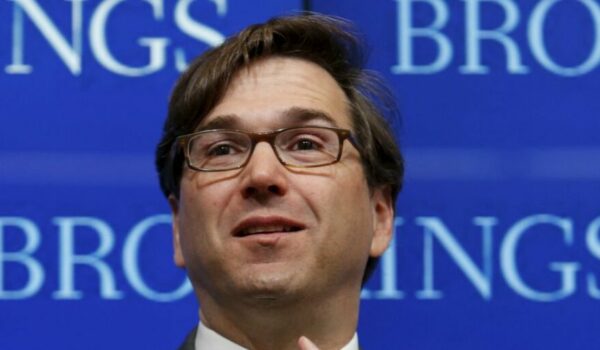