Colleges these days are more interested in teaching students to be “anti-racist” — that is, to falsely believe that racism causes all disparities between racial groups, and that racism can only be fixed by discrimination against white people — than they are in teaching them to write effectively. The result is that many college students cannot even write clear sentences.

“The University of Maryland Writing Center prioritizes ‘antiracism’ in in its new hires as well as in its self-description,” reports The College Fix:

The University of Maryland Baltimore’s Writing Center posted a job application to its website seeking a “writing consultant” for the university’s campus writing center.

The job lists as one of its “previous anti-racist coursework or activism” as one of its “preferred qualifications.”…Consultants work an average of 6-8 hours per week and “perform a variety of educational assistance, primarily through one-on-one peer consultation,” including help with course assignments, curriculum vitae, cover letters, grants and other writing projects.

The application also includes several brief essay questions, one entitled “Justice & Equity.” “As you can see in our mission statement, we express commitment to interrogating racism and white supremacy and injustice broadly,” the application reads. “ How would you want your work as a consultant to contribute to and expand your personal, scholarly, and professional work related to justice and equity?” Applicants are asked to respond in 250-400 words.

In the second paragraph of the “About Us” page of the University of Maryland Baltimore Writing Center, “antiracism” is brought up as a foundational commitment.

“We know that writing is way more than words on the page or the arrangement of grammatical units,” the “About Us” description reads. “We approach our work with writers with an anti-racist lens.”

Colleges are busy teaching this “anti-racism” — many college officials have urged the reading of How to Be An Antiracist. That is true even in universities in Republican-run states like Tennessee. The University of Tennessee’s chancellor, Donde Plowman, urged people “to read How to Be an Antiracist by Ibram X. Kendi.” Even in conservative states, progressives seem to have a firm grip on what is taught and what ideas to promote.

“Anti-racists” falsely claim racism is behind all outcomes where one group performs worse than another. “When I see racial disparities, I see racism,” says Ibram Kendi, in language trumpeted as if it were a sacred truth by the liberal New York Times.  This is not true, legally speaking: for example, a federal appeals court ruled in 2001 that a racial “disparity” in discipline rates does not “constitute discrimination,” if a school’s discipline policy is applied in a race-neutral way — even if most suspended students are black.

While progressive college English departments now teach students what opinions to hold about matters like race — with instructors giving students better grades for expressing woke dogma in their essays — they are consistently failing to teach students to write clearly and effectively.

College kids are failing when it comes to their writing skills because schools no longer teach them on this. This calls for an overhaul of the system so students can learn how to write again, John G. Maguire, a former professor on writing and author of a college writing guide says.

In an analysis posted on Washington Post, Maguire refers to the current dismal state of college students’ writing abilities, which he posits is mainly caused by colleges’ shift in the focus of their writing curriculum….“We have to stop kidding ourselves that students can write sentences when they enter college — because many cannot — and start teaching them how to do it,” Maguire says. “We need to revise writing courses and directly teach style — the readable style.”

With former teaching positions in several US colleges that span decades, including the Boston University School of Journalism, as well as a once-nominee for the Pulitzer Prize, Maguire is an authority in this field. He has also created writing guides for college kids, such as the Newsweek College Writing Guide and the Readability Method. In his latest analysis, Maguire points to a research by Richard Arum and Josipa Roksa in a book titled Academically Adrift: Limited Learning on College Campuses, which found that nearly half (45 percent) of 2,300 students at 24 colleges had made “no significant improvement” in critical thinking, complex reasoning and writing by the end of their second year in college. That finding shocked education experts when it was published a few years ago, with Bill Gates quoted as saying, “Before reading this book, I took it for granted that colleges were doing a very good job.”

Meanwhile, academic freedom is under assault. Faculty are being told that their research and courses must promote a specific, “anti-racist” ideology: the dogma that racial disparities are the result of racism, rather than other causes, such as the voluntary choices made by individuals. The Supreme Court has said that racial disparities are not presumptively due to racism, because reality shows otherwise. Researchers have often found that racial and gender disparities are explained by factors other than prejudice. But at universities across America, such conclusions are now taboo. Faculty are at risk of losing their jobs if their research discloses that something other than racism explains a racial disparity.

In an 8-to-1 ruling, the Supreme Court emphasized that there is no legal “presumption that people of all races commit all types of crimes” at the same rate, since such a presumption is “contradicted by” real world data showing big differences in crime rates. Thus, racial disparities in arrest or incarceration rates don’t violate the Constitution’s ban on racial discrimination (See United States v. Armstrong (1996)).

Discussing such realities is now dangerous on campus, as universities around the country impose rules requiring adherence to the ideology of “anti-racism,” and its goal of abolishing “racial disparities.” For example, Duke University says it it is revising its curriculum to be anti-racist, require students and staff to take “anti-racism” training, and “mobilize and expand Duke’s research capacity to … reduce racial disparities … in policing, justice, health, housing, education, labor and other domains of life.” Duke aims to transform itself into a global “research leader in anti-racism.”

Princeton faculty recently called for colleagues to be fired for “research” or “publication” that is “racist,” as part of Princeton’s transformation to an “anti-racist institution.”

Colleges focus on racial ‘diversity’ and ‘equity’ at the expense of free speech, study finds
Next Post
Cartoon of the Day: Bad Hog 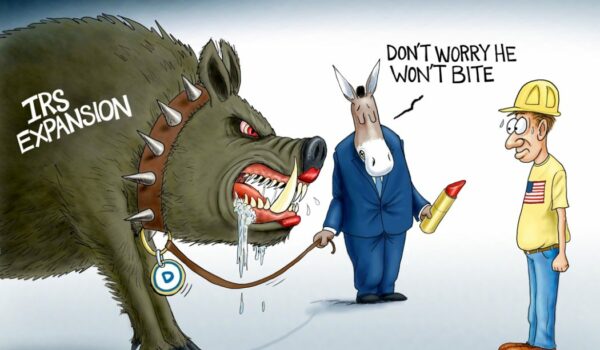