The lawyers who make up the plaintiffs’ tort bar are always on the lookout for a payday and the bigger the better.  That means they scan the news for commonly-used products and widespread practices that are later learned to be injurious.  Now, those lawyers are hardly the most popular group, but, like them or not, they often provide a powerful corrective to corporate power.  Time and again, tort lawyers have done what legislatures and regulators have refused to.  Consider asbestos, tobacco, opiates, etc.

Given that context, I make this prediction: within, say, two years, they’ll have set their sights on doctors and clinics that are currently pushing transsexual medical interventions on adolescents.

In depositions and courts, young adults will tell their heart-wrenching stories of being terribly confused about their sexuality as adolescents, seeking reliable, responsible guidance from experts, but being pressured into interventions without the time or maturity to properly analyze the information.  They’ll recall receiving drug treatments that damaged them physically and mentally and finally having doctors perform irreversible surgeries on them, all of which they now regret and about whose dangers they wish they’d known at the time they made their life-altering and body-disfiguring decisions.

Parents will sob uncontrollably as they recount how, desperate to help a vulnerable child, they felt railroaded into agreeing and shamed if they questioned the concept of “gender-affirming care.”  They’ll recall with outrage how doctors withheld from them important information about the potential medical and emotional consequences of what they were recommending and how they touted the shoddiest of studies and withheld better ones.  And all of that while those same doctors took the innocence and gullibility of kids and the anguish of parents straight to the bank.

Is that a scenario to make a plaintiff’s lawyer’s mouth water?  Oh yes.

Which brings us to the latest out of Great Britain.  There, following over 13 years of whistleblowing by staff, the Gender Identity Development Service (GIDS) of the Tavistock and Portman National Health Service Foundation Trust has been closed.  That was due to practices that, in any other aspect of medicine, would never have been considered, much less used.  Those practices included drug interventions on young people without the most basic scientific knowledge either about the conditions treated or the long-term consequences for the patient.  Put simply, medical science doesn’t know enough about the physiology or psychology of puberty or puberty blockers or the long-range effects of the latter, to responsibly do what’s being done to thousands of children throughout the country.  Plus, significant information strongly suggests multiple adverse sequelae to the use of puberty blockers that other medical practice would avoid.  Add to that the fact that some 60% – 90% of those who transition seek re-transitioning at a later time and the current picture of trans medicine is one that’s ripe for another type of intervention – legal.

Eventually, the NHS appointed Dr. Hillary Cass to investigate Tavistock.  Her report is so damning that it resulted in the shuttering of the GIDS.

We do not fully understand the role of adolescent sex hormones in driving the development of both sexuality and gender identity through the early teen years, so by extension we cannot be sure about the impact of stopping these hormone surges on psychosexual and gender maturation…

A further concern is that adolescent sex hormone surges may trigger the opening of a critical period for experience-dependent rewiring of neural circuits underlying executive function (i.e. maturation of the part of the brain concerned with planning, decision making and judgment). If this is the case, brain maturation may be temporarily or permanently disrupted by puberty blockers, which could have significant impact on the ability to make complex risk-laden decisions, as well as possible longer-term neuropsychological consequences.

This 2020 paper authored by 24 international experts in the fields of neurobiology, neuroendocrinology, gender development and the like sounded a similar alarm.

The pubertal and adolescent period is associated with profound neurodevelopment, including trajectories of increasing capacities for abstraction and logical thinking, integrative thinking, and social thinking and competence … The combination of animal neurobehavioral research and human behavior studies supports the notion that puberty may be a sensitive period for brain organization: that is, a limited phase when developing neural connections are uniquely shaped by hormonal and experiential factors, with potentially lifelong consequences for cognitive and emotional health.

Those, plus serious concerns about bone density development, cast a dark shadow over the field of trans medicine, a shadow of which every practitioner is well aware.  Imagine being a doctor, knowing the above and yet continuing to give puberty blockers to impressionable and confused kids!  But reports from parents and patients suggest that those practitioners rarely gave a balanced view of the current state of medical science on puberty blockers.

Moreover, Tavistock seems to have made no effort to acquire the data that could be used to develop the state of the science on the very medical practice in which it was involved.

Needless to say, all those kids constitute a gold mine of data on the physiological and psychological results of trans interventions.  A responsible organization would early on have developed protocols to follow those people over many years and thereby assembled a huge longitudinal database of information on the objective and subjective results of those interventions.  And yet, according to former Tavistock nurse Sue Evans, nothing of the sort was ever done.

Our data was poor; it wasn’t being stored properly; and there were not sufficient follow-ups with patients once they left the service—meaning we didn’t know how our patients were faring unless they voluntarily wrote to us.

The facts that (a) Tavistock had at its fingertips some 20,000 individuals who could have been required as a condition of treatment to take part in rigorous follow up interviews and physical exams for the purpose of gathering data on the short and long-term consequences of puberty blockers and (b) that it made no effort to do so, look very much like intentionally turning a blind eye.  It’s as if they didn’t want to know, so they shielded themselves from the truth, truth that, over the years could have conferred immense benefits on their patients as well as those throughout the world.

All in all, it’s as if the trans medical community is just begging to be sued.

And sure enough, here’s the latest from the Times of London:

The Tavistock gender clinic is facing mass legal action from youngsters who claim they were rushed into taking life-altering puberty blockers.

Lawyers expect about 1,000 families to join a medical negligence lawsuit alleging vulnerable children have been misdiagnosed and placed on a damaging medical pathway.

They are accusing the gender identity development service [GIDS] at the Tavistock and Portman NHS Trust of multiple failures in its duty of care.

This includes allegations it recklessly prescribed puberty blockers with harmful side effects and adopted an “unquestioning, affirmative approach” to children identifying as transgender.

If that’s happening in England, imagine what’s to come in the U.S. whose tort system is far friendlier to plaintiffs than is the one across the pond.

Expect their assault on trans clinics and doctors to get under way in the not-too-distant future.  From my perspective, it can’t come soon enough. 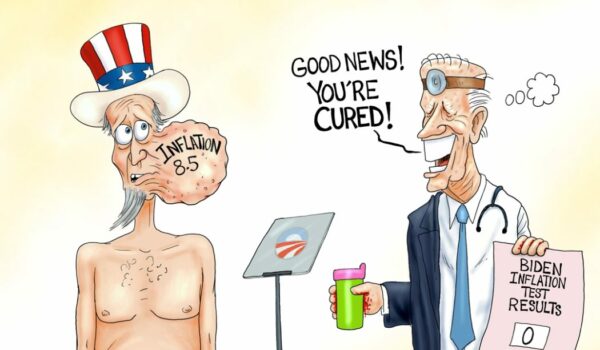 Cartoon of the Day: Doctor’s Orders
Next Post
Grocery prices rise fastest since 1979