Many Walmart shoppers who moved to more local budget options like dollar stores or Aldi when gas prices surged have not returned to Walmart, Reuters reported Thursday.

Foot traffic fell an average of 2.7% at U.S. Walmart locations, which include 3,573 Supercenters and 370 discount stores, compared to the same time last year, according to Reuters. Competing discount grocer Aldi saw foot traffic rise 11.5%, while Dollar General saw a 4.1% increase in foot traffic, as their convenient locations made them preferable for consumers looking to save money on gas, Reuters reported. (RELATED: Here’s One Business That’s Thriving As Inflation Soars Under Biden — Dollar Stores)

McMillon told Reuters that low-income shoppers were buying fewer items despite the fact that they were consolidating trips over higher prices. Dollar General, on the other hand, has widened its product selection to reflect an increase in sales from its core demographic of families making $40,000 or less per year, CNN Business reported.

Walmart has been struggling in recent months with falling profits that led to the layoff of approximately 200 corporate workers last week, The Wall Street Journal reported. Part of this struggle was tied to inventory snafus, with products that were delayed and in high demand during the pandemic no longer seeing customer interest, leading to oversupply, according to the WSJ.

The layoffs were part of a restructuring effort of Walmart’s corporate roles, the WSJ reported, citing people familiar.

Walmart is not alone in the recent decline, with Target also seeing a decline in shoppers, Reuters reported. While Walmart and Target may offer larger selections, dollar stores are often more convenient and closer to consumers, leading consumers to prefer them when gas prices are high, Jason Benowitz, a senior portfolio manager at the Roosevelt Investment Group, told Reuters.

Discount stores saw foot traffic increase 8% year-over-year in the second quarter of 2022, and were up 13.2% compared to the first quarter.

Walmart did not immediately respond to a Daily Caller News Foundation request for comment. 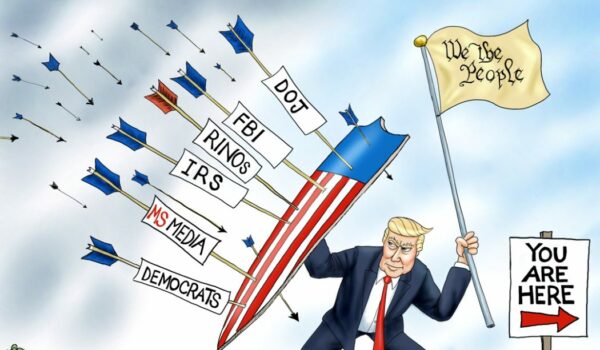 Cartoon of the Day: In the Way
Next Post
A Few Questions for the Woke