Since the George Floyd riots in 2020, homicides have skyrocketed in the United States, and black people have been harmed most, with murders rising more among blacks than any other group. A majority of murders involve black victims, usually killed by other black people — a majority of homicide offenders in 2020 were black, according to the Bureau of Justice Statistics.

The number of Black murders was also far higher than White murders in 2020. The FBI data shows there 7,043 White people murdered that year, meaning 2,898 more Black people were killed compared to Whites….The figures are more staggering considering White Americans make up 76% of the population compared to Black Americans representing only 13%, according to Census data.

The Washington Post reports that “Black women who once hated guns are embracing them as crime soars”:

Like many Black women in [the D.C. area] …, [Patrice Parker had] viewed guns for most of her life as the root of the violence that had wrecked countless lives in her community.

That changed, paradoxically, after her son was shot to death in a parking lot not far from her home. Exasperated with the police response and in despair over the sheer number of weapons on the streets, Parker decided there was only one way to protect what remained of her family. And that was to pick up a gun herself.

“I always felt like you needed to take the guns off the street. But the way things are now …. I don’t feel safe anymore,” she said. “You can’t trust nobody.”

Across America, Black women are taking up arms in unprecedented numbers…. Scarred—sometimes literally—by the firsthand consequences of gun violence and disenchanted with decades of urban gun-control policies that they regard as largely ineffective, some Black women in D.C. and other cities are embracing a view long espoused by Second Amendment activists: that only guns will make them safer….

As a child growing up in Southeast Washington during that era, Keeon Johnson learned to fear the weapons that routinely ended the lives of her neighbors.

“I wasn’t into guns at all,” Johnson said, “because we were told that guns were bad.”

Decades later, serving as the Democratic chairwoman of an Advisory Neighborhood Commission in Ward 8, Johnson began to wonder whether her faith in her party’s repeated promises of stricter gun control was misplaced…. [Eventually, s]he and her husband, Frenchie Johnson, … became NRA-certified instructors last year. Now they teach classes, catering specifically to Black people from D.C. and Prince George’s, out of their home in White Plains, Md….

One of their first students was Janae Hammett, 37, who had gone to elementary school with Johnson in D.C. and whose children’s father was shot to death in 2010. Given that history, Hammett said she was initially “on eggshells” around guns. But her comfort level increased the more she shot, and eventually she joined Johnson in forming the Second Amendment Sista Society, a club for Black women in the Washington region who are interested in guns.

Hammett said her transformation was driven, fundamentally, by desperation. Illegal guns, it seemed, were everywhere. If she couldn’t count on anyone else to protect her, why shouldn’t she legally own a gun to protect herself?

“I don’t think the government, police or anybody will ever get a hold of the illegal guns,” she said….

As a woman in a dangerous place, she had always feared she would be unable to defend her family. Her son’s killers were still out there. But with a gun, Parker felt less vulnerable, especially with the knowledge she had gained at the Choppa Community [a local gun range].

“They took the fear out of me,” she said.

Parker was waiting for the paperwork to come through on her concealed-carry license, and in the meantime she was trying to share her revelation with others….

Some criminology professors, like Gary Kleck, have said that gun possession makes gun owners safer. A household gun can conceivably end up causing an accident or being used in a suicide. But if you live in a high-crime neighborhood, or work in a high-crime occupation (like working in a liquor store or jewelry store), a gun can protect you against being robbed or killed.

The Clinical Steps To Grooming Kids Match Exactly What They’re Being Taught In Schools
Next Post
Cartoon of the Day: Left Hook 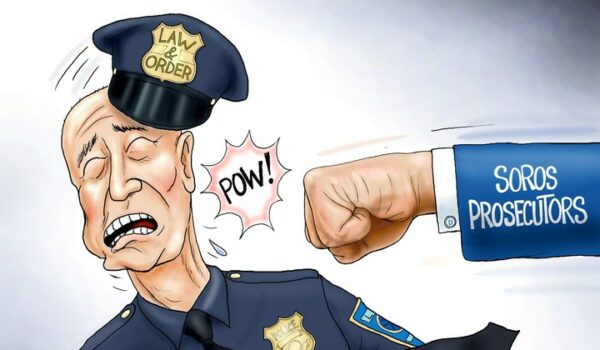