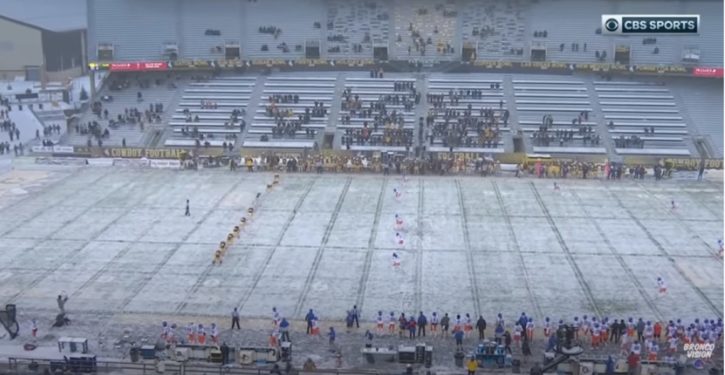 Wyoming prepares to kick off to Boise State in a hard-fought game in the snow on 12 Dec 2020. BSU won 17-9. CBS Sports video, YouTube

Accreditation agencies are messing up colleges by pressuring them to adopt “equity” and “diversity” mandates that prefer some races over others. As Anna Miller of the Idaho Freedom Foundation explains:

Accreditors are responsible for providing an honest assessment on the quality of institutions of higher education, and their stamp of approval is tied to federal and state funds — no green light, no money from the government.

Today, most of these associations now require diversity, equity and inclusion policies and programs as a requirement for accreditation, and college and university administrators gleefully justify their DEI programs because they say accreditation demands it.

The problem has finally started to receive the vital attention it deserves — Florida Republican Gov. Ron DeSantis in April signed a bill that, among other things, implemented an effort to end what the governor called an “accreditation monopoly.”

“I don’t even know where they come from, they are basically self-anointed,” the governor said of accreditation institutions at a bill-signing ceremony. “They have an inordinate amount of power to shape what is going on at these universities.”

…regional accreditation institutions are membership organizations that universities pay dues to for oversight and approval.

In effect, state legislatures and boards of education have surrendered higher education oversight — including setting priorities and curriculum standards — to accreditors.

Universities want to be accredited because the federal government has restricted eligibility for federal money to accredited schools. Without accreditation, students are not eligible to receive federal financial aid.

Consider my state of Idaho. The Gem State’s colleges and universities are accredited by the Northwest Commission on Colleges and Universities. The NWCCU is committed to “promoting diversity, equity, inclusion, belonging, and social justice within the organization and among member institutions.”

Its website states that it is particularly concerned with making institutions of higher education “race-conscious.” Equity, according to the commission, by definition requires race-conscious policies and practices. This goal is enforced by NWCCU’s standards wherein closing equity gaps is the core of the accreditation review process.

Accreditors argue for establishing race-conscious student admissions and giving faculty and students antiracist training, including training white teachers to recognize they are “part of the problem of racial equity.” They recommend infusing curriculum and instruction with DEI. Even mathematics and other STEM fields must become “equity minded.”

Consider the University of Idaho, which established a Council on Diversity and Inclusion that has initiated a well-developed diversity plan that requires the creation of “strategic hiring initiatives that target women and underrepresented and diverse groups in all units.” A chief diversity officer, earning a salary of $141,586, is dedicated to carrying out those goals.

UI has also hired a diversity director for its college of engineering and started a Black Cultural Center to provide “a safe space for black students” and increase black student enrollment.

A report presented to the Joint Finance Appropriations Committee by the University of Idaho’s President Scott Green defended the spending by highlighting the risk of losing accreditation and federal money if the university failed to meet NWCCU’s diversity, equity and inclusion standards.

More at this link: https://www.thecollegefix.com/the-higher-education-dei-takeover-will-not-end-until-this-one-major-problem-is-fixed/

In requiring that schools remedy “equity gaps” through “race-conscious” actions, the accreditors seem to be prodding them to violate the Constitution. Ordering schools to have classroom quotas, racially balanced classes, or equal school-discipline rates violates a federal appeals court ruling, People Who Care v. Rockford Board of Education, 111 F.3d 528, 537-38 (7th Cir. 1998).

Institutions pressured by accreditors to use race have standing to sue for racial discrimination over those quota mandates, under the logic of a federal appeals court ruling, Lutheran Church-Missouri Synod v. FCC, 141 F.3d 344 (D.C. Cir. 1998).

That court decision ruled that the Lutheran Church had standing to sue the FCC for pressuring it to take race into account in hiring employees for its radio stations in order to satisfy a “diversity” mandate. 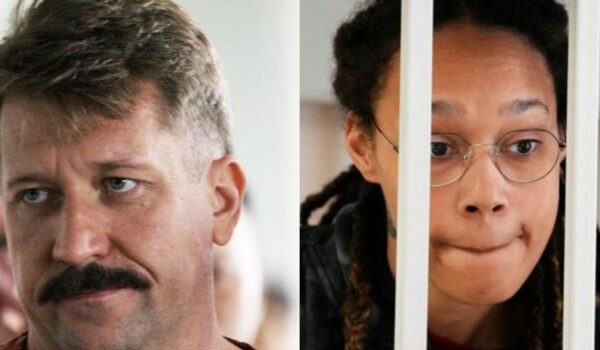 White House Offered To Trade ‘Merchant Of Death’ For WNBA Player
Next Post
What to teach our children about Jan. 6