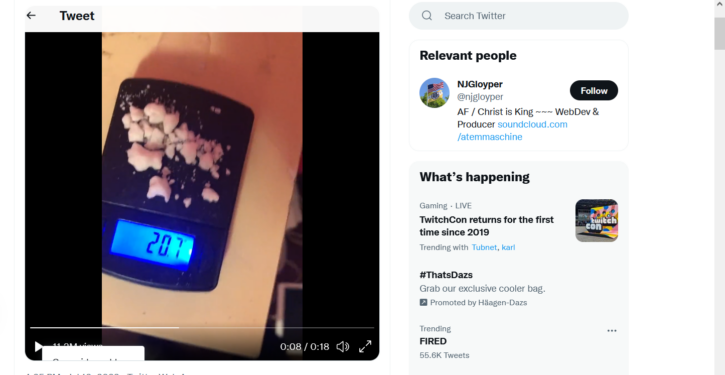 Hunter Biden showing prostitute how much crack he has.

Video of Hunter Biden arguing with a hooker about how much crack cocaine he has is found at this link. And at this link: https://twitter.com/bennyjohnson/status/1546267015303815170

Joe Biden himself may have paid for the encounter. For example, “President Joe Biden apparently unwittingly financed his son’s participation in an escort ring tied to Russia,” reports the Washington Examiner. That’s what “records from a copy of Hunter Biden’s abandoned laptop show.”

Documents on the laptop show that “Hunter Biden spent over $30,000 on escorts, many of whom were linked to ‘.ru’ Russian email addresses and worked with an ‘exclusive model agency’ called UberGFE during a 3 1/2 month period between November 2018 and March 2019.”

He was able to do this due “to Joe Biden committing to wiring him a total of $100,000 to help pay his bills from December 2018 through January 2019.” For example, “Joe Biden wired his son $5,000 while he was actively engaged with an UberGFE escort.”

The Examiner has text messages between Hunter Biden and “Eva,” his primary point of contact for the Russian-linked escort agency UberGFE.

Hunter Biden asked Eva to send one of her escorts to his cottage during the pre-dawn hours of January 18, 2019. A few hours after the escort arrived, he texted Eva again to inquire how much it would cost for another 8 hours of the escort’s time.

Eva replied that the total charge for 16 hours would be $9,500. At 5:17 p.m. that day, Eva told Hunter to wire the funds to a bank account of a woman with a Russian email address.

Less than two hours later, at 6:31 p.m., Hunter was sent an email informing him that “Joseph R Biden Jr.” had electronically sent him $5,000 through Cash App. Joe Biden’s assistant Richard Ruffner sent Hunter Biden a text message that same minute telling him he “was only able to do $5000 because the weekly limit is $7,500.”

Hunter Biden told Eva that his accounts were temporarily frozen at one point because his efforts to pay her “girls” with Russian email accounts were a big “red flag” for his bank. Eva calls Hunter Biden “Robert”, which is his birth name.

Former Justice Department prosecutor Andrew McCarthy told the Washington Examiner: “We can all sympathize with Biden’s love for his troubled son while recognizing that he was shoveling prodigious sums of money to Hunter Biden when the neon lights were flashing that Hunter was compromised and using the money to become ever more compromised — and with Russia, of all places.”

In a 2020 Senate report, Senators Charles Grassley (R-Iowa) and Ron Johnson (R-Wisconsin) noted that “Hunter Biden paid nonresident women who were nationals of Russia or other Eastern European countries,” including transactions with an apparent “Eastern European prostitution or human trafficking ring.”

The Senators concluded that Hunter Biden “sent thousands of dollars” to individuals involved in “possible human trafficking” or “prostitution.” Several of the women “subsequently wired funds they have received from Hunter Biden to individuals located in Russia and Ukraine.”

In 2019, Senators Grassley and Johnson wrote to the Treasury Department’s Financial Crimes Enforcement Network seeking “all Suspicious Activity Reports” for Hunter Biden and his enterprises.

Earlier, we wrote about how Joe Biden’s daughter spoke of being sexualized at a young age, and taking “inappropriate” showers with Joe Biden, in her diary. Now, there is additional confirmation of this story by the London Daily Mail.

The Daily Mail reports that the Florida woman who found Ashley Biden’s diary in a “halfway house” is now under FBI investigation for selling the diary in which the President’s daughter described “showers w/ my dad (probably not appropriate)” and being “Hyper-sexualized @ a young age ,” as well as details of her drug and sex additions.  Aimee Harris is being investigated for selling Ashley Biden’s diary after Biden left it behind at a halfway house in Florida. Biden had been living in Palm Beach Florida before moving back to Philadelphia.

As the Daily Mail explains:

‘I remember having sex with friends @ a young age; showers w/ my dad (probably not appropriate),’ she wrote in a January 2019 entry

After a stint in rehab, the president’s daughter, now 41, briefly lived in a Palm Beach home often used by recovering addicts, and left her diary there when she moved back to Philadelphia in June, 2020.

Single mother of two Aimee Harris, 39, also fresh out of rehab, moved in weeks later and found it under the mattress.

Harris allegedly showed the diary at a Republican fundraising event and sold it for $40,000 to right wing organization Project Veritas.

The Times’s 2021 story said that a Biden family representative reported that the diary was stolen in a burglary. But the DailyMail was told that Harris is not being investigated for theft.

“The feds now aren’t saying it was illegal to find the diary,” said an unnamed source close to the investigation. “Nor are they saying Aimee stole anything.”

“But it’s her selling the property of another that could be considered a crime. And the fact Ashley is the president’s daughter kicks it to a different legal level.”

Harris allegedly teamed up with a friend, convicted money-launderer Robert Kurlander, to sell the diary to Project Veritas, known for its undercover sting operations against Democrat politicians and affiliated organizations.

James O’Keefe, head of the undercover investigation group Project Veritas, bought the rights to publish the diary for $40,000.

Here are images from the video of Hunter Biden showing the hooker how much crack cocaine he has: 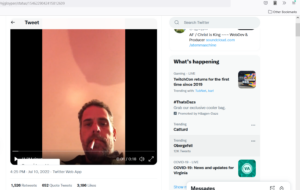 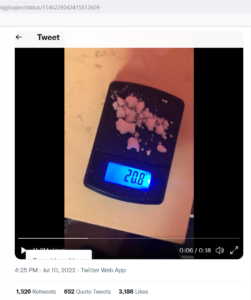 A Quick, Compelling Bible Study Vol. 122: The New Testament’s Most Quoted Psalms
Next Post
The Most Important Things Republicans Can Do To Reform Education