Progressive art colleges are full of contradictions. They promote sexually explicit “art” (some paid for by taxpayers) — even as they punish their students for “sexual harassment” just for displaying sexually-themed art. At a state university, displaying such “art” is presumably protected by the First Amendment. The Supreme Court’s decision in Papish v. University of Missouri Curators (1973) ruled that a student could hand out handbills depicting the rape of the Statute of Liberty, even though it was vulgar and offended other people on campus. But 20 years later, in a more sensitive and litigious age, some colleges began to view sexually-themed art as sexual harassment, especially when the student displaying it is male. In the 1994 edition of People for the American Way’s Artistic Freedom Under Attack, 12% of the arts censorship cases involved sexual harassment accusations.

The Kansas City Art Institute recently expelled a student for sexual harassment for retweeting sexual art, then reversed the suspension after the student obtained legal aid from the Foundation for Individual Rights and Expression (FIRE). From a FIRE news release today:

A student expelled from Kansas City Art Institute for retweeting sexual art won their appeal Tuesday …. KCAI reversed the expulsion decision against student Ash Mikkelsen after a demand from the Foundation for Individual Rights and Expression.

As a private university, KCAI is not bound by the First Amendment’s protections for free speech. But KCAI’s policies, which the college is morally and contractually required to uphold, state that the school “is committed to freedom of expression,” “supports the rights of the campus community to engage in free speech and open assembly,” and values “intellectual and artistic curiosity together with critical and creative inquiry.”

The school first notified Mikkelsen of the investigation into their Twitter account on June 15 and met with Mikkelsen the same day to discuss the investigation. On June 29, Mikkelsen again met with Assistant Dean of Students Joe Timson, who told Mikkelsen that they would be expelled for violating the Student Code of Conduct. Mikkelsen was not given an adequate chance to contest the allegations prior to the university imposing the most severe penalty possible.

KCAI gave Mikkelsen five business days to appeal the finding, which they did on July 6, with the assistance of FIRE Legal Network attorney Ted Green….

Private colleges can be contractually bound by free-speech promises they make in college handbooks and collective bargaining agreements, as the Wisconsin Supreme Court ruled in overturning a private college’s discipline of a conservative professor for criticizing a lesbian graduate student, in McAdams v. Marquette University (2014).

‘Our Country Is Turning Into Afghanistan’: Men In Liberal Cities Scramble For Vasectomies After Roe Overturned
Next Post
Cartoon of the Day: On Vacation 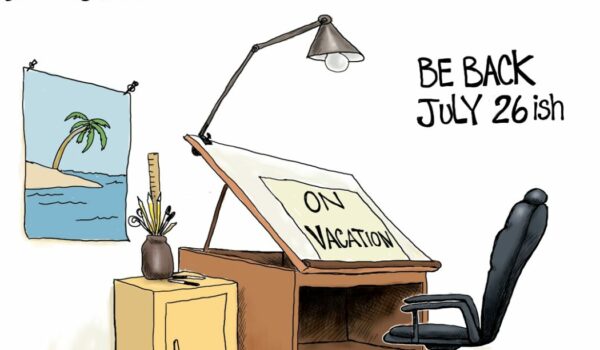