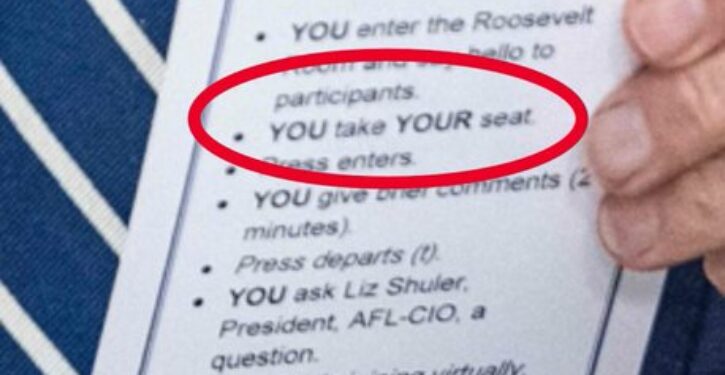 “President Biden on Thursday inadvertently held up a comically detailed cheat sheet prepared by his staff instructing the gaffe-prone leader of the free world to ‘take YOUR seat’ and to limit his remarks to ‘2 minutes,'” reports the New York Post.

A photographer snapped an image of the document when Biden held it up backward at a meeting with wind industry executives, which he attended after skipping his administration’s morning meeting with oil companies about combating record gas prices.

Then, the paper says, “YOU take YOUR seat.”

The typed-up note says that after reporters arrive, “YOU give brief comments (2 minutes).”

When reporters depart, “YOU ask Liz Shuler, President, AFL-CIO, a question” and then “YOU thank participants” and “YOU depart.”

Biden’s use of staff notes at events has been embarrassing before, such as last July, when an aide scrawled, “Sir, there is something on your chin.” Biden also held that note so it faced reporters and photographers.

Biden has privately taken umbrage at staff attempting to do damage control over his unexpected public statements, to the degree that staff even contradict his prior statements without checking with him.

Biden reminded staffers that he, not they, is president, after administration officials told the press that Biden didn’t mean what he said three months ago when he called for Russia’s President Putin to be removed from power.

“The so-called clean-up campaign, he has told advisers, undermines him and smothers the authenticity that fueled his rise. Worse, it feeds a Republican talking point that he’s not fully in command,” according to NBC News. 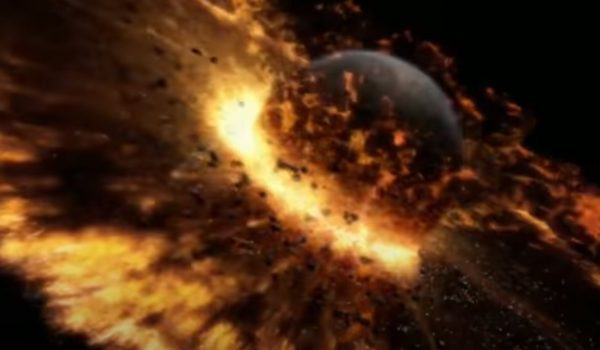