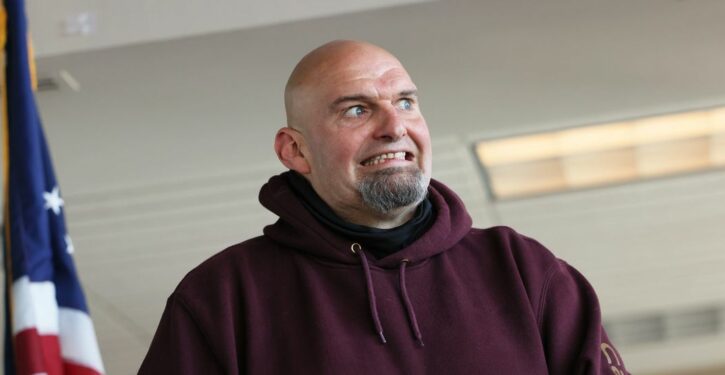 Pennsylvania Lieutenant Governor John Fetterman, the Democratic Senate candidate facing Republican Mehmet Oz, has a history of using his office to recommend the governor pardon convicted murderers and has backed the idea of reducing the state’s prison population in mass, records show.

Fetterman, who has been Pennsylvania’s lieutenant governor since 2019, has been characterized by Republicans as a “socialist” aligned with fringe left-wing members of Congress, like Independent Vermont Sen. Bernie Sanders. While in power, Fetterman seemingly endorsed policies favoring the mass release of prison inmates and said he is “trying to get as many folks out as we can.” (RELATED: Fetterman Posts Near Double-Digit Lead Over Oz Despite Medical Issues: POLL)

“A record will quite literally follow you through the rest of your life costing you better job opportunities, better housing opportunities, better employment opportunities and all kinds of other things that really aren’t fair in my opinion quite frankly,” said Fetterman during a virtual “Power of a Pardon” event in November 2021. “So, I’m proud to say that through our leadership we’ve conferred more pardons in Pennsylvania than any administration in history.”

The state’s lieutenant governor is responsible for overseeing the board of pardons, a five-member body that recommends criminal pardons to he governor, according to Pennsylvania’s government website. Fetterman, who notably pulled a shotgun on an unarmed black man in 2013 and defended it, The Daily Caller reported, appeared to endorse the idea of releasing one-third of the state’s prison population in 2020 twice.

While “criminal justice reform” is vital in terms of re-examining the cases of nonviolent offenders in the 1990s stemming from former Democratic Delaware Sen. Joe Biden’s “tough on crime law,” Fetterman takes it a bridge too far, said Nick Gerace, president of the Protect Our Police political action committee.

“He’s the guy who will be the first one screaming and hollering that something needs to be done,” Gerace, a former Philadelphia police officer, told The Daily Caller News Foundation. “He’s a danger to Pennsylvania. We need to look at criminal justice change but you can’t let violent offenders back on the streets.”

Pennsylvania has seen a spike in pardons and commutations of life sentences under Fetterman’s tenure, The Philadelphia Inquirer reported in May. The board of pardons has recommended 46 commutations in the four years he ran it, whereas there were six during Democratic Gov. Tom Wolf’s first term in office.

Fetterman and one other board member have voted for the most commutations in the past four years than any other board member, the Inquirer reported. Recommendations for pardons have surged 55% since Fetterman assumed his position, the outlet reported, and 155% since former Republican Gov. Tom Corbett’s term.

One person Fetterman motioned for a reconsideration of his pardon bid is Daniel Cummings, who was serving a life sentence for first-degree murder, according to state records and a court filing. Cummings was granted a reconsideration bid in February 2020 and the governor pardoned him one year later.

In February 2021, the same month Fetterman launched his Senate bid, the governor commuted brothers Lee and Dennis Horton, who were serving life sentences in connection with a 1993 robbery and fatal shooting. Fetterman demanded clemency for the brothers eight months earlier and threatened state Attorney General Josh Shapiro that he would run against him in the 2022 gubernatorial race if there were not more commutation recommendations, sources familiar with the matter told the Inquirer.

Fetterman also recommended a commutation for Richard Marra, state records show. Marra was denied freedom in 2018 and then twice in 2020 and is serving a life sentence for first-degree murder, according to a court filing.

“PA’s Correction Secretary has said: ‘We could reduce our prison population by 1/3 and not make anyone less safe.’” tweeted Fetterman in May 2020. “2/3 of those condemned to die in PA’s prison are African American. We have the power to rectify this now + we absolutely must.”

PA’s Correction Secretary has said: “We could reduce our prison population by 1/3 and not make anyone less safe.”

👉 2/3 of those condemned to die in PA’s prison are African American.

We have the power to rectify this now + we absolutely must.

Fetterman also echoed the sentiment in July 2020 that Pennsylvania could direct “savings into” schools upon letting one-third “of our inmates” free, while supposedly not making “anyone less free.”

Fetterman’s 2022 senate run comes one year after Philadelphia, the largest city in Pennsylvania, recorded its deadliest year on record. There were 561 homicides in 2021, Axios reported, and 41 kids under the age of 18 were killed.

Fetterman has supported Krasner, however, and endorsed him in May 2021. Jason Johnson, president of the Law Enforcement Defense Fund, told TheDCNF that if Fetterman’s “idea of criminal justice reform is anything like” Krasner’s, “voters need to look the other way.”

“Prosecutors like Larry Krasner have completely upended the role of prosecutors’ offices, making them function more like public defenders or special interest groups that intervene on behalf of criminal defendants rather than representing the state and holding people accountable who have committed crimes,” said Johnson, whose group compiled a report in June on how Soros spent $40 million getting left-wing prosecutors elected nationwide.

A spokeswoman for the Oz campaign told TheDCNF that Fetterman will “endanger thousands of innocent lives with his soft-on-crime agenda” and “make our communities and cities less safe” due to his desire “to release convicted felons back into our communities, defund the police, and lower the minimum sentence of some convicted murderers.”

Krasner’s office did not respond to TheDCNF’s request for comment.