A recent study by the Center for the Study of Partisanship and Ideology (CSPI) found that the number of young people who identify as LGBT has skyrocketed over the last five years.

While the sexual identification of older generations remained static, the percentage of Millennials, Americans born between 1981 and 1996, who identified as LGBT increased from a little over five percent in 2012 to 10.5% in 2021. The percent of Americans in Generation Z, born between 1997 and 2012, who also claimed to be LGBT soared from an already suspiciously high 10.5% in 2017 to an unfathomable 20.8% — one out of five — in 2021.

However, the study critically found that this rapid growth in LGBT identification is caused by people who are exclusively heterosexual in practice. In the 1990s, 96% of Americans under 30 reported that they exclusively had heterosexual partners. By 2021, that had dipped to 92%. That’s a significant increase, but it doesn’t jive with the reported astronomic growth in the young LGBT population over the last half-decade.

This glaring disparity between self-professed identification and actual behavior among young people exists because they’re obsessed with social media, want the praise that comes with being a sexual minority, and have very little self-worth outside of that. And we’re changing fundamental principles about our society to appease them.

The explosion in LGBT identification isn’t surprising at all to people who even casually peruse social media, especially TikTok, where there are seemingly endless videos of young people describing gender identities and sexual preferences that are more and more detached from reality.

LibsofTikTok has thoroughly documented how ubiquitous radical gender ideology is on social media and among young people. Videos from LGBT creators regularly get hundreds of thousands if not millions of views. TikTok has about 80 million users in the United States — almost a third of the entire population. Almost two-thirds of TikTok users are under the age of 30, and 63% of Americans between 12 and 17 used the app on at least a weekly basis, according to CNBC.

Common Sense Media found that 81% of people from 13 to 17 use social media and almost 70% use it multiple times a day, according to CBS News. Teens spend an average of seven hours a day in front of a screen, according to CNN.

People who post LGBT-related content get tens of thousands of likes and thousands of comments, reinforcing their decision to identify as such.

Not only do they receive kudos from their peers but they also have praise heaped on them from politicians, the mainstream media, academia, celebrities and massive corporations. It has never been more socially acceptable, or celebrated, to be LGBT.

Kids who become drag queens get invited on the “Today” show, and biological men are hailed as heroes for identifying as female and then blowing their competition out of the water in women’s sports.

You don’t get praise for being a good student and often not even for being a good, but not outstanding, athlete. But if you decide to change your gender or claim a new sexual preference other than straight, you are bombarded with praise from some adults who mean well, others who have a political agenda and the vast majority who just go along to get along.

This new wave of sexual and gender liberation hasn’t made young people any happier. In fact, the data is pretty conclusive — young people are miserable.

The number of people between the ages of six and 17 who had been diagnosed with an anxiety disorder surged by 20% between 2007 and 2012, according to The National Survey of Children’s Health. Around 44% of high school students reported feeling persistent sadness or loneliness, the CSPI study found.

Seventy-five percent of high school students who identify as LGBT said they felt persistent sadness and loneliness, according to CSPI.

A lot of this misery can be traced back to social media use, so much so that several state attorneys general have launched a probe to determine just how much damage TikTok has caused to kids. Multiple studies have concluded that protracted social media use increases the chances of depression and poor mental health in young adults. And the release of the first smart phones in the mid-2000’s and the proliferation of social media in the early 2010s heavily correlates with the uptick in suicide and depression among young people.

They see people jet-setting across the globe on private jets and yachts, happy families with no hint of interpersonal drama and large groups of friends engaging in activities many kids haven’t been able to participate in for years because of pandemic lockdowns. All those problems we know for a fact are plaguing young people are hidden behind an electronic veil. All young people see on social media is the good times, which makes them feel even more isolated.

It’s almost the exact opposite for politics on social media. The constant prophecies of doom and the totalitarian rhetoric of us vs. them pushes young people into corners where they become even more isolated from their peers and real life.

Then they see other young people gushing about how great it is to be transgender or some obscure gender identity, in addition to all of the societal praise they get, it becomes cool. They want to emulate their favorite TikTok or Instagram influencer, and the support they receive from the left draws them even further into the lifestyle.

Comedian Bill Maher, who is by no means a conservative, got it spot on during a recent segment of his show.

“If we can’t admit that in certain enclaves there is some level of trendiness to the idea of being anything other than straight, then this is not a serious, science-based discussion. It’s a blow being struck in the culture wars using children as cannon fodder.”

They are sold the idea that the answer to all of their mental and social problems is to change their identity, but more often than not it only makes them worse.

Instead of pushing back on this trend and trying to provide meaning and hope for young people, adults are intent on indulging their whims to the point of changing our understanding of basic biology.

Doctors prescribe puberty blockers for kids, and teens go through irreversible surgeries even though many later regret their decision. Politicians, journalists and activists pretend that a biological male is no different from a woman as trans athletes dominate women’s sports. Schools are replacing fact-based scientific knowledge about sex and pushing radical gender ideology on kids as young as five years old. Libraries are filled with sexually explicit books on gender and sexuality that border on pornography. Parents encourage their own children to dress in provocative outfits and perform live drag shows, sometimes for money, along with adult drag queens.

The short term effects of encouraging this cavalier attitude toward sex and gender — an epidemic of mental health problems in teens and the sexualization of children — are almost too much to bear, but the long term effects may be catastrophic.

Indulging the transitory impulses of young people who are desperate for attention because they’ve been trained that way by social media is no way to run a society that wants to go on living. It will create a citizenry that is chronically depressed, devoid of any higher meaning and cynically dismissive toward basic truths.

Hayden Daniel is the opinion editor at the Daily Caller.

‘Obstructing Justice’: Report Reveals How Many Millions Soros Has Spent Getting Left-Wing Prosecutors Into Office
Next Post
Cartoon of the Day: He Keeps Blowing It 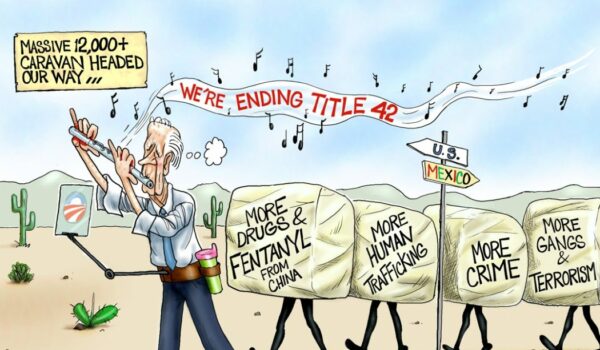