“Prices at the wholesale level accelerated further in April, part of a broader inflation problem persisting through the U.S. economy, the Bureau of Labor Statistics reported Thursday. The producer price index, which tracks how much manufacturers get for products at their initial sale,” rose “11% from a year ago,” reports CNBC. “Those numbers came the day after the BLS reported that consumer prices for goods and services in the marketplace rose 8.3% from a year ago … indicative of the worst inflation the U.S. has seen since the early 1980s.”

“Gas and groceries have been responsible for much of the inflation surge, with indexes tracking the two sectors up a respective 1.7% and 1.5% in April, according to the PPI data. Auto prices, particularly for used vehicles, also have been a major inflation component, and the PPI index for motor vehicles and equipment increased 0.8% on the month.”

This persistently high inflation contradicts Biden’s prediction that price increases would be temporary and his claim that inflation would be “transitory.”

People’s retirement accounts, which usually include investments in the stock market, are shrinking, too. The stock market fell last week for the sixth consecutive week, and is down so far this week.

This reflected a weak economy: the U.S. economy shrank at a rate of 1.4% in the most recent quarter, reflecting a huge rise in America’s trade deficit. American exports decreased by 9.6%, while imports grew by 17.7%. U.S. productivity dropped at a 7.5% annual rate, the most since 1947.

To deal with the high inflation of the Biden era, Senator Majority Leader Charles Schumer (D-NY) suggested a tax increase. But raising taxes would also likely shrink the economy and deepen the coming recession that many economists predict.

The economy is already hampered by Biden Administration policies that discourage work, reward idleness, and make it harder for companies to attract employees. Biden enacted policies that reduced the size of America’s private-sector workforce and made America less economically competitive. 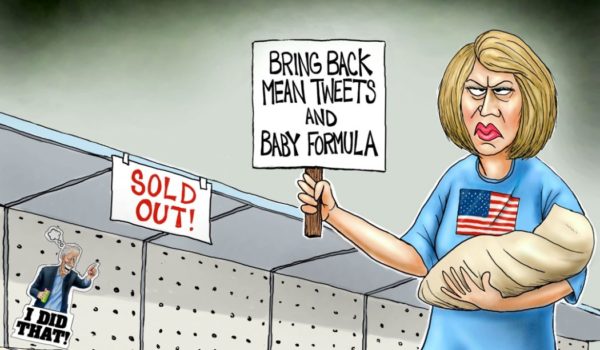 Cartoon of the Day: American Babies First
Next Post
Woman On Train Sprays 70-Year-Old Man With Liquid, Sets Him On Fire