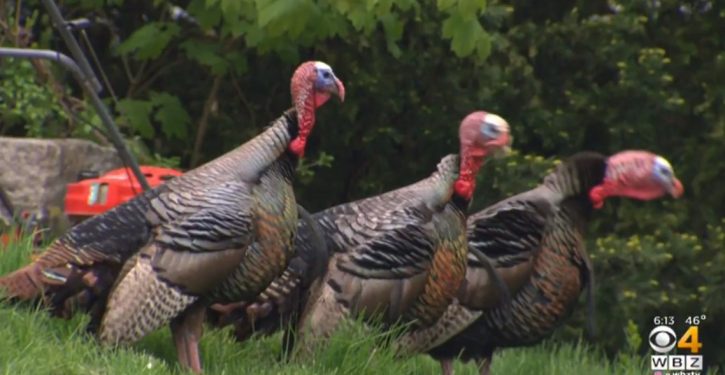 The New York Daily News reports that a “turkey, terrorizing Washington, D.C. residents, has crossed state boundaries into Maryland and is eluding five agencies from as many jurisdictions. Its most frequent haunt is the Anacostia River Walk Trail near the Kenilworth Gardens, just east of the United States National Arboretum and not far from the D.C. border with Maryland.”

“I was attacked there,” local resident Cliff Robinson, 70, told The Wall Street Journal. “Three weeks ago. I was trying to get away from him and he came after me. He wouldn’t let me pass.”

Bicyclists aren’t safe either, as singer DeDe Folarin captured on video. Folarin had earlier been attacked, and witnessed the angry turkey try to attack a cyclist; he helped the cyclist fend off the menacing turkey.

“It was a scary situation,” Folarin told WSLS-TV. “Just riding along the path, this gigantic turkey just jumps up towards my face, almost knocked me off my bike, then proceeded to chase me around for five minutes.”

The Daily News says that

Just the one bird seems to be on the rampage. It has been going on for months, and the ferocious fowl has only gotten more aggressive. The Washington D.C. one, a tom turkey, can inflict considerable damage. They can run 25 miles per hour. It has drawn blood with puncture wounds, and left scratches and bruises. One victim recounted ending up at urgent care with puncture wounds, needing a tetanus shot and antibiotics.