The ruling came in Brooks v. Francis Howell School District. As Judge Stephen Clark observed in the ruling, “both Black Voices Matter and Francis Howell Families are organizations with viewpoints on board actions, and both organizations call for policy changes, but” school officials “only ban references to Francis Howell Families during the patron comment period.” This viewpoint-based enforcement of the no-advertising policy violated the First Amendment, which forbids viewpoint-discrimination in situations like school-board meeting comment periods, because they are limited public forums (as the Supreme Court has made clear in cases such as Rosenberger v. University of Virginia (1995)).

Here is the key passage of Judge Clark’s April 21 decision against the school district:

Through a political action committee, Plaintiffs frequently oppose the actions of their local, elected school board, particularly on issues of curriculum. While speaking during the public-comment portion of board meetings, Plaintiffs mention the PAC—Francis Howell Families—and point the board to the trove of detailed information on the PAC’s website, www.francishowellfamilies.org.

Invoking its no-advertising policy, the board has banned Plaintiffs from mentioning at board meetings “Francis Howell Families” or its website, telling them they “will be immediately stopped,” cutting the microphone while one Plaintiff spoke, and threatening to permanently ban them from speaking at meetings. Insofar as the board allows other organizations, which support the board, freer reign at meetings, Plaintiffs challenge the board’s actions as viewpoint discrimination….

[T]he patron-comment section of school board meetings is a limited public forum, and that the school board may impose reasonable and viewpoint-neutral restrictions on speech during patron comments…. [But t]he “unique scrutiny” Defendants imposed on the Plaintiffs provides evidence of Defendants’ [viewpoint-]discriminatory motive…. Defendants have allowed other individuals to refer to other organizations with views either supporting the board or its favored positions, or opposing Francis Howell Families; and Defendants have allowed other individuals to engage in political campaigning during patron comments, without interruption.

For example, the board permitted an individual to refer to the “Black Voices Matter” organization during the patron-comment section of a board meeting, while the individual was recognizing “positive progress [the] district has taken in equitable and anti-racist actions.” As Plaintiffs point out, both Black Voices Matter and Francis Howell Families are organizations with viewpoints on board actions, and both organizations call for policy changes, but Defendants only ban references to Francis Howell Families during the patron comment period.

As another example, during another board meeting the District communications director read a patron comment the board had received via online submission, identifying the commenter as a “member of MNEA.” According to required public filings, MNEA supports candidates for public office via its own political action committee. However, though several admitted exhibits connect MNEA to the Missouri National Education Association, the parties do not address whether that was the organization the commenter was referring to, and the Court does not make a finding regarding what specific organization the individual was referring to. Regardless of which organization the individual was referring to, this provides another example of an individual identifying himself as a member of an organization other than Francis Howell Families during the patron-comment section of a board meeting, without reprimand or censure.

As a third example, during the patron-comment section of the March 17, 2022 meeting, the board permitted several speakers to directly address not the board but audience members and to urge those listening to vote for certain school board candidates and against candidates associated with Francis Howell Families—only thinly veiling the candidates to which the speakers referred. These speakers overtly implored the audience to vote for their favored candidates—a direct affront to the board’s “no political campaigning” policy—yet the board allowed the speakers to proceed, unabated.

Further, the tone of the board’s after-the-fact email to these speakers stands in contrast to the emails the board sent to the Plaintiffs. The board’s email to the individuals stumping for board candidates stated that their comments “may have been viewed by some as political campaigning” [which is forbidden by another school board policy] and asked the individual to “please keep this in mind next time you address the Board, as I don’t want either of us to be in the position of having to cut off your time.” The board’s email to Plaintiff Rash, on the other hand, warned that “[f]uture violations will result in your microphone being cut off and your time forfeited” and that “[f]uture violations may also result in you no longer being allowed to speak during patron comments.” The Court finds that the draconian language Defendants used to address Plaintiffs, compared to the apologetic language Defendants used in emails to individuals who campaigned against Plaintiffs during patron comments, provides further evidence of viewpoint discrimination.

These actions and statements serve as evidence of viewpoint discrimination….

The Student Loan Repayment Pause Is Completely Lawless
Next Post
Cartoon of the Day: The Tragic Kingdom 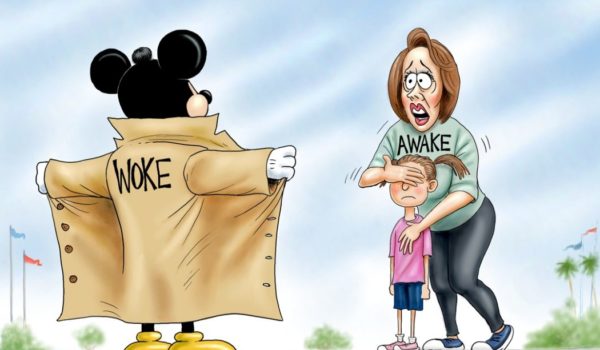