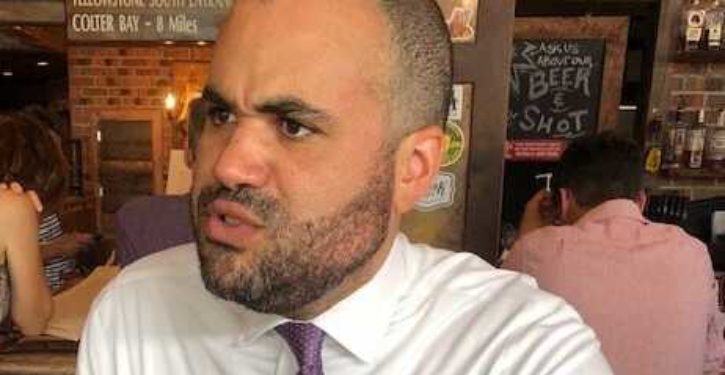 The Director of Race and Equity at the University of California, Los Angeles, accused those who took issue with his argument for abolishing the police of engaging in “white supremacy.” He also depicted whites as violent, claiming that “white people … murder Black people in droves.”

Director of Race and Equity Johnathan Perkins tweeted on Apr. 12 that allocating more money for the police results in more violence.

“Funding police MORE only leads to more violence. This isn’t a debate. They continue to terrorize us. Defund them NOW — enough!!,” he tweeted.

Funding police MORE only leads to more violence. This isn’t a debate. They continue to terrorize us. Defund them NOW — enough‼️

He further criticized Adams’ performance, knocking his “promise to keep NYC safe” by adding “1,000 police officers to the subway patrol.” According to Perkins, adding more police to patrol the subways failed to stop the shooting because “stopping violence isn’t their job.”… tweeting out “POLICE DO. NOT. KEEP YOU SAFE.”…

He further capitalized on the Times report, retelling the alleged uniform failure to support his claim that “police DO NOT keep us safe.” This tweet was sent out before the shooter was apprehended…Perkins argued that “[w]hite people, for example, murder Black people in droves and do not suffer from mental illness.”

White people, for example, murder Black people in droves and do not suffer from mental illness.

Perkins continued his argument to accuse disagreement with his assessment as being a product of white supremacy….”Put more bluntly,” he continued, “you are likely treating whiteness as the presumed default in your thought process- that is white supremacy.”

Whenever you don’t understand something I’ve tweeted, it’s likely there’s some racial element to the issue you are not appreciating. Put more bluntly, you are likely treating whiteness as the presumed default in your thought processes—that is white supremacy.?

Perkins also … [took] issue with being “tough on crime” and called it “nonsense to an abolitionist.”  According to Perkins, abolitionists do not view crime as “something on which to be tough.” Rather, “crime can be modified only via access to basic resources and social services” because the “[m]majority of even violent crime is due to poverty.”

Perkins was wrong to say that whites are murdering “Black people in droves.” As a black attorney noted in the National Review, “blacks aren’t being ‘hunted’ by whites.” Indeed, “‘Between 2012 and 2015, blacks committed 85.5 percent of all black-white interracial violent victimizations.'”

Johnathan Perkins, as director for race and equity at UCLA, previously yearned for the death of black Supreme Court Justice Clarence Thomas in a March 24 tweet. ABC News reports that in a tweet last Thursday, Perkins stated that “No one wants to openly admit [we all] hope Clarence Thomas dies.” “Thomas can choke as far as I’m concerned,” he added. “This whole rule we’re not to wish ill on people is silly,” he said. He ended by calling Thomas’ wife, whom he did not mention by name, “treasonous.”

“Uncle Thomas is a sexist token who’s committed himself to making us all share in he and his treasonous wife’s misery,” Perkins (pictured) concluded his tweet.

Perkins set his Twitter feed to private by Monday, according to Fox News, which reached out to Perkins for comment, but the scholar hung up on the news agency

The Supreme Court said Friday that Justice Thomas had been released from the hospital after having been admitted a week earlier following flu-like symptoms, according to The Wall Street Journal.

“Uncle Thomas” refers to “Uncle Tom,” a derogatory term for a black figure thought to be “submissive and spineless,” according to Britannica.

Uncle Tom, a character in the 1852 antislavery novel “Uncle Tom’s Cabin,” has been criticized by Malcolm X and others for his subservience to his white masters.

UCLA’s Perkins “is a public academic, higher education attorney, lecturer and podcast co-host of black&,” according to his personal website.

“His activism and academic work is rooted in antiracist allyship and the effects of individual and institutional bias.”

Anna Spain Bradley, vice chancellor for Equity, Diversity and Inclusion at UCLA, said in a statement to Townhall.com: “This tweet does not reflect my or UCLA EDI’s views.”

But Perkins is still listed as “Director, Race and Equity,” on UCLA’s web page. It still touts him as a “consultant, writer, and speaker on issues of equity, diversity, and inclusion.”

UCLA’s management might not be willing to publicly admit sharing Perkins’ odious views, but that doesn’t mean its diversity staff doesn’t share them in private. People who work in diversity, equity, and inclusion are often politically extreme.

There is a huge ideological double standard in what college staff can say about judges and the Supreme Court. Conservative scholars have been suspended from academic positions for saying far less offensive things about liberal judges. For example, Georgetown University Law Center suspended a conservative lecturer, Ilya Shapiro, for suggesting that an Indian-American judge was better qualified than President’s Biden’s liberal African-American nominee to fill a Supreme Court vacancy.

Science professor job limited to women, transgender, non-binary or two-spirit folk
Next Post
Biden Broke His Promise To Americans. Will They Throw Him Out?