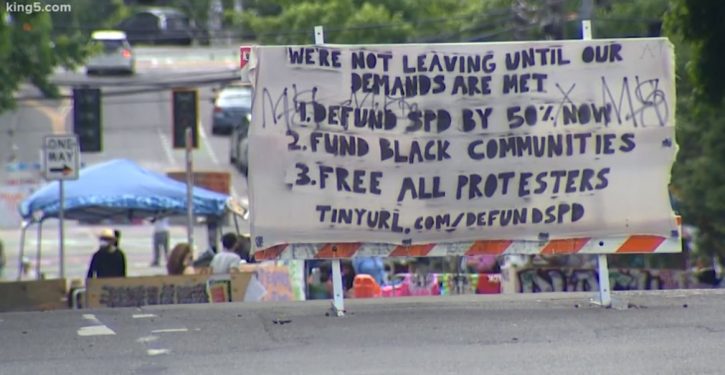 “Every time I get a little down … I just turn on the television or take a look at all the young people,” Biden said at Seward Park, according ABC News. “They are really, really energized–whether it’s basic human rights or it’s the environment.” Seattle’s homeless problem has worsened, spawning homeless camps littered with human waste, drugs and crime, according to the Washington Policy Center.

“Seattle has one of the worst homeless problems of any major city in the United States,” The Washington Policy Center wrote. “Walk down virtually any street in the downtown core or in many neighborhood business districts, or stop at most parks in the metropolitan area and you will find people living in unconventional situations surrounded by trash, human waste, and needles.”

Republican Rep. Cathy McMorris Rodgers slammed Biden’s inability to address surging homelessness and drug issues in a letter obtained by The Center Square Thursday, asking the president to see how failed policies have ruined the city.

“If you do, you will see how homelessness has taken over with tent cities popping up everywhere, serving as ground zero for rampant drug abuse and violent crime; devastating community safety and the ability of small businesses to remain open,” McMorris wrote in The Center Square.

“Since you took office, violent crime has spiked across the country, including by 20% in Seattle and 10% in Spokane,” McMorris wrote. “Just last month, two Washington State law enforcement officers were shot and killed in the line of duty.”

Surging homeless camps throughout the city have caused parents and children to avoid parks where they once enjoyed various outdoor activities, Fox 13 Seattle reported. The parks are now littered with homeless tents bringing violence and drug use.

President Joe Biden is in Seattle to address our prolific crime and homelessness crisis.

But it did force Seattle leaders to clear up some embarrassing encampments near his hotel at least.

“You walk around and shake your head,” Seattle resident Scott Bader said regarding the overrun streets. “It’s just an unfortunate situation the city needs to get on.”