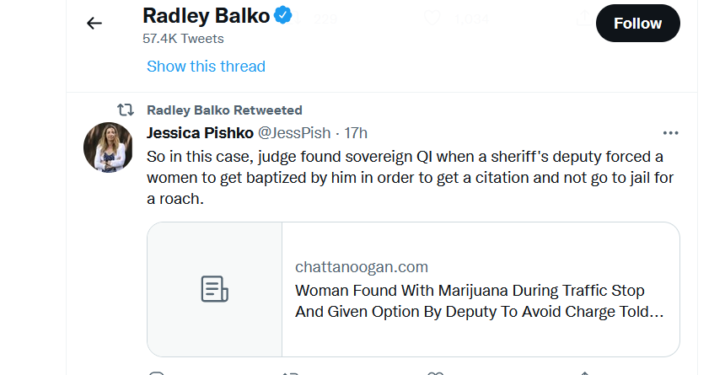 Criminal justice activists — including Washington Post writer Radley Balko — wrongly implied that a woman could be forced into baptism and be denied the ability to sue over it, despite the fact that that would violate her constitutional rights. In fact, a court ruled just the opposite in Riley v. Hamilton County Government, which allowed Sheriff’s deputies to be sued for doing that.

Police cannot abuse people with impunity. Cops can be sued as individuals if they violate clearly-established constitutional rights. And if the police department has a “policy or custom” of violating people’s rights, the police department or city that employs the cop can be sued as well, even if the constitutional right being violated was not “clearly established.” That’s how the Supreme Court has interpreted liability under 42 U.S.C. 1983, the federal law that allows people to sue for money over the “deprivation” of “rights, privileges, or immunities secured by the Constitution and laws.” Every year, many courts rule that cops can be sued individually for things like wrongful arrest, excessive use of force, and Fourth Amendment violations, even when the facts of the case differ from prior lawsuits that were brought in the past.

But “criminal justice reformers” say that cops can’t be sued unless a prior case found a constitutional violation based on “functionally identical facts.” And when a case rejects that claim, and allows a cop to be sued, the “criminal justice reformers” simply ignore such rulings — or, worse, distort a court’s ruling to claim it adopted that extreme stance. A classic example was coverage of the April 7 ruling in Riley v. Hamilton County Government. That case let a woman sue for a violation of constitutional religious-freedom guarantees where she was pressured into being baptized, by being offered the opportunity to avoid jail if she would accept baptism, despite the fact that she had been found with marijuana during a traffic stop.

No prior court had found a violation of the Establishment Clause or Free Exercise Clause based on such facts. But that didn’t matter.  As the Tennessee judge explained, to defeat a claim of qualified immunity, a plaintiff need not show functionally identical or fundamentally similar facts, and the Supreme Court has explicitly made that clear in decisions like Ziglar v. Abbasi and Anderson v. Creighton:

So the judge said the cops could be sued individually for money, rejecting their defense of qualified immunity.

After the court issued this ruling, “criminal justice reformers” claimed the court ruled just the opposite.  For example, Jessica Pishko wrote, “So in this case, judge found sovereign QI [qualified immunity] when a sheriff’s deputy forced a women to get baptized by him in order to get a citation and not go to jail for a roach.” Her tweet was approvingly retweeted by various journalists, such as the Washington Post criminal justice writer Radley Balko (Balko is most famous for making broad-brush claims that the criminal justice system is systematically racist, pointing to the higher black arrest and incarceration rates. In reality, the higher black arrest and incarceration rates are due mostly to the higher black crime rate. The federal Bureau of Justice Statistics found that in homicide crimes, “the offending rates for blacks were more than 7 times higher the rates for whites” between 1976 and 2005. (See BJS, Homicide Trends in the United States).

This claim that the court found qualified immunity — or that immunity applies unless a lawsuit involves facts “functionally identical” to prior lawsuits — is just not true. As the Supreme Court has explained, the fact that no prior lawsuit involved similar facts may just be a sign that the violation was so flagrant, and obvious, that no one had dared violate the Constitution in that particular way. As the Justices explained in United States v. Lanier (1997), the “‘easiest cases don’t even arise. There has never been . . . a section 1983 case accusing welfare officials of selling foster children into slavery; it does not follow that if such a case arose, the officials would be immune from damages [or criminal] liability.'”

But criminal justice reformers constantly make the false claim that qualified immunity applies unless a court has previously found a constitutional violation based on the same facts or virtually identical facts.

The Washington Post’s Balko earlier made false claims about Indiana’s Religious Freedom Restoration Act. Radley Balko posted on Twitter that “when Trump picked Pence, Pence was a very unpopular governor — in large part because he pushed an anti-gay ‘religious freedom’ bill so onerous it turned much of the state against him. Including his own party. In *Indiana.*”

Balko was falsely describing Indiana’s Religious Freedom Restoration Act. It didn’t even mention gays, much less single them out for special burdens. It was hardly “onerous.” It was modeled explicitly on the federal Religious Freedom Restoration Act, which has been on the books since 1993 (although that did not stop keep angry progressives from denouncing it).  As the Washington Examiner pointed out, “The words ‘gay,’ ‘lesbian’ and ‘sexual orientation’ are nowhere to be found in” its “language,” and “no religious freedom bill has been used successfully to defend discrimination against members of the LGBT community in the 22 years since Congress and states began adopting such laws.”

These statutes require the government to justify any “substantial burden” on someone’s religious freedom by showing its action burdening their religion advances a “compelling state interest.” They do not, however, say that religious freedom gives someone the right to do whatever he wants, regardless of the consequences.

Religious-freedom defenses to gay-rights claims tend to fail either because a court finds a “compelling interest” in getting rid of sexual-orientation discrimination, or because the court finds no “substantial burden” on religious freedom to begin with. These religious freedom statutes are pretty useless for business owners facing a discrimination complaint. They are virtually toothless in the gay-rights context. Their toothless nature is why religious people who oppose gay marriage rely on the First Amendment’s freedom of speech, not these state religious-freedom laws, as their primary defense when they are sued for failing for failing to help publicize and promote gay marriage (such as wedding photographers who object to filming a same-sex wedding, or printers who object to printing same-sex wedding invitations, or wedding-cake makers who object to object to sculpting wedding cakes specifically for a gay wedding).

Some people contended that Indiana’s law was somehow unusual in potentially applying religious-freedom as a defense to lawsuits, not just government prosecutions. But it was in fact typical on that score. The federal Religious Freedom Restoration Act on which Indiana’s law was modeled also has been interpreted to protect religious freedom against lawsuits, including lawsuits against businesses. As Washington Post fact-checker Glenn Kessler pointed out in 2015, it had already been interpreted to apply as a defense against lawsuits brought by private persons, by most (but not all) of the appeals courts that have addressed the issue, including “The U.S. Courts of Appeals for the 2nd, 8th, 9th and D.C. Circuits.” On this point, Indiana’s law merely made explicit what was already implicit in the federal law, as legal commentators like Reason’s Jacob Sullum and law professor Josh Blackman explained.

In short, the apocalyptic predictions by progressives about Indiana’s law were baseless. It was not “onerous,” nor did it single out gay people, contrary to Radley Balko’s claim.