The U.S. was busy pumping money into Russia’s economy on the eve of its invasion of Ukraine, reports CNS News:

The United States ran a record February merchandise trade deficit of $2,080,300,000 with Russia…Russia launched its invasion of Ukraine on February 24.

That is the largest trade deficit the United States has ever run with Russia in the month of February. (The Census Bureau has published monthly U.S.-Russia trade numbers going back to 1992, the year after the collapse of the Soviet Union.)….

In 2021, according to the U.S. Energy Information Administration, the United States imported an average of 624,000 barrels per day of Russian crude oil and petroleum products—which set an annual record for U.S. imports of Russian petroleum imports.

when it comes to energy specifically, the Biden administration has pursued a number of policies designed to make it more expensive to produce fossil-fuel energy in an effort to reach a goal of net-zero carbon emissions by 2050. In fact, environmentalists cheered Biden’s bold moves just a week into his presidency as “the most remarkable day in the history of America’s official response to the climate crisis.” As Bill McKibben wrote in The New Yorker, Biden’s actions marked “the official beginning of the end of the fossil-fuel era.”

The president’s measures have included halting new permits for drilling and leases on federal lands, shutting down the planned Keystone XL pipeline, and proposing the end of tax credits for new drilling and exploration projects. He’s been joined by congressional Democrats who have been working to tighten regulations loosened during the Trump years and otherwise clamp down on oil producers. At the state level, ousted Democratic Gov. Andrew Cuomo banned fracking in New York in 2014 and California has effectively stopped the practice in anticipation of a 2024 ban.

And as the Daily Caller notes, Biden’s policies made the U.S. more reliant on Russian oil, reducing supplies from other countries like Canada, and reducing drilling and oil production in the U.S.:

Among Biden’s first actions as president was to revoke the Keystone XL pipeline’s federal permit, which would have transported more crude oil into the U.S. from Canada. The administration also abandoned the Willow Project, a significant oil and gas project in Alaska approved by the Trump administration that would have produced 100,000 barrels of oil per day.

After a federal judge ordered the Biden administration to halt its attempted ban on new federal land drilling leases, the Department of the Interior has dragged its feet and defied multiple court-ordered deadlines to restart the program. The Interior Department also chose not to appeal a recent ruling that prohibited an offshore drilling lease in the Gulf of Mexico the agency facilitated in the fall….

Further, the administration hasn’t developed a new five-year federal leasing program — which is needed to plan future lease sales — to replace the current one which expires in late June 2022, according to a Congressional Research Service report from December. The most recent offshore lease sale occurred in 2020 during the Trump administration.

Overall, there are just 601 oil and gas drilling rigs active in the U.S., the latest government data showed. The number of rigs peaked under the Trump administration in 2018 when there were 1,032 active.

The U.S. is also on track to again become a net importer of oil in 2022 after briefly reaching net exporter status in 2020. The U.S. became a net exporter of total energy in 2019, factoring in oil, coal and natural gas trade, for the first time in 75 years.

“We haven’t had a federal lease sale in North Dakota in over a year,” Republican North Dakota Rep. Kelly Armstrong, a member of the House Energy and Commerce Energy Subcommittee, told the DCNF in an interview….Experts have blamed the high [gas] prices on the administration’s energy and climate policies disincentivizing domestic fossil fuel production. 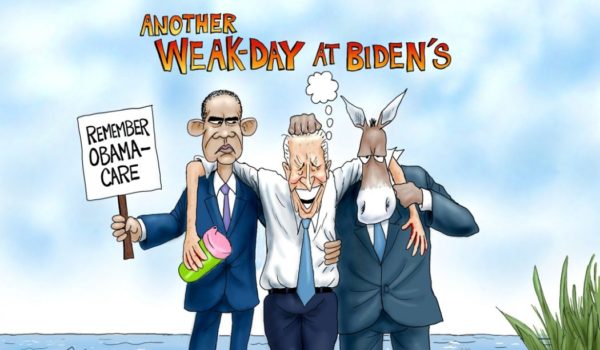