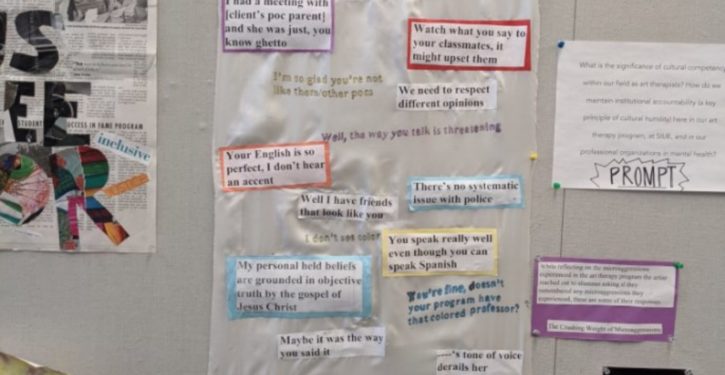 A Southern Illinois University campus has rescinded its no-contact orders against a conservative student who had shared a world view deemed “unwelcome” by other students, reports Campus Reform:

After a Feb. 23 letter from Alliance Defending Freedom (ADF) attorneys threatened legal action, Southern Illinois University Edwardsville (SIUE) recently dropped its “no contact” orders against a graduate student who had shared her religious and political views.

Campus Reform reported on the university’s issuance of three “no contact orders” against SIUE art therapy graduate student Maggie DeJong after several of her classmates characterized her speech as “harassment” and “microaggressions.”

ADF media relations specialist Ellie Wittman told Campus Reform that one of the reasons DeJong was issued these orders was because of a statement she made during a text exchange between DeJong and a fellow student.

“My personal held beliefs are grounded in objective truth by the gospel of Jesus Christ,” DeJong had reportedly said.

An art project titled the “Crushing Weight of Microaggressions” hanging at SIUE included DeJong’s exact quote from the text conversation.

Judge declares California’s racial quotas for corporate boards unconstitutional
Next Post
‘Fasting From Whiteness’: Church Announces It Will Not Use Hymns Written By White People During Lent