In his proposed federal budget, President Biden has included a “Billionaire Minimum Income Tax.” It taxes things that are not income, and applies to thousands of people who are not billionaires. It applies mainly to non-billionaires, including households with a net worth of $100 million or more. And it levies an “income” tax on income that has not yet been received, and may never materialize. Taxing future income today robs future future administrations of tax revenue based on that income, in order to finance the Biden administration’s massive spending binge, which has resulted in America’s national debt reaching unprecedented levels — over $242,000 per taxpayer.

Economist Chris Edwards describes how Biden wants to tax things that are not “income” at all:

As part of its 2023 federal budget … the Biden administration is proposing a new 20 percent minimum tax on households with a net worth more than $100 million. The tax would be calculated with the inclusion of unrealized capital gains as “income.” Let’s say a high‐​tech entrepreneur earns $100 million and currently pays $20 million in federal income tax, or 20 percent. And let’s say her wealth is $2 billion and rises $200 million this year as she grows her company. Apparently, the Biden theory is that her “income” is really $300 million, and she should pay $60 million in tax this year—triple what she currently would pay.

The Biden tax plan is crackers. Unrealized gain is not income. It represents the expectation of future income, which should be taxed in the future under a well‐​designed tax system. Often, expected future income doesn’t materialize and asset values drop. The stock market is down five percent this year, so our entrepreneur may have negative “income” of $100 million….Under Biden’s tax proposal, wealthy people would be rewarded for consumption and penalized for reinvesting to grow their businesses. Patience and prudence would be punished. The Biden plan would particularly harm leading edge industries that rely on wealthy investors to take the large risks that drive American innovation.

Not only are the economics of taxing unrealized gains bad, but the IRS could not handle the administration of a new tax structure based on gyrating asset values. The tax agency has trouble trying to value assets a single time at death under the estate tax. The IRS claimed that Michael Jackson’s estate was worth $481 million, but it was wrong, and after a seven‐​year battle the tax court found that the estate was really only worth $111 million. The IRS may face many such battles every year under the new Biden tax. And remember, the IRS is already overwhelmed trying to administer the current tax code. In the unlikely event that Biden’s billionaire tax is enacted, it would soon be repealed. Biden’s plan is somewhat different, but wealth taxes were repealed nearly everywhere they were tried in Europe due to the economic damage they caused and the costs and complexities of administration.

Biden’s tax may also be unconstitutional, since it is not an income tax (which is permitted by the Sixteenth Amendment), nor does it satisfy the requirements for other federal taxes authorized in Article I of the Constitution, which permits only certain kinds of direct and indirect taxes. Rather, it is a wealth tax. Unlike state governments, the federal government doesn’t have the power to levy a property tax or wealth tax, according to leading constitutional lawyers.

The National Taxpayers Union says the “Constitution is clear: unapportionated direct taxes are unconstitutional.” Biden’s proposed tax is an unapportioned direct tax that violates Article I, because it is not levied “in proportion” to each state’s population, it says.

Biden’s new “income” tax isn’t needed to promote social equality. Treasury Department data reveals that tax rates on millionaires and billionaires are already far higher than for everyone else, including the middle class, and that the bottom 30 percent of families pay virtually nothing in total federal taxes (low-income earners typically pay some security tax, but little or no income tax, and if they file tax returns, they usually get back refundable tax credits worth more than their social security taxes).

Nor is this “income” tax needed to offset low taxes on capital gains: The capital gains tax rate paid by high-income households is about 29.2 percent in America, much higher than the average of 19.1 percent in industrialized countries worldwide (the American rate includes the federal tax rate plus the typical state tax rate).

Back when Biden was less radical, he himself recognized the unfairness of this sort of tax. Reason magazine notes that in December 2019, Biden had “rejected calls by” left-wing senators “to back a wealth tax on the richest Americans.” When critics called those proposals punitive, because they targeted a small group of individuals, Biden told wealthy supporters that while they shouldn’t expect a tax cut from him, there would be “no punishment either.” As Reason observes, “a CNBC reporter asked Biden about arguments—some of which came from experts friendly to Democrats—that the wealth taxes proposed by his rivals would be unworkable and punitive. In response, Biden allowed that ‘parts of the plan, those objections apply.’ He … rejected the idea of a ‘a single tax, on a single group of people.'” 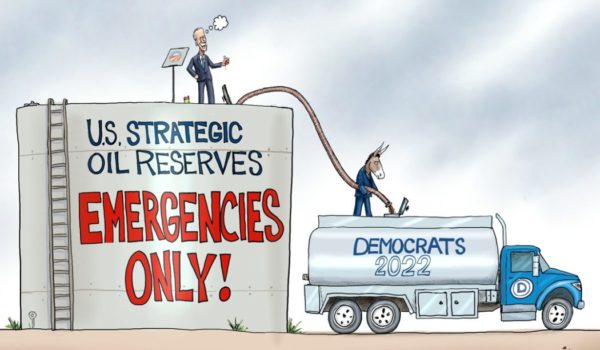 Cartoon of the Day: Running on Empty
Next Post
‘We’re Going To Get Slaughtered’: Biden’s Poll Numbers Trigger Panic Mode For Democrats