The Biden administration will release more oil from the Strategic Petroleum Reserve. It’s a feeble attempt to keep the price of gas from rising more until after this November’s Congressional election. But thanks to Democrats’ past decision to keep Trump from expanding the reserve back when oil was dirt cheap, the amount of oil in the reserve is just too tiny to have much effect on gas prices (and the Biden administration may release only about 8 percent of the reserve). It’s dumb to release the gas now, when there isn’t an emergency, and gas prices probably haven’t peaked.

Despite warnings from many industry analysts who immediately pointed out that such a move would deplete the SPR to dangerously low levels not seen in decades while having almost no direct impact on gas prices, it appears that Joe Biden is ready to do it again. And if the estimates we’re hearing are anywhere close to accurate, this release could be more than three times larger than the one in November. (Does anyone recall gas prices suddenly dropping back to more “normal” levels in November? I don’t.) But be that as it may… here we go again.

As CNBC noted in November, the U.S. had begun releasing 50 million barrels from the Strategic Petroleum Reserve as “crude futures surged to a seven-year high above $85. Prices at the pump” had “followed the ascent, and” were “currently hovering around their highest level in seven years. The national average for a gallon of gas stood at $3.409” in November, “according to AAA, up from $2.11 one year” earlier.

As Ed Morrissey noted last year, a release of this size is as insignificant as

The reserve itself isn’t very big, thanks to the Democrats’ past decision to keep the reserve small. America could have refilled and expanded its Strategic Petroleum Reserve in 2020 when oil was dirt cheap, and then sold the oil later at a time of high prices, for a hefty profit.

In mid-2020, crude oil prices actually briefly went negative, to minus $37 per barrel, due to production exceeding needs and capacity. Oil prices were below $30 per barrel for months. President Trump proposed adding oil to the strategic petroleum reserve when oil cost little or nothing, but Senate Majority Leader Charles Schumer and other Congressional Democrats blocked that. Senate Democrats forced Trump to remove an authorization to expand the strategic petroleum reserve from the coronavirus relief bill, and boasted about it. As I noted at the time, “Their obstruction will likely cost America billions of dollars in lost profits.”

But the oil reserve is nowhere near full, and no effort was made to expand its capacity when oil prices were low. Now, there is too little oil in the reserve to have much effect on oil prices, and oil prices could be even higher — as high as $120 — in a few months. So now might not be the best time to sell the oil in the reserve.

Even at $100 per barrel, oil is still at less than half its 2008 peak. In 2008, oil reached $140 per barrel, which would be about $180 today, after adjusting for inflation. So although oil prices are somewhat high, there is no economic emergency necessitating a big release of oil from the reserve. Nor is there any military or geopolitical emergency. As Shaw notes, “The SPR is primarily designed for military purposes as a means to keep operations under way in case of oil-supply shocks; hence the term ‘Strategic.'” 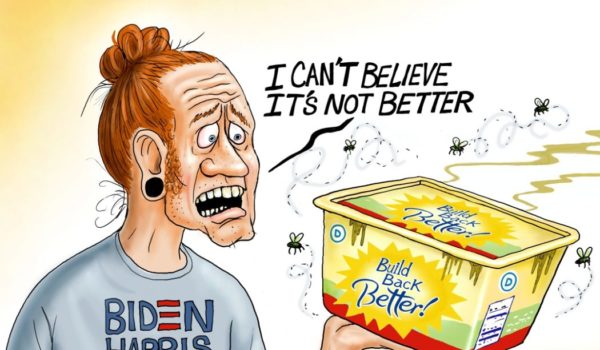 Cartoon of the Day: Spreads on Thick
Next Post
Nicotine helps with Alzheimer’s and Parkinson’s, study finds