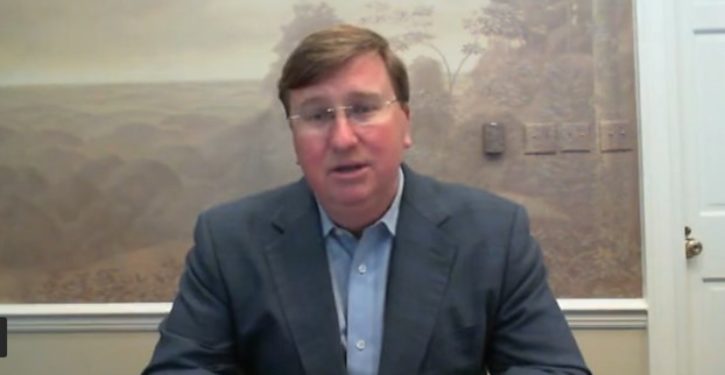 “Mississippi has become the latest state to ban Critical Race Theory from being taught in public K-12 schools and universities,” reports Campus Reform:

The new legislation states that public institutions cannot teach that any “sex, race, ethnicity, religion, or national origin is inherently superior or inferior” nor that individuals should be “treated adversely” on the basis thereof.

Furthermore, the bill prevents instructors from conducting a lesson that “compels students to personally affirm, adopt, or adhere to” the above description.

Violating this law could result in a school losing State Department of Education funding….”In too many schools around the US, CRT is running amok. It threatens the integrity of education & aims only to humiliate and indoctrinate,” [Reeves] stated. “That is why I signed legislation that will help keep CRT where it belongs- out of MS classrooms.”…According to Reeves, the push to adopt CRT in public classrooms is a move by a small number of activists who seek to “tear down the unity that has helped make [America] great.”

During a vote on the Senate floor in January, Black lawmakers protested the bill’s apparent passing by uniformly walking out of the chambers before the final vote was cast….”I’ve said it before and I’ll say it again, all elements of Mississippi and all elements of American history, both the good and the bad, should be taught in our schools, period,” Reeves stated.

Mississippi Public Policy Institute, a think tank, praised Reeves for making the bill law….Mississippi is now the fifteenth state to ban Critical Race Theory through legislative or executive action. Campus Reform has reported on the developing trend, tracking legislation from across the country…

Russian General Who Predicted Early Victory Killed
Next Post
Education schools no longer teach people how to teach, only how to be ‘woke’