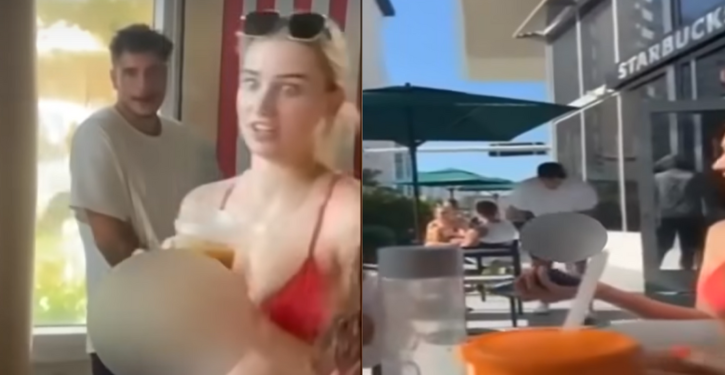 “Oh my God, oh my God, oh my God, can you stop? What the f**k is wrong with you?” Madison Doyle said as she filmed the man outside of the Starbucks, WPLG Local 10 reported Sunday. “What are you f**king doing?” Witness Alyssa Dimaria said in a video taken at the same establishment, according to Law and Crime.

The man in question is allegedly Blake Reign, 27, who touched himself publicly for at least 10 minutes while making eye contact with multiple witnesses, WPLG Local 10 continued. The events took place in the middle of the day at a local Starbucks, and police showed up fairly quickly and arrested Reign for lewd and lascivious behavior, the outlet reported.

Dimaria told WPLG Local 10 that, “he puts his hand in his pants, and there’s still, like, 30-plus people, 20-plus people in this Starbucks and everyone’s witnessing it.” (RELATED: Police Say They’re Searching For Naked Man Caught On Camera Stealing American Flag)

Doyle, who was visiting Miami with her friend Hailey McGookin, told WPLG Local 10 that the man was focused on them while they were inside the coffee shop and followed them outside for at least 15 minutes. McGookin told the outlet that Reign appeared to be in a mental state where there was “nothing there,” but when the police showed up, Reign became aware of the situation and “literally sprinted” away.

Reign was “combative” with police when they caught up to him, and they had to repeatedly use a taser and make other forceful efforts to arrest him, Law and Crime reported. When he appeared in bond court, Reign said he was from New York and was argumentative with the judge, claiming that he “didn’t commit what they said I committed,” at his hearing, as shown in the video.

Starbucks released a statement following the incident and told WPLG Local 10 that one of the store employees called 911 when they realized what was happening. Starbucks also told Law and Crime that “our partners (employees) took action and local authorities were immediately called.”