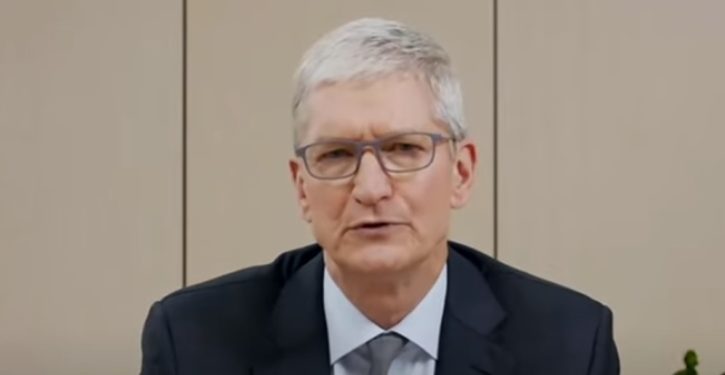 Western businesses have exited Russia in droves since the country’s invasion of Ukraine, often citing humanitarian reasons as justification — yet many continue to maintain healthy relationships with China.

Following Russia’s invasion of Ukraine, American and European companies, particularly in the technology and entertainment sectors, announced they would be restricting service and sales in the country, with many suspending operations altogether. However, many of these companies not only operate in China, but have been linked to alleged human rights abuses and forced labor of the Uyghur Muslim population.

Apple announced Tuesday it would no longer sell its products in Russia and that certain services would be suspended in the country, expressing solidarity with “all of the people who are suffering” from violence.

The American tech giant is active in China, where it manufactures many of its devices and sells to the Chinese market. It has also been alleged that Apple is complicit in the ongoing repression of Uyghurs; an investigation by The Information in May 2021 found that seven Apple suppliers were accused of using forced labor from China’s Xinjiang province.

The company has  previously lobbied on legislation aimed at curbing the use of forced labor in American supply chains. (RELATED: Amazon Whistleblower Who Was Imprisoned And Beaten In China Asks Company For Apology)

Apple reported $25 billion in revenue from the Greater China region in the first quarter of 2022 alone, almost as much as the company took in from the entirety of Europe, according to financial filings. The Chinese market was responsible for roughly 20% of the tech giant’s global revenue.

By comparison, Apple would lose roughly 1% of its global revenue by entirely exiting Russia, Politico reported.

Apple did not respond to requests for comment by the Daily Caller News Foundation; the company has previously condemned the use of forced labor and claimed it does not use it in its supply chains.

Rights campaigners stage a protest coinciding with the launch of the new iPhone 6s outside an Apple store in Hong Kong on September 25, 2015. Apple was urged to act as rights campaigners said a Chinese touchscreen glass supplier to the smartphone giant was exploiting factory workers. (AFP PHOTO / Philippe Lopez /Getty Images)

Another Silicon Valley giant, cloud computing company Oracle, publicly announced its exit from Russia Wednesday, citing “support of both the elected government of Ukraine and for the people of Ukraine.”

Oracle maintains a presence in China, employing “hundreds of developers” at “three centers in Oracle China” and conducting research and development in the Shenzhen economic zone.

The company has also been accused of aiding human rights abuses in China; The Intercept published an investigation in February 2021 purporting to detail an Oracle marketing plan to sell its software to Chinese authorities for use in a domestic surveillance campaign.

Oracle characterized The Intercept’s reporting as “deeply at odds with reality” and noted that the company has been reducing its presence in China over the past few years, claiming the outlet failed to provide any evidence that the plans were implemented. The company did not respond to the DCNF’s request for comment. (RELATED: Intel Bends Knee To China, Scrubs All Mentions Of Xinjiang Forced Labor From Letter)

U.S. clothing company Nike, which manufactures many of its products in China, has also been linked to forced labor, and has lobbied on bills that seek to excise Xinjiang slave labor from U.S. supply chains. The company said it was closing stores in Russia

The companies’ inconsistencies in their stance toward China and Russia have raised eyebrows among lawmakers such as Florida Republican Sen. Marco Rubio and Indiana Republican Rep. Jim Banks, who questioned their sincerity in comments to the DCNF.

Rep. Jim Banks (R-IN) speaks to the media with members of the Republican Study Committee about Iran on April 21, 2021 in Washington, DC. (Photo by Joshua Roberts/Getty Images)

“Corporations like Apple and Nike only seem to care about ‘human rights’ when it doesn’t seriously threaten their profit margin,”  Banks said. “These companies lobbied in favor of Uyghur slave labor. Recent PR stunts can’t erase their years of complicity in Communist China’s genocide.”

Banks, who chairs the Republican Study Committee, led the Countering Communist China Act which among other things restricts how certain American companies can do business with the Chinese state.

“China is Russia times a thousand. Their economy is way bigger, their military might is superior at this point,” Rubio said. (RELATED: US Tech Giant Apologizes To China After Telling Suppliers To Avoid Products From Xinjiang)

“Let’s not forget there are American companies and their CEOs who are basically lobbyists for the Chinese government’s position on a range of issues because they’re desperate for market share over there, because they’ve got factories and production over there,” Rubio added.

European companies with strong ties to China have also exited Russia, with German industrial conglomerate Siemens announcing it would be freezing business in Russia Wednesday and claiming to “fully support all sanctions” against the country.

Siemens has invested heavily in China, claiming the country is now the company’s “second largest overseas market” and that the company has “4,600 R&D and engineering staff in Greater China, and 21 R&D hubs, as well as nearly 11,000 active patents and patent applications” in the country. By comparison, Russia accounts for roughly 1% of Siemens’ global sales, according to Siemens spokeswoman Kathrin Stangl.

“Siemens cooperates exclusively with suppliers who are committed to combating forced labor – this applies globally,” Stangl told the DCNF.  “In addition, the auditing of our suppliers – also performed by external auditors – includes the topic of ‘respect of human rights’ and explicitly mentions ‘the prohibition of forced labor.’ 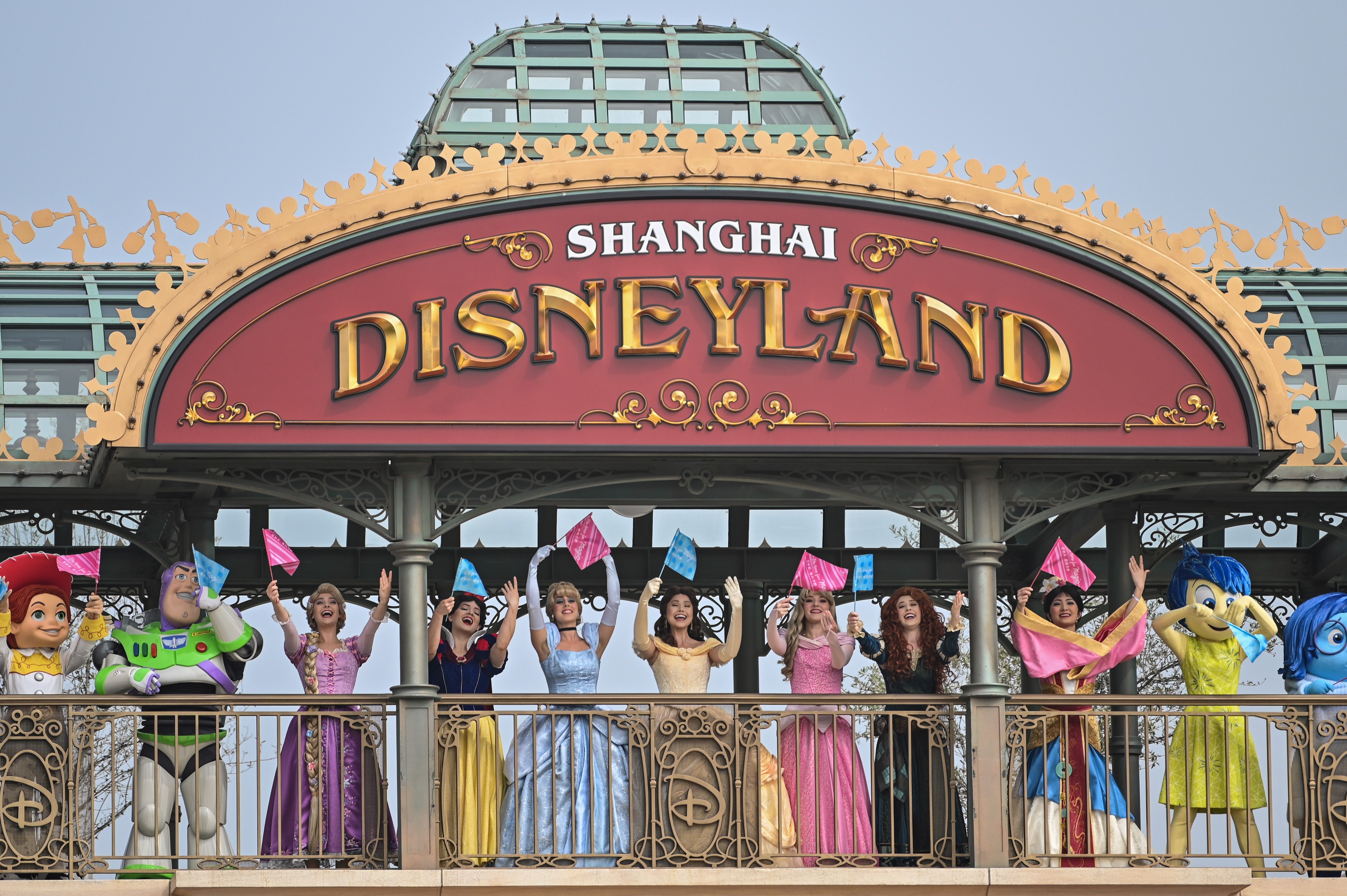 Performers dressed as Disney characters are seen during the reopening of the Disneyland amusement park in Shanghai on May 11, 2020. (Photo by HECTOR RETAMAL/AFP via Getty Images)

Disney said Monday it was pausing all new theatrical releases in Russia, citing “the unprovoked invasion of Ukraine and the tragic humanitarian crisis.”

“We will make future business decisions based on the evolving situation,” Disney said. “In the meantime, given the scale of the emerging refugee crises, we are working with our NGO partners to provide urgent aid and other humanitarian assistance to refugees.”

Disney has collaborated with China on several projects, most notably on a $5.5 billion investment to build the Shanghai Disney Resort and producing “Mulan”, which was partly filmed in the Uyghur home province of Xinjiang. The company has also allegedly censored content on behalf of the Chinese Communist Party, including a Simpsons’ episode referencing the Tiananmen Square Massacre.

Disney did not respond to the DCNF’s request for comment.

Video game titan Electronic Arts (EA) said it was removing the Russian national team and club teams from its popular FIFA and NHL franchises, claiming to stand in “solidarity” with the people of Ukraine and citing Russia’s invasion as justification for the move.

EA has not taken similar actions against China, and in fact operates a game studio featuring 463 staff members. EA did not respond to a request for comment.

American automakers Ford and GM both announced they were suspending operations in Russia Tuesday, though the companies cited a number of reasons including supply chain issues as justification for the decision.

“As part of the global community, Ford is deeply concerned about the invasion of Ukraine and the resultant threats to peace and stability,” Ford said in a statement. “The situation has compelled us to reassess our operations in Russia.”

Neither company responded to the DCNF’s request for comment.