Former President Trump is throwing hints out that he’ll likely make another run for the White House in two years.

And as President Biden’s poll numbers continue to tumble, former Secretary of State Hillary Clinton appears to be revving up her own campaign.

If both follow through, it would, in the words of the late great Yogi Berra, be “like déjà vu all over again,” complete with a Clinton scandal to spice things up.

But instead of centering on the 33,000 emails she destroyed from her State Department years that became the 2016 controversy, this new scandal suggests that her 2016 campaign illegally spied on the Trump campaign and even the Trump White House.

And just like 2016, instead of offering a defense, she attacked her accusers.

Trump & Fox are desperately spinning up a fake scandal to distract from his real ones. So it’s a day that ends in Y. The more his misdeeds are exposed, the more they lie,” she tweeted.

“For those interested in reality, here’s a good debunking of their latest nonsense,” she continued, and referred readers to a Vanity Fair article headlined, “You’ll never believe it but Hillary Clinton did not, in fact, spy on Trump’s White House.”

The Vanity Fair author was right about at least one thing — no one believes that she didn’t do it.

And last week she even tied the Russian invasion of Ukraine to the 45th president — suggesting that he enabled Putin’s aggression toward the former Soviet satellite state.

“We have to also make sure that within our own country we are calling out those people who are giving aid and comfort to Vladimir Putin, who are talking about what a genius he is, what a smart move it is, who are unfortunately being broadcast by Russian media, not only inside Russia, but in Europe to demonstrate the division within our own country,” Clinton told MSNBC “Morning Joe” co-host Mika Brzezinski.

John Solomon, CEO and editor in chief at Just the News, observed that attacking the messenger has been the Clinton modus operandi for decades.

“A quarter century ago as Whitewater prosecutors closed in on evidence that Bill and Hillary Clinton both gave factually inaccurate testimony, the then-first lady unleashed a blistering attack that stunned a capital city that in those days was far less rancorous,”

She called the Whitewater investigator a “politically motivated prosecutor who is allied with the right-wing opponents of my husband” that was ultimately “an effort to undo the results of two elections.”

Former Whitewater Independent Counsel Robert Ray, who drafted the final report accusing Clinton of lying, told Solomon that it’s important that the investigation into her campaign alleged spying of Trump continue — whether by Special Counsel John Durham or Congress.

The Clinton campaign’s decision to ramp up the Russia collusion hoax wasn’t “made, you know, just in a vacuum,” Ray told Just the News. “There were people who, obviously, were pulling those levers, and it’s not clear whether they’ll ever be able to hold those responsible, or accountable. But it doesn’t diminish the fact that this is important.”

Clinton’s been doing a lot of yelling and table-pounding lately.

Millionaire financier Epstein had allegedly engaged in sex trafficking, and provided underage girls for the rich and famous. That allegedly included former President Bill Clinton, whose name was reportedly found in multiple entries on the passenger manifest in Epstein’s private plane logbooks.

After hearing the news, Sen. Ted Cruz, R-Texas, had a question.

“Anyone know where Hillary was this weekend?” he asked. 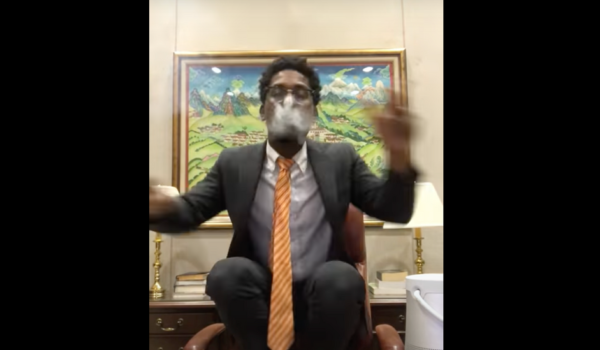 Diane Feinstein Staffer Dances In Her Office On Psychedelic Mushrooms While Smoking A Joint
Next Post
US To Lift Sanctions Against Terrorists, Human Rights Abusers As Part Of Iran Nuclear Agreement: REPORT