Transportation projects were already funded in ways that encouraged waste and increase costs. Thanks to a recent law pushed by Joe Biden, things will get even worse. Reason Magazine reports:

The $1.2 trillion Infrastructure Investment and Jobs Act, which President Joe Biden signed into law in November, shifts federal highway policy further away from the free market model of “user pays, user benefits” by requiring taxpayers to cough up more money for socialized roads. The infrastructure law, supported by legislators of both major parties, allocates about $54 billion a year to federally subsidized highways, which account for a quarter of all public roads in the U.S. That’s an increase from the roughly $45 billion included in the last highway bill. All told, the law authorizes $110 billion in new spending on roads and bridges.

Where will all that money come from? Not from road users, at least not directly. Biden’s (unevenly honored) commitment to not raising taxes on people earning less than $400,000 a year ruled out an increase in the federal gasoline tax. His administration also quickly nixed tolls and mileage-based user fees. Instead, the money will come from federal government’s general fund. That means taxpayers and/or buyers of federal debt will pay the tab for spruced-up bridges and rebuilt freeways, doubling down on a worrying trend.

For decades, federal highway spending was covered completely by federal gas tax revenue. Fuel taxes are not exactly a user fee, but they do at least charge people who drive for the roads they drive on. An even more market-oriented solution would involve giving private companies a larger role in building and maintaining highways and city streets while shifting the costs of those projects onto motorists, truckers, and other road users through tolls. Since 2008, however, a gap between gas tax revenue and mounting federal transportation spending has required a $157 billion infusion from the general fund. Even before the 2021 infrastructure bill was passed, the Congressional Budget Office was projecting that the gap would grow.

The infrastructure package did include a few modest reforms. It created a pilot program to study a mileage-based user fee, and it expanded private activity bonds, which help private companies raise capital for infrastructure projects. But the overall trend is toward more freeloading freeways.

It will increase the national debt, while wasting money on inefficient modes of transportation, and slowing down speeds on some roads, in the name of safety or community cohesion.

“About half of the transportation dollars in the bill are dedicated to Amtrak and urban transit, modes of transportation that carry less than 1 percent of passenger travel and no freight. While the other half appears to be dedicated to highways, much of that will be spent on projects that will reduce, not maintain or increase, roadway capacities,” notes transportation expert Randal O’Toole.

That includes money “to calm traffic and reduce vehicle speeds” or otherwise “slow or stop a motor vehicle.”

is the so-called highway safety improvement program. It would be more accurately titled the highway-congestion-increasing program as it provides billions of dollars in funding for projects aimed at slowing traffic and increasing congestion. This includes money for “medians, pedestrian crossing islands, protected bike lanes, and protected intersection features” and other projects “to calm traffic and reduce vehicle speeds” or otherwise “slow or stop a motor vehicle.” It is obviously ironic that one federal program seeks to reduce congestion while another seeks to increase it.

Another  potential “poison pill” is the infrastructure bill’s “reconnecting communities” program. It will allow the use of federal funds for “removing, retrofitting, or mitigating” any road “that creates a barrier to community connectivity.”

But greater community connectivity can mean more intersections, more stops, and slower traffic for motorists passing through a community. And it “sets a dangerous precedent that puts some vague definition of ‘community’ above the clear benefits of mobility.”

The national debt and the cost of transportation projects will rise as a result of the infrastructure package:

The bill is also larded up with provisions that will make infrastructure projects more costly for taxpayers….Like the Davis-Bacon Act, which requires that most workers on federally subsidized building projects are paid the local “prevailing wage” negotiated by unions, even if the workers themselves are not unionized—and only about 13 percent of construction workers are part of a union.

The Davis-Bacon Act rules can increase the costs of infrastructure projects by as much as 20 percent…NEPA reviews take more than four years on average, and they are frequently used as tools to block development for reasons that often have little to do with the environment. President Donald Trump had implemented some minor NEPA reforms before leaving office, but the Biden administration has already undone them. “Biden’s proposed NEPA changes only ensure that more federal money will be spent on red tape.”

While inflating the cost of actual infrastructure projects, the bill also promises to waste federal tax dollars on boondoggles like rural broadband internet. To justify $42 billion in subsidies for building out unnecessary fiber-optic lines, the bill cleverly changes the definition of “broadband” to make it look like fewer American homes have access to high-speed internet.

Other provisions in the proposal virtually guarantee that those subsidies flow to publicly owned networks rather than private ones. This seems to fulfill an ideological goal—making internet access more like a public utility rather than a private service is what many advocates of broadband spending seek—rather than a practical one….Friday’s harried negotiations over the infrastructure bill were, in the words of progressive Rep. Mark Pocan (D–Wis.), “a clusterf**k.” The same could be said about much of the final version of the bill too.

Is Putin Crazy? Russian President Rumored To Be Exhibiting Paranoia, Erratic Behavior
Next Post
Cartoon of the Day: An Inconvenient War 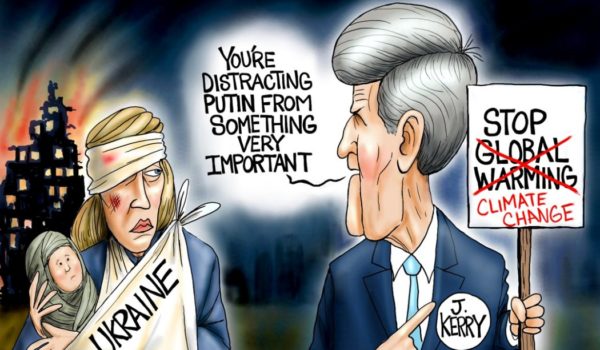