The annual Conservative Political Action Conference (CPAC), scheduled for Feb. 24-27 in Orlando, Fla., should be renamed “Trump-PAC” or “T-PAC.” That name more accurately reflects the pact between former President Trump and thousands of MAGA (Make America Great Again) activists who will gather to hear and cheer his every word.

At this three-day de facto mini-Republican convention, the former president tops a long list of officeholders, Trump Cabinet members, media stars — all loyal to him and scheduled to speak. Among them is embattled Rep. Matt Gaetz (R- Fla.) but without his national speaking tour partner, Rep. Marjorie Taylor Greene (R-Ga.). After recently learning the difference between “gazpacho police” and Gestapo, the firebrand congresswoman is not on the speakers list.

Also noticeably absent is former Vice President Mike Pence, who is, ironically, one of the few remaining authentic and traditional conservatives.

Purged from “T-PAC” and on the outs with the Republican Party are elected leaders unwilling to wave those now-infamous Trump banners and wear red MAGA hats. Most notable is Trump’s nemesis Rep. Liz Cheney (R-Wyo.) — who last addressed CPAC in 2020, the year Sen. Mitt Romney (R-Utah) was formally “disinvited” after voting to hear witness testimony in Trump’s first impeachment trial.

For 46 years, CPAC convened in the Washington, D.C., area. But in February 2021, a confluence of pandemic and politics prompted the move to Florida from blue suburban Maryland. The Sunshine State morphed into a GOP “Mecca” led by two Florida men – Donald Trump and Gov. Ron DeSantis (R) – whose growing rivalry could dominate this year’s CPAC.

After a barrage of Trump vs. DeSantis headlines, the media is itching for a CPAC showdown between the GOP’s unofficial kingmaker/leader – continuously teasing his 2024 presidential run – and the young rising star governor who looks to be a formidable challenger. Although Gov. DeSantis is up for reelection in November, he refuses to acquiesce to Trump’s demands that he publicly announce he will not run for president if the former president declares his candidacy.

At age 43, DeSantis is widely considered the party’s leading post-Trump nominee, but when will the “post-Trump” era begin? It is possible the answer could arrive on Saturday, Feb. 26, when CPAC’s straw poll results are announced — potentially the most consequential in the event’s history. Here’s the scenario:

The donor class and grassroots Republicans have often whispered and now more boldly say that they wish Trump would step aside and give DeSantis a clean shot at the next presidential nomination. Both are scheduled to address CPAC, with Trump’s smiling face given oversized top billing on the speakers page.

Underneath him, DeSantis’s presence is somewhat diminished in the headshot row with Sean Hannity, Glenn Beck and Sen. Ted Cruz (R-Texas). That graphics placement is hardly a coincidence since CPAC’s leaders, Chairman Matt Schlapp and his wife, Mercedes, are long-time Trump allies.

During Trump’s speech, attendees will give him the rock-star treatment, but are they ready to store his baggage and move ahead? That sentiment can be quantified in CPAC’s straw poll. Through the CPAC app, attendees vote once for who they think should top the 2024 ticket. A surprise outcome would explode headlines with days of punditry.

As a baseline, let’s review the outcome of CPAC’s 2021 straw poll from last February. The Hill reported Trump won “55 percent of respondents saying they would vote for him in a hypothetical 2024 primary” and “21 percent said they’d vote for DeSantis.” But, with Trump off the “primary ballot,” DeSantis earned 43 percent, with South Dakota Gov. Kristi Noem (R) at 11 percent.

A year later, with DeSantis significantly raising his name ID and national profile, Trump has disparaged the popular governor. The former president said he would defeat DeSantis in a primary, bragged he was responsible for Ron’s success, called DeSantis “dull,” lacking in “personal charisma,” and indirectly accused him of being “gutless.” (The latter was thoughtless since DeSantis, then an active-duty Navy officer, won a Bronze Star serving as the legal adviser to Seal Team One in Fallujah, Iraq.)

As usual, Trump must attack any new shiny car coming on fast in his rearview mirror. And, if during his CPAC speech Trump sarcastically demeans DeSantis, that will guarantee endless rivalry stories.

Most important, the straw poll results could be problematic for Trump. Here is a range of possible outcomes to the question asking, “Who would you vote for on the 2024 Republican primary ballot?” — with some Trump reaction “thoughts”:

Trump 55 percent to DeSantis 21 percent: “Same as last year. I’ve got this! States must not waste money on 2024 primaries.”

Trump defeats DeSantis by 10 percentage points or less: “Time for a nickname, DwarfSantis?”

All joking aside, Trump must dominate the straw poll to maintain his GOP kingship. But DeSantis only needs to up his last year’s 21 percent performance by 10 points for tongues to wag and headlines to scream “horserace.”

Could T-PAC turn into De-PAC? Watch for the first 2024 GOP “primary” results with Trump and DeSantis going “mano a mano” in the CPAC ring — fighting for the future of the Republican Party in an Orlando, Florida, hotel close to Disney World.

For Ron DeSantis, CPAC 2022 could be “the most magical place on Earth.” 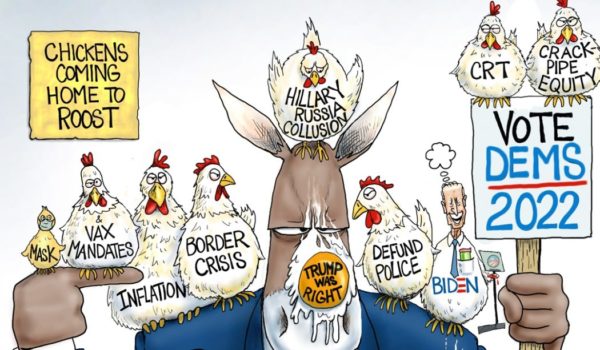