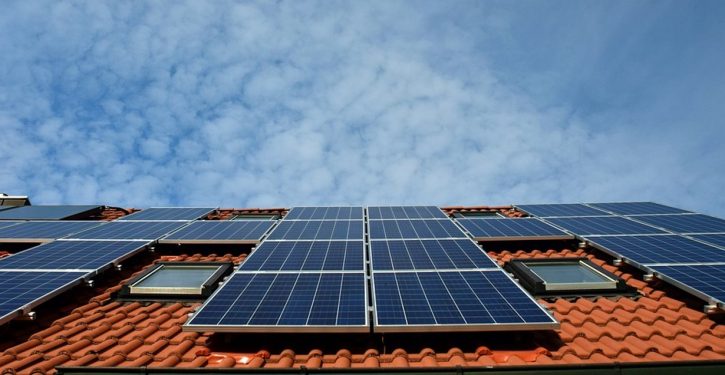 As Reason observes, “the overall goal is the same as it was under Trump: to raise the price that consumers will pay for imported solar panels and their component parts.”

These higher prices are at odds with the White House’s other goal, to get Americans to use more solar energy. That goal is a critical element of the White House’s blueprint to combat climate change. The Biden administration “wants solar energy to account for half of all American energy production by 2050….a major component of Biden’s “Build Back Better” plan is a new tax credit for residential solar panel installations.”

But as Reason notes,

The only way that will happen is with imported solar panels and solar cells. The U.S. is expected to expand solar production by about 30 gigawatts this year and 32 gigawatts in 2023, according to the trade publication Solar Power World. But domestic production can only supply about 8 gigawatts’ worth of solar panels annually.

The administration wants to force consumers to pay higher prices to please domestic solar companies (which petitioned the White House to extend the tariffs), then use tax dollars to offset the artificially higher prices with tax credits for consumers…. When Trump first levied these solar panel tariffs, the outcry from environmental groups was significant. The Environmental Defense Fund slammed the domestic producers who asked for the tariffs for prioritizing their bottom lines over the climate. “The planet could suffer, because every kilowatt of zero-carbon solar energy that isn’t installed is a kilowatt that will likely be replaced by electricity generated by dirty, fossil fuel,” wrote Lenae Shirley, the group’s senior director of technology, innovation, and market adoption. The Sierra Club likewise condemned Trump’s tariffs as “a move that could upend the U.S. solar installation industry, which depends overwhelmingly on Asian-made panels.” Neither group has made an official statement (or even a Twitter post) about Biden’s decision to extend those tariffs.