That’s the title of an interesting article by Robby Soave in Reason Magazine, about how Hispanic kids were given an unpleasant dose of critical race theory by a California school district:

During the 2020 fall semester, Kali Fontanilla—a high school English language teacher working in the Salinas, California, school district—noticed that many of her students were failing one of their other classes: ethnic studies…Salinas has a majority Mexican population; all of Fontanilla’s students were Hispanic and were learning English as a second language….”My students are failing ethnic studies,” says Fontanilla, who is of Jamaican ancestry. “I would say half of them are failing this ethnic studies class.” This made Fontanilla curious about what the course was teaching. All of the high school’s teachers used the same online platform to post lesson plans and course materials, so Fontanilla decided to take a look. She was shocked by what she saw. “This was like extreme left brainwashing of these kids,” says Fontanilla. “Critical race theory all throughout the lessons, from start to finish. The whole thing.”

Critical race theory, or CRT, has become a flashpoint in the debate about what kids ought to be learning in public schools. Originally an obscure, left-wing body of thought that mostly appeared in graduate schools, critics charge it with influencing diversity workshops for major corporations, training seminars for teachers, and even K-12 curricula….Many adherents of CRT deny that it’s taught to primary education students, and the mainstream media have been quick to line up behind such claims. That’s why Fontanilla’s discovery was so significant. “The teacher had the kids all learn about the four I’s of oppression,” says Fontanilla. The four I’s were institutional, internalized, ideological, and interpersonal oppression. “And then there was a whole presentation on critical race theory and they actually had the students analyze the school through critical race theory.”

Slides from lesson plans provided by Fontanilla confirm that the ethnic studies course references critical race theory by name. The original meaning of the theory, at least when taught at the college level, is that racism so pervades U.S. society and U.S. institutions that it is impossible to separate race from other issues: All policies, structures, and laws were built under the auspices of racism, a sort of original sin that shapes the country’s institutions. In common parlance, opponents often use the term “CRT” to refer a broader set of concepts, like intersectionality—the idea that there are different kinds of oppression that all stack on top of each other—and privilege.

“The kids don’t even want this stuff,” says Fontanilla…”Most of them are just like, ‘Why do we have to take this class?'” They would have to direct that question to California Gov. Gavin Newsom and the state’s Democratic-controlled legislature, which decided to mandate ethnic studies for all public schools…. Beginning with the class of 2030, all public high school students in California will now have enroll in the same sort of course that Fontanilla’s students already took.

Twenty percent of urban school teachers report having discussed or taught critical race theory with K-12 students, as have 8 percent of teachers nationally, according to an Education Week survey.

Georgetown Professor Placed On Administrative Leave After Blasting Biden’s Vow To Elect Black Woman To SCOTUS
Next Post
Cartoon of the Day: Here’s His Sign 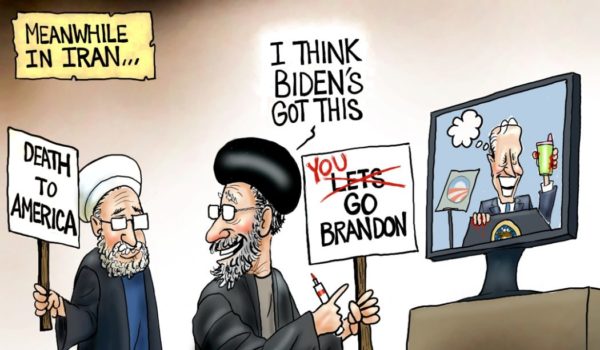