A 26-year-old convicted of violently sexually assaulting a 10-year-old child will be placed in a juvenile facility, despite being an adult and having committed violent crimes in multiple states.

Hannah Tubbs, who identifies as a transgender female, sexually assaulted a girl in a restroom eight years ago when Tubbs was just two weeks away from turning 18. At the time, Tubbs identified as male and used the name James, not Hannah. Tubbs grabbed the child by the neck, shoved her into a school bathroom stall, and assaulted her.

Tubbs did not identify as female until after being taken into custody years later.

As a TV station in Los Angeles (ABC7) explains,

The violent crime happened just before her 18th birthday, and Tubbs remained free of charges until the DNA match.

Hannah Tubbs, who identifies as a transgender female, has a lengthy criminal record including violent crimes in multiple states.

The violent crime happened just before her 18th birthday, and Tubbs remained free of charges until the DNA match.

The case was prosecuted in juvenile court and was not transferred to adult court due to Los Angeles County District Attorney George Gascón’s policy that states juveniles won’t be prosecuted as adults. A juvenile judge sentenced Tubbs to two years in a juvenile facility…. the judge stated that essentially, under current legislation, a person who commits a crime as a juvenile and is jailed in a juvenile facility once they turn 19, the court has no authority to transfer that person to an adult facility….Tubbs could have been sentenced to almost a decade in prison if she was tried and convicted as an adult.

Gascón is consistently soft on crime, and would not have tried Tubbs in adult court even if Tubbs were not transgender. He refuses to try people who committed crimes at age 16 or 17 in adult court, even when they commit aggravated murders. So teenage serial killers will not be held beyond age 25, no matter how many people they kill. Short sentences for juveniles result in higher crime rates and higher recidivism rates. As Peter Moskos notes, “Recidivism among 16-year-olds went up” when the age for being prosecuted in adult court was raised. The recidivism rate for 16-year-olds rose from 39% to 48% for offenses generally, and from 18% to 27% for violent felony offenses.

And Gascón refuses to seek sentence enhancements mandated by California law. For example, Gascón ordered prosecutors in Los Angeles County not to seek the sentencing enhancements approved by California voters in Proposition 8. That ballot initiative increased penalties for repeat offenders who commit willful homicide, forcible rape, robbery, and aggravated assault with a firearm. Prosecutors responded by bringing a lawsuit challenging Gascón’s order banning sentence enhancements. Gascón also will not let prosecutors in his office seek the death penalty under any circumstances.

Longer sentences are needed to deter crime, and keep crime rates down. Crime in California fell significantly after California voters adopted Proposition 8, which mandated longer sentences for repeat offenders. A National Bureau of Economic Research study found those longer sentences deterred many crimes from being committed. As it observed, three years after Proposition 8 was adopted, crimes punished with enhanced sentences had “fallen roughly 20-40 percent compared to” crimes not covered by enhanced sentences. Sentencing enhancements prevented crime by dissuading people outside of prison from committing crimes, not just by keeping convicted criminals in prison where it’s harder to commit a crime.

Dark money heavily favored Democrats in 2020
Next Post
Cartoon of the Day: Birds of a Feather 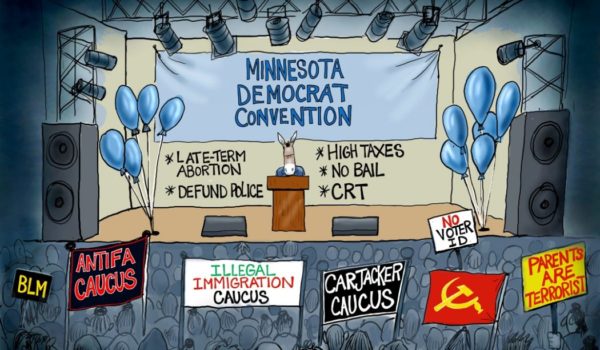