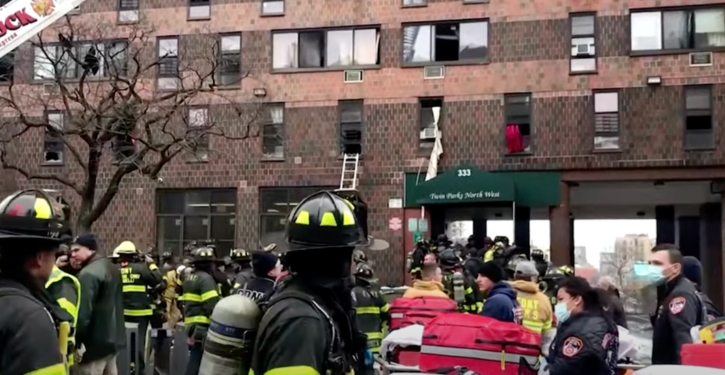 A fire broke out Sunday in a high rise building in the Bronx, killing at least 19 people, including nine children.

At around 11 a.m., the fire broke out in a duplex apartment on the second and third floors of the building, which is located on East 181st Street, according to the NYT. Firefighters arrived on scene within three minutes, but the smoke from the fire extended throughout the entire 19-story building, reported the outlet. (RELATED: Massive Fire Burns For 14 Hours In Texas As Firetrucks Struggled To Find Water)

“What we do know is the door to the fire apartment was left open, which allowed the fire and smoke to spread,” Nigro said during a press conference.

Approximately 200 FDNY members are operating on scene of a 5-alarm fire at 333 East 181 Street in the Bronx. There are currently 31 serious injuries to civilians. pic.twitter.com/yrTYwOfonH

Of the 200 firefighters on scene, four of them were injured, reported Fox News. There were approximately 60 people injured in the building’s fire, 32 of whom are facing life-threatening injuries, in addition to 19 fatalities, according to the outlet.

“[FDNY] members found victims on every floor in stairways and were taking them out in cardiac and respiratory arrest,” Nigro said to the press. “We expect numerous fatalities.” (RELATED: Teenagers Survive Deadly Fire By Sliding Down Pole Outside Of Building)

FDNY’s Twitter page published photos of their members on-scene. A number of shattered windows can be seen in the photo, as well as black residue stained on the building’s concrete exterior from the smoke. In one photo, a latter extends from a fire truck into a 7th floor window.

One of the building’s residents, Fatima, spoke with ABC7 and explained that she had to enter a neighbors apartment and wait for firefighters to rescue them.

“It was a lot of smoke so we had to stop at the sixth floor and we were able to get into a neighbor’s home,” she said. “We stayed there until the firefighters came and they were able to guide us out.” (RELATED: Watch This Firefighter Catch A Three-Month-Old Baby Dropped From Second Floor of Burning Apartment)

New York City Mayor Eric Adams said the Bronx fire “one of the worst fires we have witnessed,” according to the FDNY’s social media page.

“This is horrific, horrific, painful moment for the City of New York. The impact of this fire is going to really bring a level of pain and despair to our city.”

New York Gov. Kathy Hochul took to Twitter to express her thoughts on the apartment fire, stating that she is “horrified” by what happened. (RELATED: Woman Sets Man’s Apartment On Fire, Tries To Kill Him Because He Came To Date With Only $5)

“My heart is with the loved ones of all those we’ve tragically lost, all of those impacted and with our heroic @FDNY firefighters,” she wrote. “The entire State of New York stands with New York City.”

The origin of the fire is under investigation, Fox News reported.