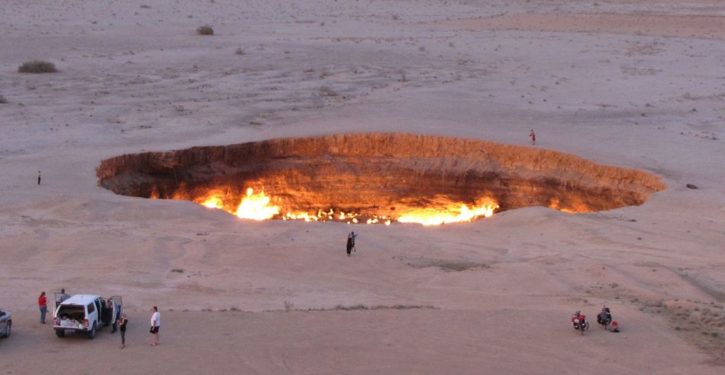 President of Turkmenistan Gurbanguly Berdymukhamedov announced Saturday that he wants to close the country’s internationally-famous Darvaza Crater, colloquially known as the “Gates of Hell.”

Berdymukhamedov said on state television that he told officials to “find a solution to extinguish the fire” at the “Gates of Hell,” citing health, environmental and economic concerns, according to Newsweek. The state-run newspaper Neytralny Turkmenistan reported Berdymukhamedov ordered his deputy prime minister to “gather scientists, and if necessary, to attract foreign consultants and find a solution for extinguishing the fire,” as translated by CNN.

A picture taken on May 3, 2014, shows people visiting “The Gateway to Hell,” a huge burning gas crater in the heart of Turkmenistan’s Karakum desert.  (Photo credit should read IGOR SASIN/AFP via Getty Images)

The crater, known for its constantly-burning pit, has been on fire since the 1970s and is an attraction to the few tourists the country lets in. (RELATED: Turkmenistan Bans Use Of The Word ‘Coronavirus’)

“We are losing valuable natural resources for which we could get significant profits and use them for improving the well-being of our people,” the president said on state television, adding that the crater “negatively affects both the environment and the health of the people living nearby,” according to AFP. Berdymukhamedov had previously asked experts to extinguish the gas crater in 2010, the outlet reported.

The crater’s origin is disputed, but many believe that it was a Soviet natural gas mining expedition that collapsed. Geologists allegedly lit the gas on fire to halt its spread, though the flames continue burning to this day, Vice reported.