Fox News reports that the Biden administration cut off distribution of life-saving anti-coronavirus drugs based on bad data about which strain of the coronavirus was infecting the most Americans:

A doctor in Maryland said he had to cancel potentially life-saving monoclonal antibody infusions for about 250 people over the last week after the federal government stopped distributing treatments made by Regeneron and Eli Lilly because they aren’t effective against omicron, even though the delta variant, which the drugs are effective at treating, was still dominant at the time.

The Office of the Assistant Secretary for Preparedness and Response halted the allocation of those two antibody treatments last Thursday amid the rise of omicron, which the CDC had said days earlier was responsible for 73.2% of all new cases.

But the CDC backtracked on that alarming estimate this week, revising it down to just 22.5% … The delta variant, which Regeneron and Eli Lilly’s treatments are effective against, was actually responsible for 77% of all new cases when the federal government stopped distributing those antibody drugs.

“I am as angry as I possibly can be about this,” Dr. Ron Elfenbein, the medical director of FirstCall Medical Center. “People are definitely going to die because of this or need hospitalization because [health officials] misread the statistics.”

In other news, some state officials are discriminating against whites in access to this life-saving medical treatment. “NY State Department of Health warns they don’t have enough Paxlovid or Monoclonal Antibody Treatment and white people need not apply,” notes the New York Post’s Karol Markowicz. As the New York State Department of Health explains, “Non-white race or Hispanic/Latino ethnicity” is a “factor” that can qualify you for access to “antiviral treatment” such as Paxlovid or molnupiravir.

This Spring, health officials in some states like Vermont gave racial minorities preference in access to the coronavirus vaccine, even though that was unconstitutional.

Here is a screenshot of the New York State Department of Health discussing its use of race as a factor in doling out antiviral treatments like Paxlovid: 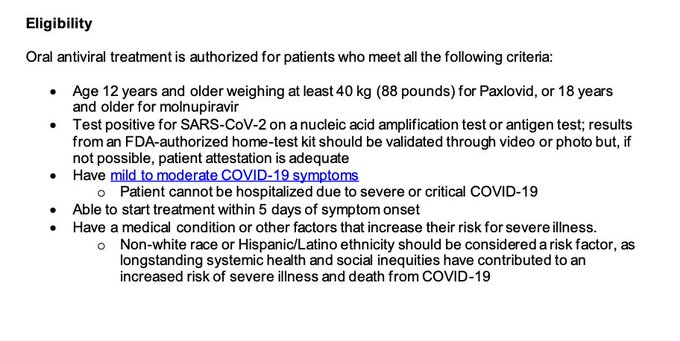 This use of race as a factor is unconstitutional. The Supreme Court has ruled that preferences for racial minorities are presumptively unconstitutional, and that even if minority groups have faced “societal discrimination,” that is not a reason to give them a preference. (See Richmond v. J.A. Croson Co. (1989)).

A state can give minorities a preference in access to a benefit only when there is evidence that the state itself has recently discriminated against them in that area. (See Hammon v. Barry (1987); Brunet v. Columbus (1993)). That means evidence of widespread discrimination by the state, not just a few individual instances of discrimination. (See Middleton v. City of Flint (1996)).

And it can only give a preference to the particular minority group it discriminated against, not every “non-white race.” For example, a history of discrimination against blacks doesn’t justify a preference for Asians or Pacific Islanders. (See L. Feriozzi Concrete Co. v. Casino Reinvestment Dev. Auth. (2001)).

Even if certain minorities were more likely to have risk factors for COVID-19, New York State would still not be allowed to give those minorities a preference, or use their race as a proxy for such risk factors. The Supreme Court says the government is only allowed to use race as a “last resort,” after race-neutral remedies have been tried. (See Bartlett v. Strickland (2009)).

Smokers are much more likely to quit smoking if they vape every day
Next Post
Setbacks, Inconsistencies Mount For CDC Under Walensky