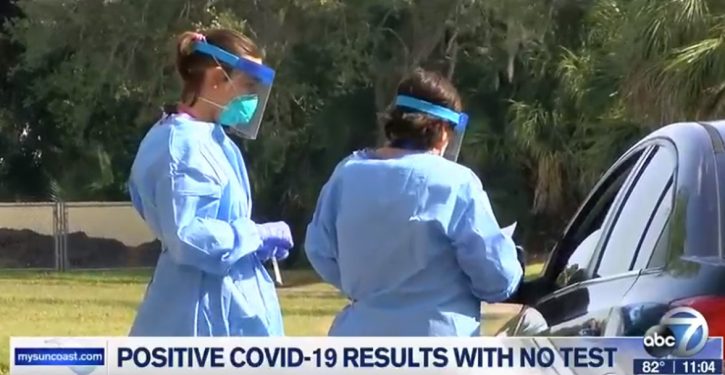 In Europe, dozens of cheap tests for COVID are available, that can tell you almost immediately whether you have the coronavirus, and cost very little. But Biden’s FDA officials have made no attempt to get them approved, even though experts in Europe have already approved them. As science writer Ron Bailey has noted, “the reason that Americans don’t have access to cheap, fast COVID-19 self-tests right now is because the hypercautious regulators at the Food and Drug Administration (FDA) have been ridiculously slow to approve such tests. In fact, many of the self-tests widely and cheaply available now in Europe were developed here in the U.S. As the pandemic has worn on, FDA incompetence stymied the competitive processes that in private markets would have provided cheap, fast COVID-19 self-tests.”

Now, it’s being reported that experts approached the White House with the idea to produce millions of COVID tests in time for the holidays — but were turned down by the Biden administration. This week, the Biden administration promised it will make 500 million tests available to the American people — but as the New York Times reports, “Americans will have to wait” weeks or more before that happens.

Biden told ABC he wished he’d thought about ordering 500 million test kits months ago. The implication was thought nobody had raised that idea with his administration until recently.

But members of his staff were briefed months ago about just such a proposal. Vanity Fair describes “a proposal made to the White House in October — two months ago — to produce 700 million rapid tests per month. The experts behind it were looking backward and looking ahead, remembering last year’s brutal winter wave and hoping to mitigate the next one. Cold weather plus holiday gatherings equals rampant spread with or without a super-contagious new variant and the pros were hoping to get ahead of it. ‘Testing Surge to Prevent Holiday COVID Surge,’ reads page one of their 10-page plan.”

Can’t be done, the Biden administration told them. Especially since the slow-moving FDA has gotten around to approving only a fraction of the test kits submitted by manufacturers.

“So it wasn’t a matter of the president not having thought ahead about the need for rapid tests. It was a matter of his team considering, and then rejecting, a plan to do exactly that,” notes Hot Air. “Why wasn’t increasing manufacturing capacity for tests a priority for the White House when Biden took office? And why hasn’t the FDA adjusted its protocols for approving tests during the pandemic given the urgent demand for them?”

“The incompetence is scandalous, and not just because they failed to anticipate what might happen if a new immune-evasive variant exploded in the U.S. According to VF’s sources, the White House may have deliberately held back on testing because — you guessed it — they feared that making tests widely available would give vaccine holdouts an excuse not to get their shots. Now we’re facing a strain of the virus whose spread can’t be stopped by vaccination, only by isolating the infected, and we don’t have the weapon we need to figure out who’s infected,” Hot Air notes.

The Centers for Disease Control and Prevention assured Americans early this summer that, once vaccinated, they could shed their masks and forgo testing. Those declarations quickly proved untrue as breakthrough infections have risen. “We put all our eggs in the vaccine basket and it’s not enough,” Dr. Jay Wohlgemuth, chief medical officer at Quest Diagnostics, told Vanity Fair.

Three experts who interacted with the White House came to believe that the Biden administration had deprioritized rapid testing,

Hot Air says “The Biden administration bought the hype in May that vaccination was about to end COVID and got blindsided when Delta and then Omicron, two variants that can puncture immunity, appeared. ” “This is a failure of imagination, and failure of leadership is in large part why we’re here,” Leana Wen told the Washington Post.

Hot Air says it “would be bad enough if the White House had said no to a testing ramp-up for the first time in October, but that wasn’t the first time.” According to the Washington Post, they had rebuffed earlier offers as well:

Some in the Biden administration did worry that the White House was being shortsighted. In the spring, well before delta took hold, a group of health-agency officials approached the White House to urge the purchase of millions of rapid tests, according to five senior administration officials who spoke on the condition of anonymity to share internal discussions.

They warned that without government intervention, the kits would remain hard-to-find and exorbitantly priced. The White House never followed up on the proposal.

Even that wasn’t the first time Biden was warned about testing. Vanity Fair cites a document that was sent to the Biden administration all the way back in January “outlining a national rapid-testing strategy that they argued would enable the country to reopen safely even before the vaccine rollout was complete. It made a case for rapid testing as the most powerful tool to reduce transmission and case counts quickly.”

As Hot Air notes, “That was Biden’s chance to follow Trump’s lead on vaccines by organizing his very own Operation Warp Speed for testing. Nothing came of it.”

Democrats Are Pushing For Student Loan Forgiveness. Who Would It Benefit?
Next Post
Ambushed Baltimore Officer Taken Off Life Support